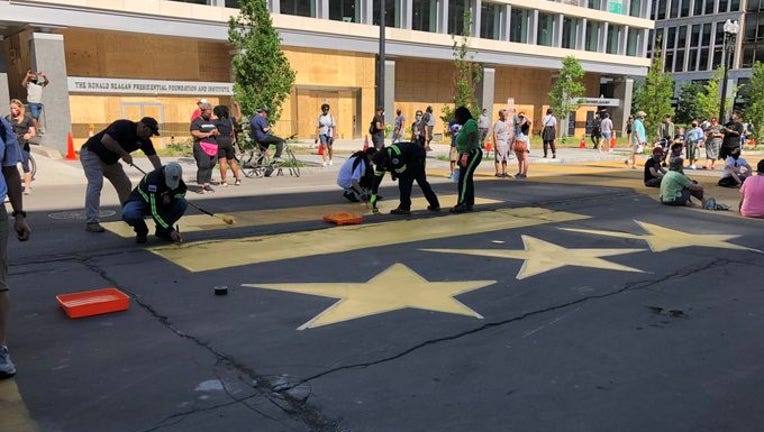 The District's Department of Public Works tells FOX 5 that the surprise message painted by activists next to DC's massive BLACK LIVES MATTER mural will not be removed.

Crews will however repaint the DC flag in the mural so that it will no longer read BLACK LIVES MATTER = DEFUND THE POLICE.

Activists across the country have called for reallocating police funding to communities of color in an effort toward police reform and neighborhood investment. Some activists have even called for abolishing police departments in lieu of community-led public safety initiatives.

The District of Columbia spends more than half a billion dollars on its police department every year.

In Minneapolis, activists drove Mayor Jacob Frey out of Saturday's demonstration after he refused to back police defunding initiatives.

RELATED: Crowds kicks Minneapolis mayor out of rally for not backing defunding the police department

While Mayor Muriel Bowser's decision to repaint and dedicate a stretch of 16th Street NW near the White House as Black Lives Matter Plaza is inspiring to many, local Black Lives Matter activists say it's a "performative" stunt that distracts from the push for reform.

Mayor Bowser has yet to publicly state whether she will act on the renewed call to defund the Metropolitan Police Department.