Watch: Dolphins stun fish by launching them into the air

A dolphin will flip a fish far into the air using its tail fin, called the fluke.

Scientists have long studied the intelligent and social behaviors of dolphins.

According to the Florida Fish and Wildlife Conservation Commission, inshore dolphins like the ones often seen around the Bay Area, travel around in groups and work together to find and catch food.

Dolphins that hunt for fish in the shallow waters of Tampa Bay have been observed trapping mullet by swimming circles around a school of mullet, creating a muddy net, which the mullet try to escape by jumping into the air. This makes the mullet an easy target for a dolphin’s open snout.

Dolphins also use a technique, which requires less effort and is probably more fun, to catch prey. A dolphin will flip a fish far into the air using its tail fin, called the fluke. 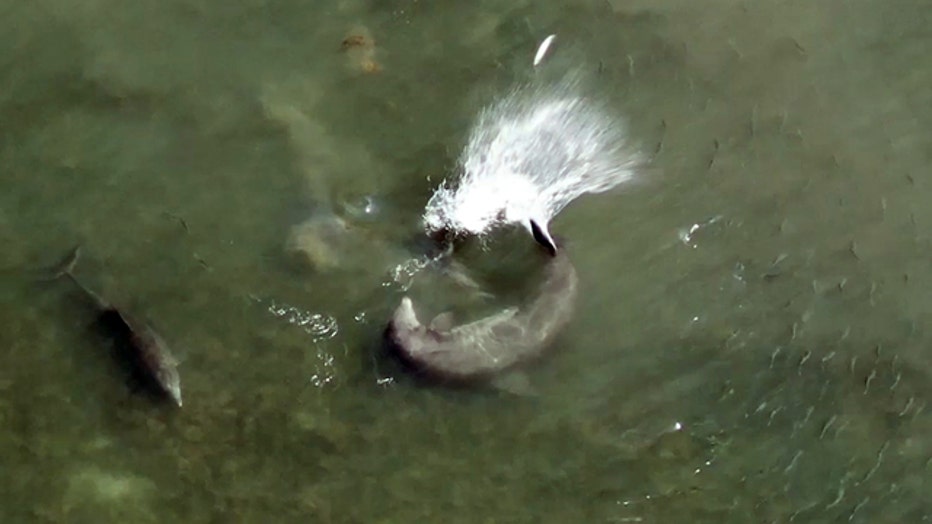 The fish becomes stunned or injured, making it easy for the dolphin to scoop into its mouth.

Watch: Dolphin chases down its meal.

Many onlookers have captured this behavior from water level, but new drone video from Michael McCarthy at See Through Canoe shows how the trick works from above.

The video, taken near Fort De Soto Park in Tierra Verde, Florida, shows several dolphins swimming among a school of fish, occasionally flipping one into the air and then swimming over to retrieve its stunned prey.

On one occasion, a dolphin’s flipped fish lands right next to another dolphin, which happily accepts the easy meal, but is then chased by the dolphin for which the fish was intended.

Luckily, there seemed to be plenty of fish around for every dolphin to have a meal.