ARLINGTON, Texas - There was an intentional grounding penalty against Carson Wentz, and the two interceptions for Washington's defense that got wiped out by penalties. And those were only a handful of the mistakes for the Commanders.

Maybe that season-opening victory for Wentz in his return to the NFC East was a false start.

"I go in this locker room after the game and guys are frustrated. Guys are obviously not happy about it," Wentz said, adding that he can see it in their eyes that they are hungry to learn, get better and win.

The Commanders (1-3) are back at the bottom of the division after three consecutive losses, the latest a penalty-marred 25-10 setback against the Dallas Cowboys on Sunday.

"I don’t think surprise is the word. Disappointed," defensive tackle Jonathan Allen said of their start. "We know what kind of team we have and we’re the only ones in this world that believes in us and who we can be. I mean, you are what you put on film. So at this point we’re 1-3. Long season ahead." 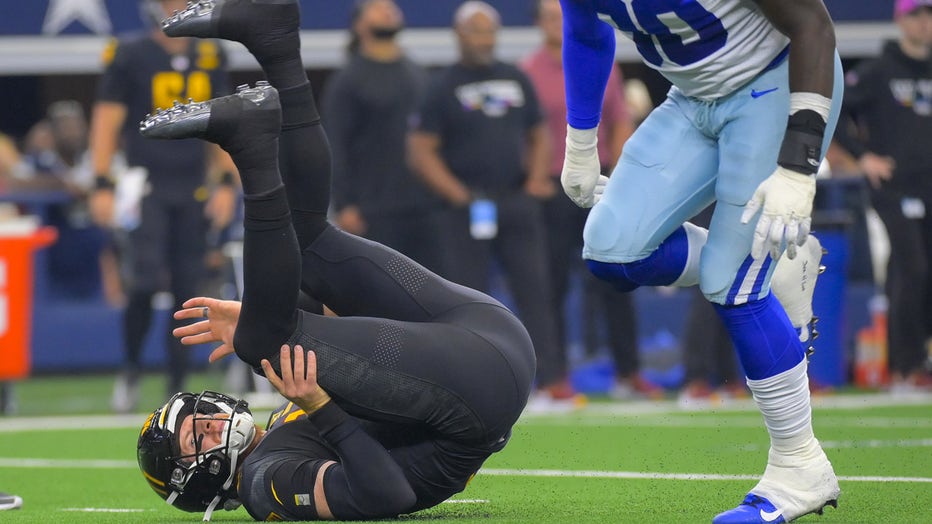 Washington Commanders quarterback Carson Wentz (11) rolls on the ground after being pushed by Dallas Cowboys defensive end DeMarcus Lawrence (90) during the first quarter the game at AT&T Stadium on October 2, 2022. (Photo by John McDonnell/The W

A week after Wentz was sacked nine times in a loss to division rival Philadelphia, the Commanders outgained the Cowboys (297 total yards to 279) and averaged 5.3 yards per rushing attempt. But they were plagued by 136 penalty yards — eight more than they had combined the first three games.

"I think this team stands where it’s time to take another step," third-year Washington coach Ron Rivera said. "You look at the players and then some of the things that go on. You watch the entirety of the game, play by play by play by play, and you see enough that tells you they should play better. ... We’ve got to get going."

Allen said the team wasn't going to turn on each other and start making excuses. At the same time, he described the officiating as "horrible" and "one-sided," but adding that isn't why they lost.

"It helped, but that’s not the reason why we lost," Allen said.

The Commanders had a 7-6 lead when Wentz threw a 10-yard touchdown to Jahan Dotson midway through the second quarter. Three plays later, Benjamin St.-Juste intercepted a pass near midfield, but was penalized for illegal contact instead.

Down 12-7 early in the second half, Washington’s defense had the Cowboys backed up to their own 8 when Kamren Curl had what appeared to be another interception — again wiped out by penalty, this one a defensive holding call against William Jackson III. The cornerback also was flagged twice for pass interference against receiver Michael Gallup — for 38 and 27 yards.

Rivera said he understood one of the pass interference calls, since Jackson got his hand up when he went for the ball after running stride-by-stride with Gallup.

Wentz finished 25-of-42 passing for 170 yards with two interceptions. The second overall pick by Philadelphia in 2016 had 650 yards passing and seven touchdowns in his first two games back in the NFC East, after last season with Indianapolis. He had 211 yards passing against his former team.

"Well, I thought he had his moments," Rivera said of Wentz's latest performance. "But again, it’s the same thing, we’ve got to sustain the success that we’re having."