A man running to lead Prince William County tried to delete his old tweets, but his efforts backfired.

John Gray is the Republican candidate running to chair the Prince William County Board of Supervisors.

His attempts to scrub his Twitter feed only tipped off his opponent to track down his old tweets that ended up still being online.

Tweets like one calling Hillary Clinton “uglier than sh--,” and another about Clinton saying, “Can you imagine being so desperate as to even WANTING to have sex with HRC, more or less even doing the deed with her? OMG. Shrivels me up!”

Other tweets call the NFL the “Neeling Felons League,” and state that “Afroamericans voted Obama only because he is black.” Another says: “Bible verse of the day: Give a man a fish and he eats for a day. Deport him and you don’t have to feed him again POTUS 20:16.”

Gray’s opponent, Democrat Ann Wheeler, said her campaign found out Gray attempted to delete tweets when they looked through his campaign finance records and found two payments of $15 to “Tweetdeleter.” 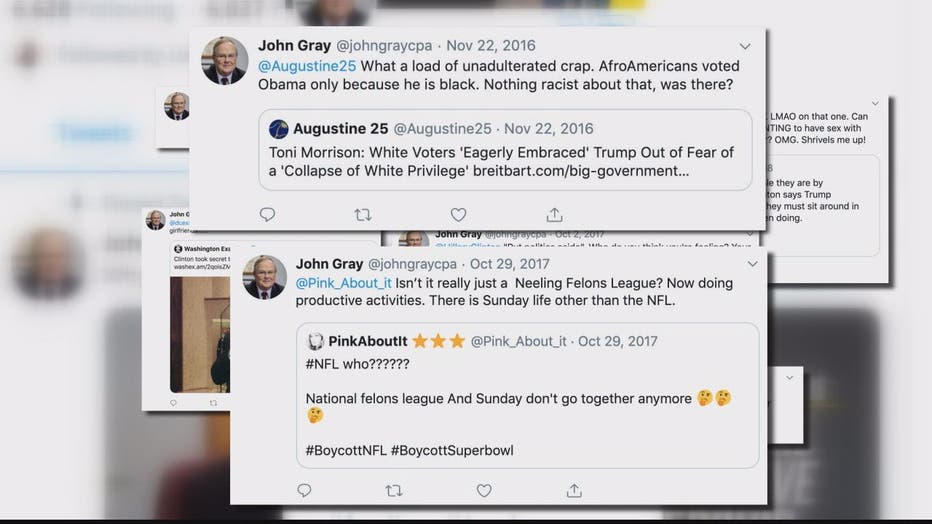 The Tweetdeleter website claims to be a one step solution to delete old tweets. While Gray did wipe clean old tweets from his own Twitter page, Wheeler’s campaign quickly realized the tweets were still online and easy to find by searching Gray’s Twitter handle.

Wheeler said what they found surprised her.

“I didn’t realize that he was that extreme,” Wheeler said. “He’s been running for office and he has some vocal opinions on somewhat extreme issues, but it was more the personal nature, making of fun of different groups. I was surprised he did that so voraciously.”

FOX 5 attempted to reach Gray throughout the day Tuesday, but got no response. According to the Washington Post, Gray said some of his tweets were “completely inappropriate.”

Gray and Wheeler are running for the seat vacated by Republican Corey Stewart who held it for 15 years before leaving the post after a failed run for senate and governor. Election day is just six weeks out.