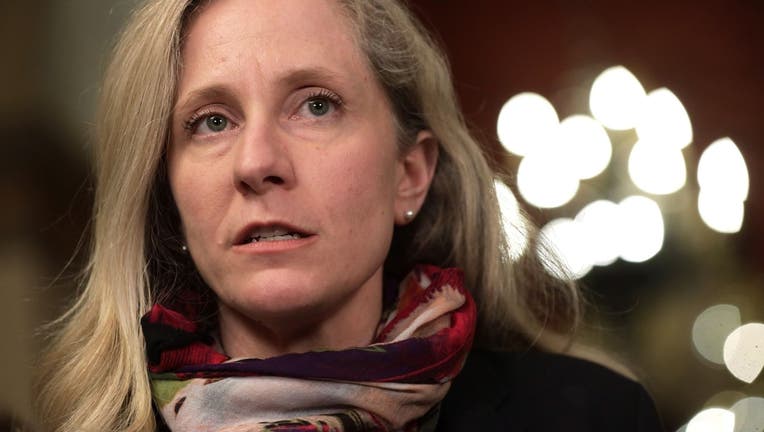 U.S. Rep. Abigail Spanberger (D-VA) speaks to members of the media at the U.S. Capitol March 13, 2020 in Washington, DC. Speaker of the House Rep. Nancy Pelosi held a briefing on the Coronavirus Aid Package Bill that will deal with the outbreak of CO

The former CIA operations officer defeated Republican challenger and state House delegate Nick Freitas in a close race that was called on Sunday.

Spanberger is considered one of Congress' more moderate Democrats and was part of a wave of women who helped Democrats retake the U.S. House in 2018. But Freitas had tried to tie Spanberger to her party's leadership and said that it was out of sync with constituents.

Spanberger spent nearly a decade with the CIA, working on counterterrorism and nuclear proliferation cases. She is one of two moderate Virginia Democrats who held on to U.S. House seats they flipped from red to blue two years ago, as Democrats' strength in the Old Dominion continues to grow.

The 7th District stretches from the suburbs west of Richmond to the exurbs of Washington to rural towns at the base of the Blue Ridge Mountains. It supported President Donald Trump's first presidential bid.

Trump won the area by 8 percentage points in 2016. And former Republican Congressman Dave Brat had won the 7th that same year with a 15 percentage-point reelection victory.

Spanberger defeated Brat by nearly 2 percentage points in 2018. And she has established herself as a moderate in her party who's worked across the aisle to craft bipartisan bills.

U.S. Rep. Elaine Luria, a Democrat, also held on to her seat in a Hampton Roads-area congressional district that includes suburban and rural areas and the world's largest naval base.

Luria is a U.S. Navy commander. She and Spanberger were part of a group of moderate Democratic, first-term congresswomen with deep military and intelligence experience. Their credentials were instrumental in pushing the Democrat-led House to prosecute Trump over allegations that he pressured Ukraine to investigate Democratic rival Joe Biden.

Spanberger's victory, though with smaller margins than some Democrats hoped, comes as House Democrats cast blame Thursday on their election message, ground game and Pelosi's leadership.

Spanberger was one of several lawmakers who unloaded during a marathon caucus call Thursday.

During the campaign, Freitas warned voters that Spanberger was part of a political party that is swinging far to the left of this traditionally Republican district.

He said the coronavirus pandemic and healthcare were major issues in the race. But he said Democrats' "government takeovers" and "economics shutdowns" were the wrong approaches to address them.

While Virginia was considered a swing state as recently as 2012, it has trended sharply toward Democrats over the past decade. Republicans have not won statewide in Virginia since 2009.

Democrats lost a race in the 5th Congressional District, where they hoped internal GOP divisions would help them win. But the race was always a bit of a reach in a Republican-friendly district.