Prince William County Police have released video of suspects believed to be involved in the Georgetown Village shooting in July.

PRINCE WILLIAM COUNTY, Va. (FOX 5 DC) - Prince William County Police have released video of suspects before and after a shooting in Georgetown Village in July, seeking help identifying them.

Officers responded to the 16600 block of Georgetown Road in Woodbridge on July 20 around 6:42 p.m. to investigate a shooting. 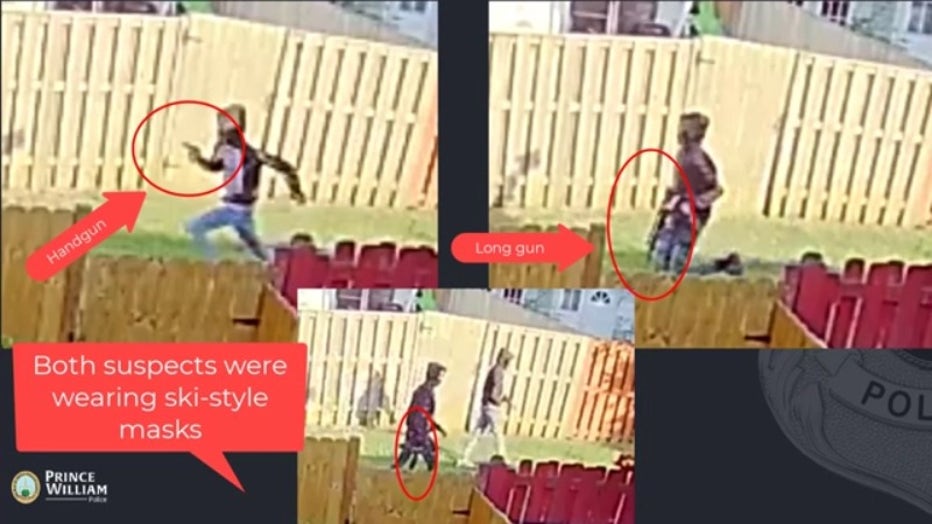 When officers arrived on scene, they located a 21-year-old man on the sidewalk suffering from gunshot wounds. The man was transported to an area hospital where he later died as a result of his injuries. He has been identified as Brian Darnell Marshall of Woodbridge.

A 26-year-old man was also located at the scene with a gunshot wound to his hand. The man was also transported to an area hospital where the injury was determined to be non-life threatening.

The preliminary investigation revealed the two men, and a third man, were standing outside on the sidewalk when two unknown men appeared from a nearby alley.

The unknown men immediately began shooting toward the three men before fleeing on foot. Multiple vehicles were also struck during the encounter. No other injuries were reported.

The men were only described as black males, wearing all dark-colored clothing.

Police are releasing video showing the suspects before and after the shooting. A reward of up to $5,000 is also being offered for the arrest and conviction of the suspects involved.