Videos and photos circulating on social media show a maskless D.C. Mayor Muriel Bowser officiating a large wedding in the District on Saturday despite a newly reinstated indoor mask mandate in the nation's capital.

WASHINGTON - Videos and photos circulating on social media show a maskless D.C. Mayor Muriel Bowser officiating a large wedding in the District on Saturday despite a newly reinstated indoor mask mandate in the nation's capital.

Social media posts show many people attending the wedding Saturday at The LINE DC, a 5-star hotel in Adams Morgan.

Bowser officiated the wedding on the hotel's rooftop before drinks and dancing that later headed inside.

DC Mayor Muriel Bowser was seen officiating a large wedding in the nation's capital without a mask despite the new mandate.

Bowser officiated the event less than 24 hours after being photographed maskless with comedian Dave Chappelle on Friday night at The Anthem, where Chappelle performed a comedy set. That celebration occurred a few days before Bowser's birthday on Monday.

Bowser reinstated an indoor mask mandate in D.C., regardless of vaccination status, following the alarming surge in new COVID-19 infections driven by the Delta variant. 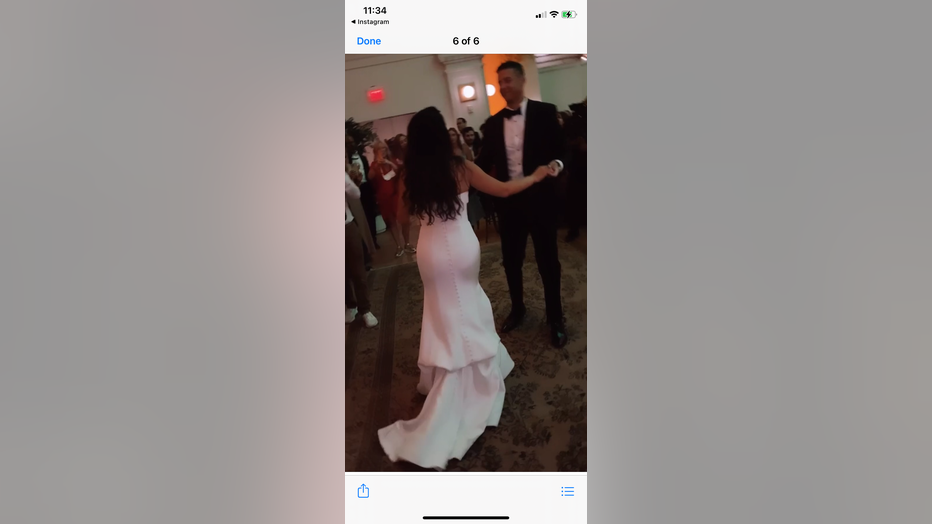 This photo shows the wedding celebration headed inside, with many guests not wearing masks despite the new indoor mask mandate. (Instagram)

DC Health's Dr. LaQuandra Nesbitt says the daily case rate has gone up five-fold since the beginning of July, and The District currently has a "substantial" rate of transmission as the variant  spreads across the country.

"Given the trends in cases that we see, we want to get ahead of it, nip it in the bud," Bowser said Thursday. "We know masks can be very effective in doing that."

Bowser's office sent FOX 5 this statement that says in part:

"On Saturday, July 31st, Mayor Bowser officiated an outdoor, rooftop wedding ceremony, followed by an indoor dinner. The Mayor wore a mask indoors in compliance with the mandate, and the organizers and venue staff worked to create a safe environment for the staff and guests. The Friday, July 30th evening event called into question by conservative media was outdoors, on a rooftop."

Videos and photos circulating on social media show a maskless D.C. Mayor Muriel Bowser officiating a large wedding in the District on Saturday despite a newly reinstated indoor mask mandate in the nation's capital.

"We continue to emphasize everyone should be vaccinated as soon as possible and to wear a mask at indoor public settings to protect yourself, your loved ones and your neighbors," the statement reads.

The statement did not address a published photo of a maskless Mayor Bowser inside during the wedding dinner, and not eating or drinking.

Sophie Penichet, general manager at The LINE, said in a statement that the hotel does not comment on guests at private events.

"The safety of our team, guests and wider community is our utmost priority. The Line Hotel is adhering to the updated mask mandate and requires all employees and guests to be masked when indoors, or not actively eating or drinking," Penichet tells FOX 5.

"If you are in office and you’re advocating for a certain policy, it’s important and just to be aware that people are going to be following you to see, you know, see whether you’re abiding by that policy too," said Johns Hopkins Epidemiologist David Dowdy.

FOX 5 asked Dowdy about the mayor’s wedding appearance -- and other images like the Friday celebration with Dave Chappelle, which her office defended the outdoor, rooftop event. There’s also the November photo of Mayor Bowser celebrating President Biden’s win in Delaware --  a state on her travel restriction list at the time. That was excused by her office as "essential travel" for government work.

The D.C. mayor is not the only one with controversy-sparking posts during the pandemic. Still,  responding to questions about Mayor Bowser, Dr. Dowdy eluded to the point that some of these images of elected officials have the potential to undermine messaging, which he believes is the biggest protection against Coronavirus.

"The point of a mandate is to create that structure where everyone is going to have their mask on. Then when people walk into a room, not only will they feel like I need to put my mask on as well, but this is something I need to be taking a little seriously in the rest of my life. So if I’m planning that party of 100 people who are going to come over. Maybe I’m going to think twice," added Dowdy.

FOX 5 reached out to ABRA to inquire whether any complaints were made/investigations were launched into the Saturday event. The ABRA Director directed us to the Mayor’s office on the matter. The Mayor’s office confirmed for FOX 5 that as of around 2:35 p.m. Monday, ABRA had not received any complaints. We’re told they would most likely issue a warning if so.