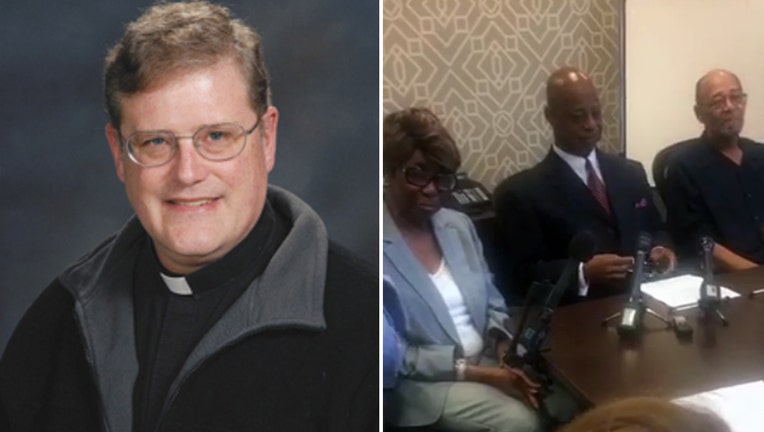 WASHINGTON - A Catholic priest in Fairfax who revealed he was once a Ku Klux Klan member who committed hate crimes hasn't done enough to repay for his evil deeds, according to his victims.

WATCH LIVE: The latest on Fr. Aitcheson on FOX 5 at 5

Fr. William Aitcheson of the Catholic Dioceses of Arlington recently penned an editorial in the Arlington Catholic Herald in which he disclosed his past life as a member of the hate group and asked for forgiveness.

Aitcheson said the recent events in Charlottesville, Virginia, moved him to disclose his past life publicly and encouraged white supremacists to, "find peace and mercy in the only place where it is authentic and unending: Jesus Christ." The Dioceses said Aitcheson voluntarily asked to take a leave of absence for the well-being of the church and parish community.

FOX 5 uncovered FBI documents that show Aitcheson threatened to kill the widow of civil rights leader Martin Luther King, Jr. if she spoke at an event in Maryland. Aitcheson was also convicted of burning a cross in the yard of an African American couple in College Park, Maryland, and spent 90 days in jail.

The couple, Barbara and Phillip Butler, said Aitcheson never reached out to them to apologize for his crimes and never acknowledged them during court proceedings.

The Butlers said the cross was burned in their front yard in January of 1977. The cross burning on the Butler's property later caught the attention of President Ronald Reagan, who personally visited the Butlers to reassure them of his support and the support of the nation.

The Butlers said they were awarded $23,000 in a 1982 civil case against Aitcheson, but stated he never paid them.

"We are coordinating with Father Aitcheson in his efforts to seek reconciliation and make restitution," the Diocese of Arlington said in part of a written statement to FOX 5. "Father Aitcheson fully understands this is his obligation and that he must do what is possible to make this situation right."

The Diocese of Arlington said Aitcheson wished to meet with the Butlers in private in hopes that it would "bring them healing." The Butlers said at this time they were not interested in meeting with Aitcheson because they were not sure of his true intentions. The family's attorney said an unnamed source told him that Aitcheson was going to be exposed for his past and that's why the priest wrote the editorial.

During a Wednesday afternoon press conference, the Butlers said if Aitcheson was truly seeking forgiveness he would out the members of the KKK he served with.

"We didn't deserve this," Barbara Butler said. "Nobody deserves this."

According to the Butlers, the cross that was burnt in their yard was too large for one person to carry alone and would've required multiple people to lift and assemble. The Butlers called on Aitcheson to publicly name the people who they said were never brought to justice for helping him burn the cross.