LOS ANGELES - The U.S. recorded more than 144,000 coronavirus cases Tuesday, setting another single-day record for virus cases since the pandemic first began, according to data from Johns Hopkins University.

Well over 100,000 new confirmed coronavirus cases have been reported daily in the U.S. for more than a week.

There have been more than 242,000 deaths recorded and over 10.5 million confirmed cases, according to Johns Hopkins.

Earlier this week, Pfizer Inc. said that its COVID-19 vaccine may be 90% effective, based on early and incomplete test results. But Dr. Anthony Fauci, the nation’s leading expert on infectious diseases, warned that it is highly unlikely that COVID-19 could be fully eradicated, saying that a vaccine won’t necessarily bring a complete end to the pandemic.

“The cavalry is coming, but don’t put your weapons down, you better keep fighting because they are not here yet. Help is on the way, but it isn’t here yet,” Fauci said at a webinar hosted by think tank Catham House.

Meanwhile, many of the nation’s school systems are giving up on in-person classes, and some governors are re-imposing restrictions on bars and restaurants amid the surge in cases and hospitalizations.

New Jersey Gov. Phil Murphy said Thursday he will sign an executive order to give towns and cities the option to limit hours at nonessential businesses after 8 p.m. The mayor of Newark, New Jersey, imposed a 9 p.m. curfew for residents of three hard-hit ZIP codes.

Costco updates mask policy for those with medical conditions

The retail giant is updating its COVID-19 policy to require all customers and employees to wear either a face mask or a face shield, except for children under the age of 2.

Philadelphia dropped plans to start bringing students back to school on Nov. 30. Michigan’s largest school district, Detroit, said it will suspend in-person classes next week for its roughly 50,000 students, joining other districts that have shifted to online-only classes.

Chicago Mayor Lori Lightfoot called on residents to cancel Thanksgiving gatherings, limit all social gatherings to 10 people, and stay home except for essentials, like work or getting groceries, starting on Monday. 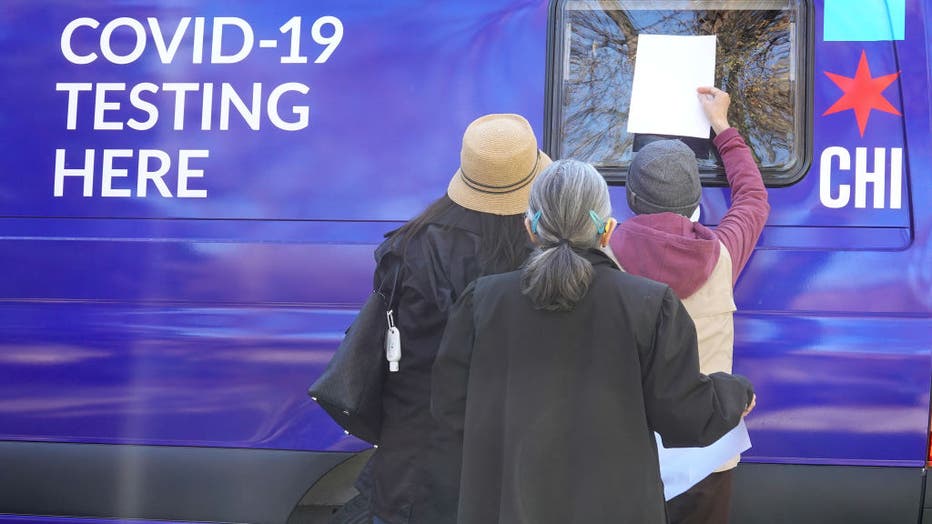 Residents check in for a COVID-19 test at a test site run by CORE at St. Benedict the African Catholic Church in the Englewood neighborhood on November 12, 2020 in Chicago, Illinois. (Photo by Scott Olson/Getty Images)

The ongoing crisis has deepened at hospitals, with the situation so bad in North Dakota that the governor this week said nurses who test positive but have no symptoms can still work. Idaho clinics struggled to handle the deluge of phone calls from patients. And one of Utah's biggest hospital systems is bringing in nearly 200 traveling nurses, some of them from New York City.

RELATED: Nurses with COVID-19 allowed to work in North Dakota amid staffing shortage

Deaths per day in the U.S. have soared more than 40% over the past two weeks, from an average of about 790 to more than 1,100 as of Wednesday, the highest level in three months.

That is still well below the peak of about 2,200 deaths per day in late April, in what may reflect the availability of better treatments and the increased share of cases among young people, who are more likely than older ones to survive a bout with COVID-19.

But newly confirmed cases per day in the U.S. have rocketed more than 70% over the past two weeks, reaching an average of about 127,000 — the highest on record. And the number of people hospitalized with the virus hit an all-time high of more than 65,000.