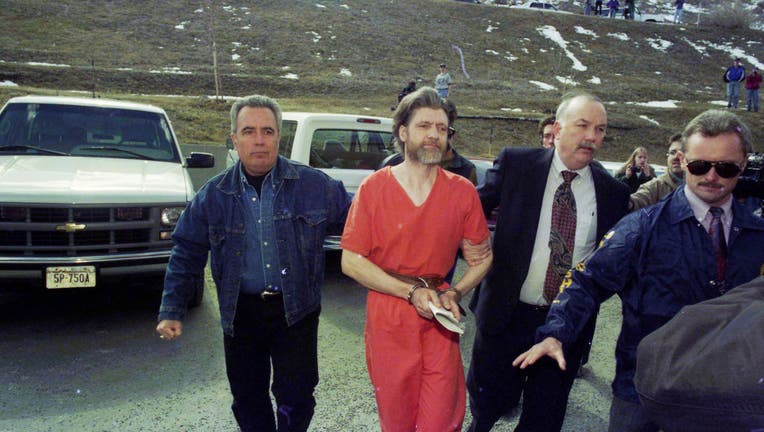 Theodore 'Ted' Kaczynski (in orange) is guided to his arraignment by federal marshals, Helena, Montana, April 4, 1996. He had been arrested in connection with the 'Unabomber' bombings and the deaths those explosions caused. (Michael Macor/The San Fra

The man known as the "Unabomber" has been transferred to a federal prison medical facility in North Carolina after spending the past two decades in a federal Supermax prison in Colorado for a series of bombings targeting scientists.

Theodore Kaczynski, 79, was moved to the U.S. Bureau of Prison’s FMC Butner medical center in eastern North Carolina on Dec. 14, according to bureau spokesperson Donald Murphy. Murphy declined to disclose any details of Kaczynski’s medical condition or the reason for his transfer.

Kaczynski is serving life without the possibility of parole following his 1996 arrest at the primitive cabin where Kaczynski was living in western Montana. He pleaded guilty to setting 16 explosions that killed three people and injured 23 others in various parts of the country between 1978 and 1995.

The Federal Medical Center Butner, in North Carolina’s Granville County just northeast of Durham, offers medical services for prisoners including oncology, surgery, neurodiagnostics and dialysis, according to the Bureau of Prisons. It opened an advanced care unit and a hospice unit in 2010.

FMC Butner has 771 inmates, according to the prison bureau, and has been home to some notable offenders. They include John Hinckley Jr., who was evaluated there after shooting President Ronald Reagan, and Bernard Madoff, the infamous architect of a massive Ponzi scheme who died at the North Carolina facility earlier this year.

The deadly homemade bombs that Kaczynski sent by mail — including an altitude-triggered explosion that went off as planned on an American Airlines flight — changed the way Americans sent packages and boarded airplanes.