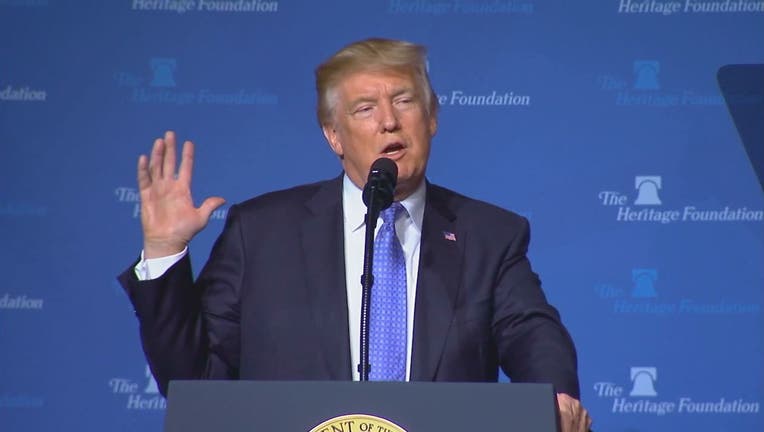 WASHINGTON (AP) -- President Donald Trump took his tax sales pitch to a conservative think tank Tuesday evening, arguing his plan would be a boon to the economy, boosting growth and jobs.

"Let's give our country the best Christmas present of all: massive tax relief," Trump told the annual meeting of the Heritage Foundation's President's Club.

Trump also used his appearance to argue the U.S. should celebrate and preserve its history, "not tear it down." He pointed to a movement to take down Confederate status and other symbols of the country's divisive past, which have sparked protests and backlash.

"Now they're even trying to destroy statues of Christopher Columbus? What's next? It has to be stopped," he said, adding, "You understand that our glorious heritage is the foundation of everything we hope to achieve."

Trump's tax plan would lower the corporate rate from 35 percent to 20 percent, reduce the number of individual income tax brackets and double the standard deduction. But it would also remove the personal exemption and possibly much of the deduction for state and local taxes -- changes that could increase taxes for many families.

As he talked up the plan, Trump repeated his administration's assertion that the corporate tax cut and other changes would lead to a $4,000 pay raise for the average American family -- a claim that has been met with skepticism from tax experts and Democratic lawmakers who say the administration's math is flawed.

Separate studies, including a 2012 Treasury Department analysis, have found that the vast majority of money saved from corporate tax cuts would end up in the hands of investors, not workers.

Trump has been pitching his tax overhaul as a boon for the middle class even though the details point to major companies and the wealthy as the biggest winners.

"The big beneficiaries are the middle class, I call it the working people," Trump told Sirius XM's David Webb in an interview earlier Tuesday.

Trump's remarks came hours after he appeared to endorse a bipartisan plan aimed at stabilizing America's health insurance markets in the wake of his order to terminate subsidies that help insurance companies reduce costs for lower-income people. It's a proposal the think tank made clear it opposes.

Trump said at the dinner he was pleased Democrats had "finally responded to my call for them to take responsibility for their Obamacare disaster" and were working with Republicans "to provide much-needed relief to the American people." But it remained unclear whether he would throw his weight behind the plan.

"While I commend the bipartisan work done by Senators Alexander and Murray -- and I do commend it -- I continue to believe Congress must find a solution to the Obamacare mess instead of providing bailouts to insurance companies," he said.