WASHINGTON - (AP) -- People who were too young on 9/11 to even remember their lost loved ones, and others for whom the grief is still raw, paid tribute with wreath-layings and the solemn roll call of the dead Wednesday as America marked the 18th anniversary of the worst terror attack on U.S. soil.

President Trump and the first lady observe a moment of silence to mark the anniversary of the Sept. 11 terrorist attacks.

"As long as the city will gift us this moment, I will be here," Margie Miller, who lost her husband, Joel, said as she attended the ground zero anniversary ceremony, as she has every year. "I want people to remember."

President Donald Trump laid a wreath at the Pentagon, telling victims' relatives there: "This is your anniversary of personal and permanent loss."

"It's the day that has replayed in your memory a thousand times over. The last kiss. The last phone call. The last time hearing those precious words, `I love you,"' the president said.

Near Shanksville, Pennsylvania, the third site where planes crashed on Sept. 11, 2001, Vice President Mike Pence credited the crew and passengers who fought back against the hijackers with protecting him and others in the U.S. Capitol that day.

"I will always believe that I and many others in our nation's capital were able to go home that day and hug our families because of the courage and selflessness of your families," said Pence, who was an Indiana congressman at the time. Officials concluded the attackers had been aiming the plane toward Washington.

Nearly 3,000 people were killed when terrorist-piloted planes slammed into the World Trade Center, the Pentagon and the field in Pennsylvania.

US Flag Unfurled at Pentagon to Mark 9/11

Just after sunrise the U.S. flag was unfurled at the Pentagon marking 18 years since the 9/11 terror attacks took nearly 3,000 lives across the nation.

For families like Mary Ann Marino's, "18 years has not lessened our loss," she told those gathered at ground zero after she read part of the long list of victims' names. She lost her son, firefighter Kenneth Marino.

Parboti Parbhu choked up as she spoke from the podium about her slain sister, Hardai. Even after nearly two decades, "There's no easy way to say goodbye," she said.

By now, the heritage of grief has been handed down to a new generation, including children and young adults who knew their lost relatives barely or not at all.

Jacob Campbell was 10 months old when his mother, Jill Maurer-Campbell, died on 9/11.

"It's interesting growing up in a generation that doesn't really remember it. I feel a connection that no one I go to school with can really understand," Campbell, a University of Michigan sophomore, said as he attended the ceremony. 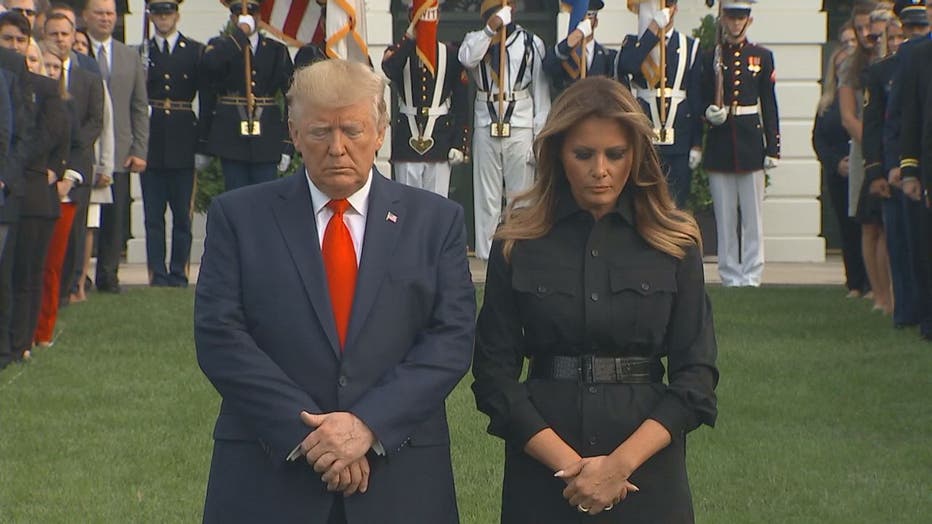 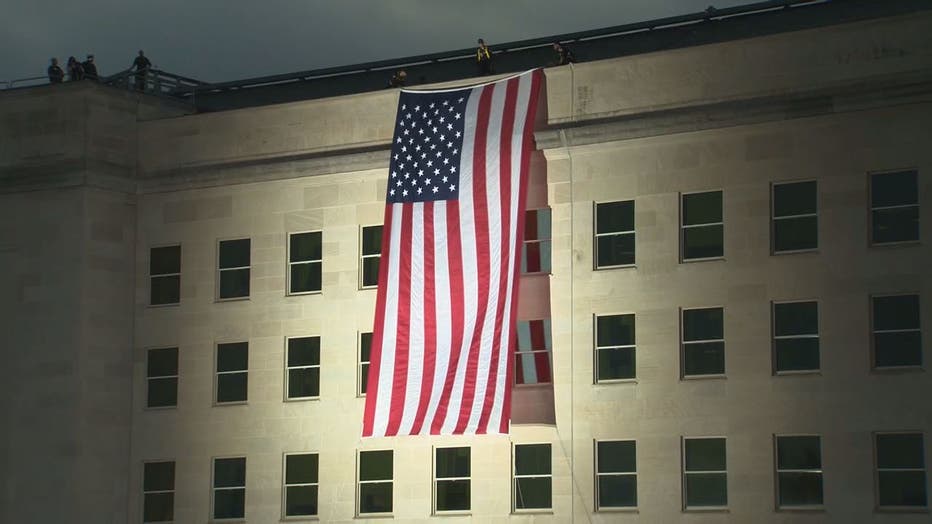 US Flag Unfurled at Pentagon to Mark 9/11

Like the families, the nation is still grappling with the aftermath of Sept. 11. The effects are visible from airport security checkpoints to Afghanistan, where the post-9/11 U.S. invasion has become America's longest war. The aim was to dislodge Afghanistan's then-ruling Taliban militants for harboring al-Qaida leader and 9/11 mastermind Osama bin Laden.

Earlier this week, Trump called off a secret meeting at Camp David with Taliban and Afghan government leaders and declared the peace talks "dead." As the Sept. 11 anniversary began in Afghanistan, a rocket exploded at the U.S. Embassy just after midnight, with no injuries reported.

The politics of 9/11 flowed into the ground zero ceremony, too.

After reading victims' names, Nicholas Haros Jr. used his turn at the podium to tear into Democratic Rep. Ilhan Omar of Minnesota over her recent "Some people did something" reference to 9/11.

"Madam, objectively speaking, we know who and what was done," Haros, who lost his mother, Frances, said as he reminded the audience of the al-Qaida attackers.

"Our constitutional freedoms were attacked, and our nation's founding on Judeo-Christian values was attacked. That's what `some people' did. Got that now?" he said to applause.

Omar, one of the first Muslim women elected to Congress, has said she didn't intend to minimize what happened on Sept. 11, and accused critics of taking her words out of context. She tweeted Wednesday that "September 11th was an attack on all of us."

The dead included Muslims, as Zaheda Rahman underscored after reading names at ground zero. She called her uncle, Abul Chowdhury, a "proud Muslim-American man who lived his life with a carefree nature, a zeal for adventure and a tenacity which I emulate every single day."

Others made a point of spotlighting the suffering of firefighters, police and others who died or fell ill after being exposed to the smoke and dust at ground zero.

A compensation fund for people with potentially Sept. 11-related health problems has paid out more than $5.5 billion so far. More than 51,000 people have applied. Over the summer, Congress made sure the fund won't run dry. The sick also gained new recognition this year at the World Trade Center site, where a memorial glade was dedicated this spring.

Sept. 11 has become known also as a day of service. People around the country volunteer at food banks, schools, home-building projects, park cleanups and other community events around the anniversary.