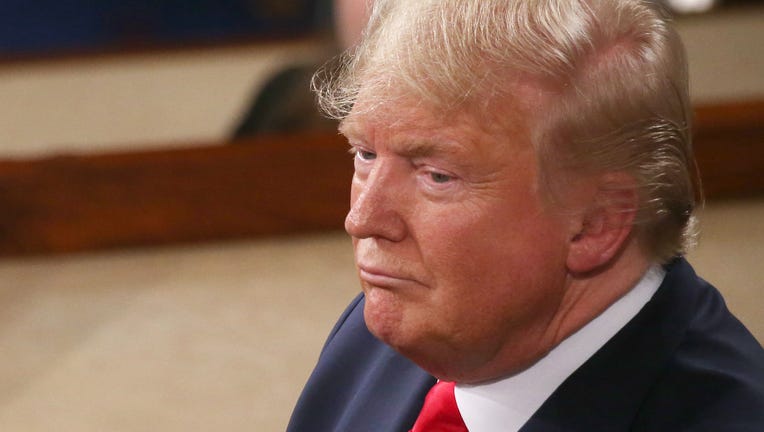 President Donald Trump delivers the State of the Union address in the chamber of the U.S. House of Representatives on Feb. 4, 2020 in Washington, D.C. (Photo by Mario Tama/Getty Images)

The event took place at Trump's Mar-a-Lago club in Palm Beach, Florida, where the nation's 45th president delivered a keynote address that often veered away from an advance release of his speech.

"If that were Schumer instead of this dumb son of a b----, Mitch McConnell, they would never allow it to happen," Trump said of the certification of the 2020 election results at the U.S. Capitol on Jan. 6, according to The Washington Post.

"They would have fought it," Trump said, also referring to the election as "bulls---" at one point.

Trump vowed in the speech he would help Republicans win back the majority in Congress in 2022.

"I stand before you this evening filled with confidence that in 2022, we are going to take back the House and we are going to reclaim the Senate," he said in his prepared remarks, according to Reuters.

Trump didn’t say whether he plans to run for president again but assured donors "in 2024, a Republican candidate is going to win the White House."

He said any potential announcements of his own candidacy would likely come after the 2022 midterms, according to Reuters.

Trump reportedly strayed from his prepared remarks several times during the approximately 50-minute speech, including when he spoke about McConnell.

The former president also said he was "disappointed" that former Vice President Mike Pence had not fought the certification of the election in January.

"I wish that Mike Pence had the courage to send it back to the legislatures," Trump lamented of the 2020 Electoral College results, according to the Post. "I like him so much. I was so disappointed."

Neither Pence nor McConnell were reportedly in attendance.

Condemning the situation at the border, Trump said, "They’re coming in from the Middle East. They’re not sending their best people. You have murderers, you have rapists, you have drug dealers."

Trump also went after Elaine Chao, his former transportation secretary and McConnell’s wife, who resigned after the U.S. Capitol riot on Jan. 6. He claimed after he hired Chao she never said "thank you."

He touted his response to the coronavirus pandemic last year and mocked White House chief medical adviser Dr. Anthony Fauci for first advising against masks at the beginning of the pandemic and he joked that Fauci now wants Americans to wear "five" masks.

"Have you ever seen anybody that is so full of crap?" he asked of Fauci, according to the Post.

Trump even said someone recently suggested the vaccine should be called "Trumpcine" because of Operation Warp Speed, which helped accelerate the development of the vaccines last year.

He praised Govs. Kristi Noem of South Dakota and Ron DeSantis of Florida for reopening their economies while other states remained closed during the pandemic.

Aside from Saturday night's Mar-a-Lago soiree, a majority of the events during the three-day GOP retreat this weekend were held at the Four Seasons Resort in Palm Beach, Politico reported.