Tropical Storm Warnings have been issued across Central and South Florida as Potential Tropical Cyclone One brings heavy rain and gusty winds to the southern half of the state.

When the National Hurricane Center designates a system as a "potential tropical cyclone," it allows forecasters at the NHC to issue advisories, watches and warnings for a disturbance that hasn't yet developed into a tropical depression or tropical storm but is expected to bring tropical-storm-force winds (40-plus mph) to land areas within the next 48 hours.

As of midday Friday, this developing system located more than 400 miles southwest of Fort Myers, Florida, was producing clusters of showers and thunderstorms. Bands of rain and gusty winds had already arrived in parts of South Florida and the Florida Keys as tropical moisture streams well to the northeast of the system's center. 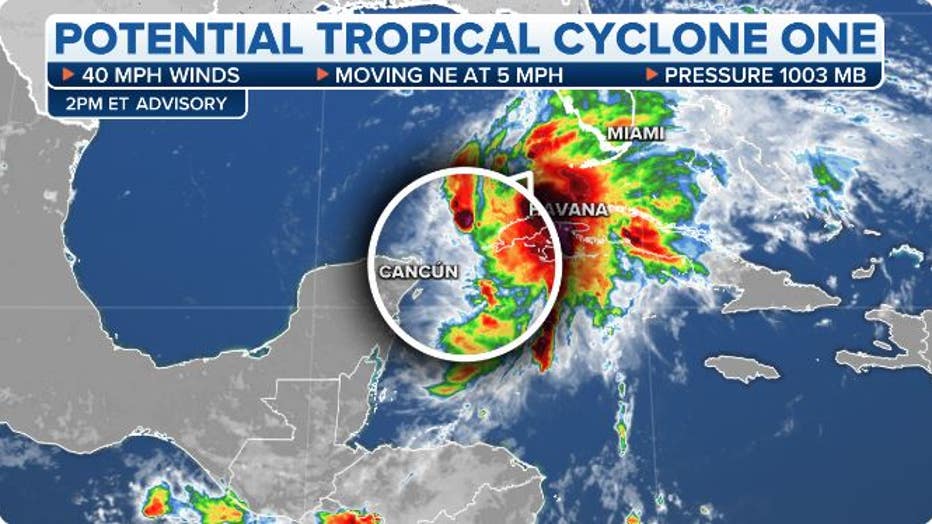 The current stats on Potential Tropical Cyclone One. (FOX Weather)

Tropical Storm Warnings have been extended into much of Central and South Florida and the Florida Keys, including Fort Myers, Key West, Melbourne, Miami, Naples and West Palm Beach. This means tropical-storm-force winds (40-plus mph) are expected in the warning area within 36 hours, or in this case, from Friday night into Saturday. 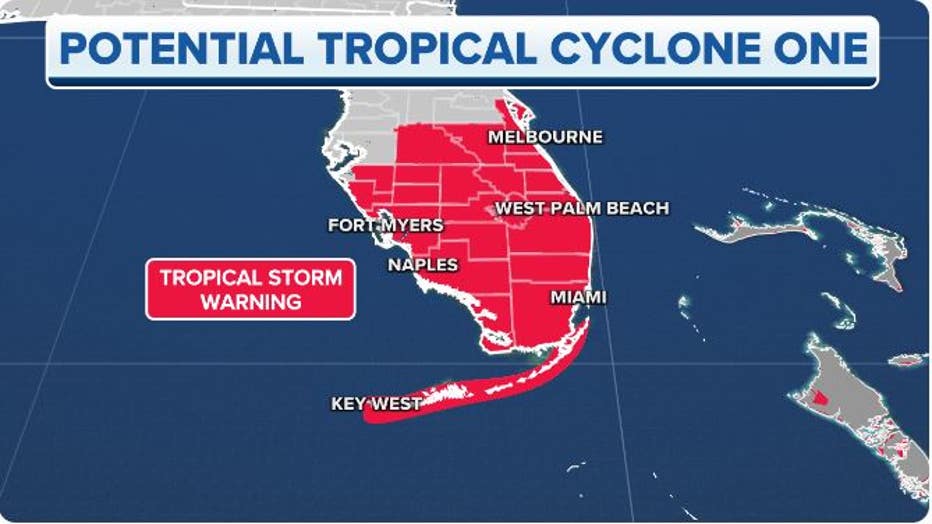 Tropical Storm Warnings are in effect across much of Central and South Florida, the Florida Keys and the northwestern Bahamas.(FOX Weather)

According to the NHC, Potential Tropical Cyclone One is expected to organize and become Tropical Storm Alex as it approaches Florida on Friday and Friday night.

The forecast cone of uncertainty is shown below, but keep in mind that impacts such as heavy rain and gusty winds will also occur to the north and south of the cone. Even though Miami is technically outside the cone, it will see some of the heaviest rainfall associated with this storm.

TIMELINE: Tropical storm warnings issued for parts of Florida ahead of potential 'Alex' 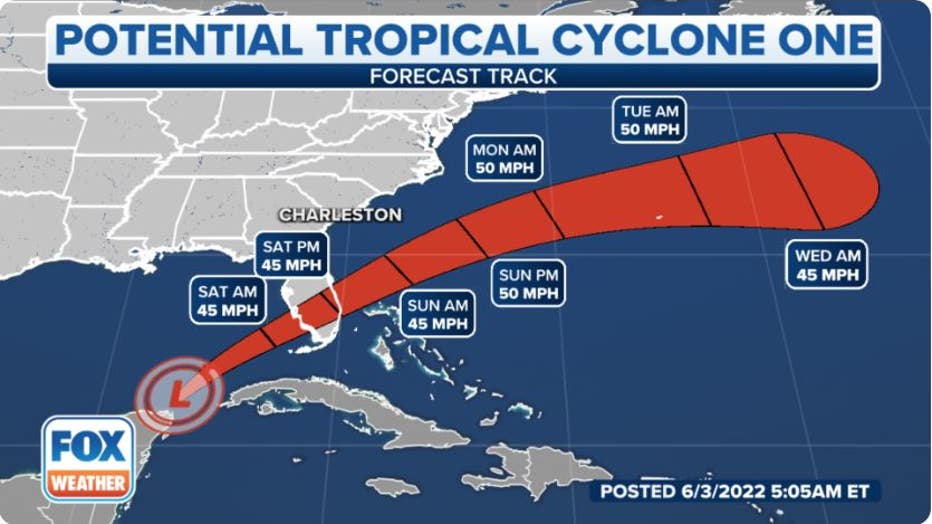 The projected path and intensity of Potential Tropical Cyclone One. (FOX Weather)

The good news is that upper-level winds remain strong over the Gulf of Mexico, making conditions hostile for any significant intensification of the potential tropical cyclone, so the worst-case scenario appears to be a low-end tropical storm strike on Central and South Florida.

"All of the bad weather is being pushed ahead of the developing center of circulation, so this is not a situation where it makes sense to track the center of the storm," said FOX Weather Hurricane Specialist Bryan Norcross. "The strong upper-level winds blowing across the system are responsible for making it so lopsided, and they are forecast to continue, so significant strengthening appears unlikely."

Because of the system's lopsided nature, most of the heavy rain and gusty winds are occurring well to the east and southeast of its center of circulation. That's why the storm's impacts will also occur outside the forecast cone of uncertainty, which only depicts the path of the storm's center. 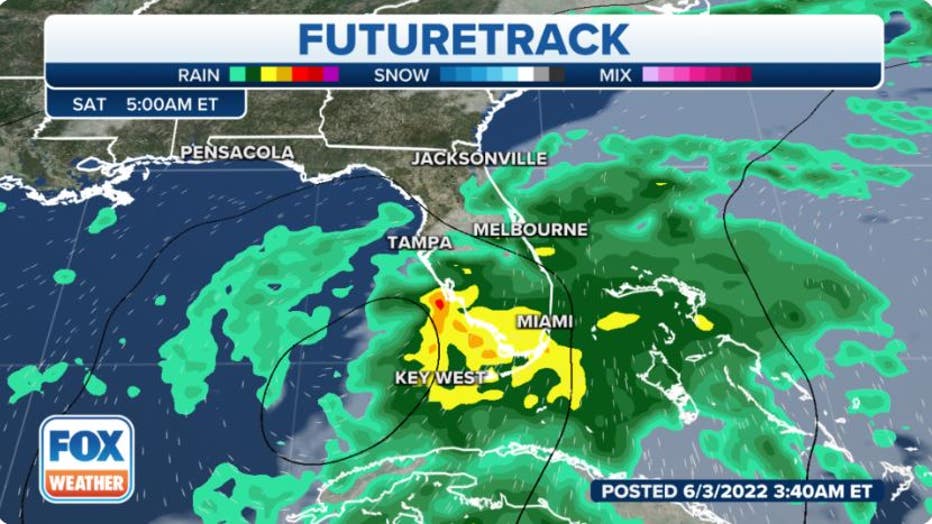 A soaking rain and gusty winds will continue to overspread South Florida while also continuing in western Cuba on Friday. Tropical-storm-force winds (40-plus mph) are expected to arrive in the Tropical Storm Warning areas in Central and South Florida by Friday night.

The NHC says there could also be isolated tornadoes in South Florida beginning Friday evening.

This system will make landfall in southwestern Florida on Saturday morning and then move northeastward across central and southern portions of the Florida Peninsula, bringing heavy rain and gusty winds to those areas. Heavy rainfall could also affect parts of the northwestern Bahamas.

Isolated tornadoes will remain possible in South Florida through Saturday as well.

Late Saturday and into Saturday night, rain and wind impacts in Central and South Florida will begin to diminish as the system exits off the state's east coast and into the southwestern Atlantic north of the northwestern Bahamas.

"The same upper-level winds that are pushing the strong thunderstorms to the front side of Alex’s circulation are also pushing dry air into the back of the system," Norcross said. "As a result, once the front-side rain passes across the Florida Peninsula on Saturday, the weather will significantly improve. Saturday evening and Sunday look good." 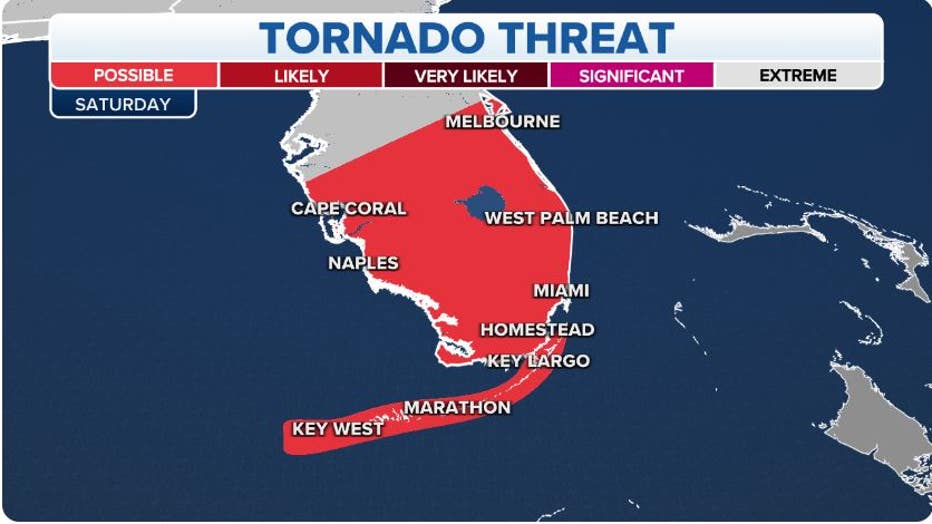 The storm will then track off the southeastern U.S. coast on Sunday. Most of the rain should remain offshore, but gusty winds could spawn high surf and life-threatening rip currents along the Southeast coast.

The storm will track away from the U.S. East Coast and move into the open waters of the western and central Atlantic.

The NHC is predicting that 4 to 8 inches of rain will fall across Central and South Florida and the Florida Keys through Saturday. Localized rainfall amounts up to 12 inches are possible in some areas of South Florida and the Keys. This rain may produce considerable flash and urban flooding.

"The heaviest rain will likely come in bands, so some areas will get significantly more than other areas nearby," Norcross said. "The heavy rainbands will also contain the strongest wind gusts. Driving could be dangerous once the strongest bands move across Florida from late Friday into early Saturday."

Western Cuba could pick up between 6 and 10 inches of rain, with localized amounts up to 14 inches. This could result in life-threatening flash flooding and mudslides.

The northwestern Bahamas are forecast to receive 3 to 6 inches of rain, with isolated amounts up to 10 inches. Flash and urban flooding might also become a concern there.

"The storm will affect the northwestern Bahamas in the same way as Florida, just delayed by 12 hours or so," Norcross said. "The strong upper-level winds should keep Alex from being much stronger by the time it gets there." 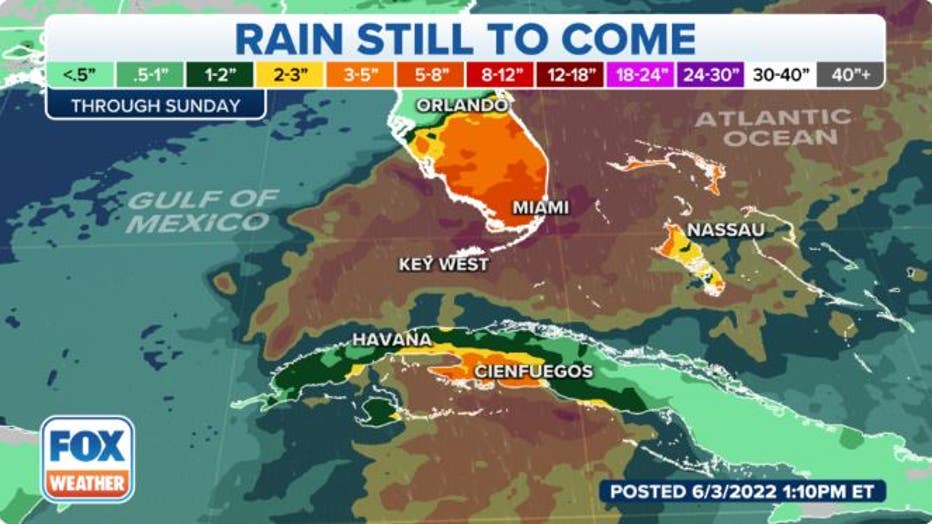 These gusty winds might result in isolated power outages and downed tree limbs.

"The current thinking is that the strongest winds will be coming from the west or southwest when they impact the Miami/Fort Lauderdale metro area," Norcross said. "Once the wind starts blowing, be careful on elevated highways and bridges." 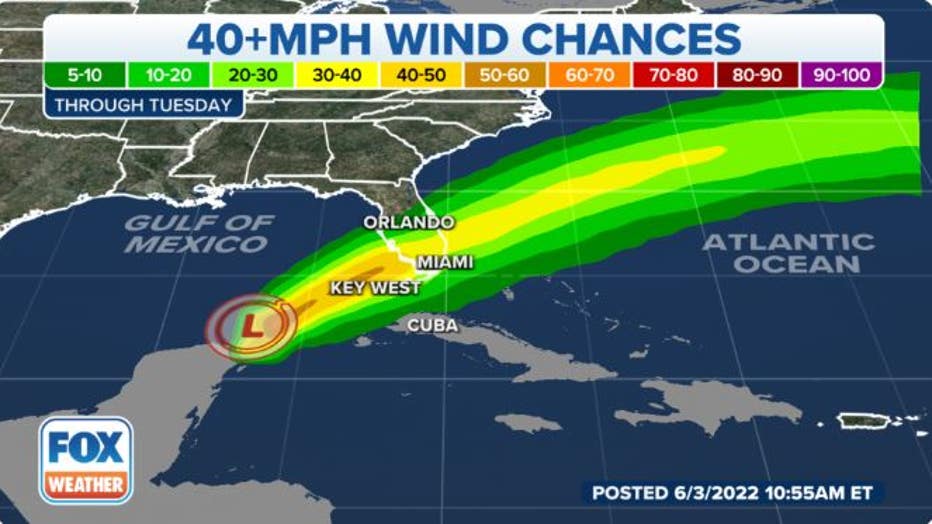 The probability of winds reaching tropical-storm force, or at least 40 mph. (FOX Weather)

The combination of storm surge and the tides will cause normally dry areas near the coast to be flooded by rising waters moving inland from the shoreline. The water could reach the following heights above ground somewhere in the indicated areas if the peak surge occurs at the time of high tide: 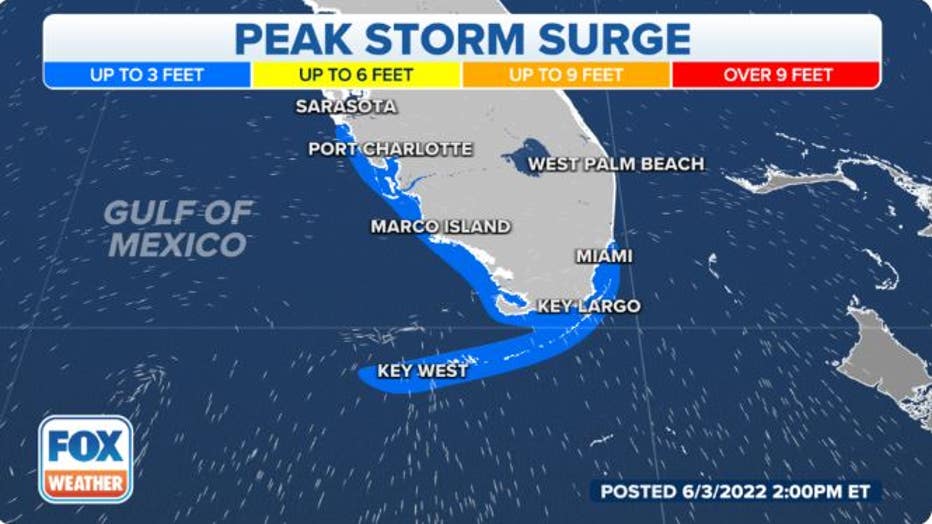