Collierville Police Chief Dale Lane shares an update on a shooting at a Kroger store in Collierville, Tennessee, that left a widowed mother dead and 15 hurt, in a press conference held Sept. 24, 2021.

COLLIERVILLE, Tenn. - The woman killed in a Kroger grocery store shooting in Tennessee was identified on Friday as a widowed mother of three and an employee at the store, as investigators worked to piece together the attack that left 15 others wounded and sent dozens running for their lives and hiding in freezers and locked offices.

Family members said Olivia King was killed when a gunman entered the Kroger store on Thursday afternoon in Collierville, a suburban community 30 miles east of Memphis, according to FOX 13 Memphis. The suspect wounded 15 other people before he was found dead of an apparent self-inflicted gunshot wound at the store.

King’s son told the news outlet that she was shot in the chest and died from her injuries.

"Our family is devastated by this senseless act of violence," the family said in a statement. "We ask that you pray for the repose of the soul of our mother, Olivia King. We also ask everyone for their prayers for all families and friends affected by the events today, as well as for God’s mercy on the shooter and his family."

The other victims were taken to area hospitals, according to Collierville Police Chief Dale Lane. Ten of the victims were employees and five were customers, he said.

"We found people hiding in freezers, in locked offices. They were doing what they had been trained to do: run, hide, fight," the chief said.

Lane called the shooting "the most horrific event that has ever occurred" in the town’s history.

"I've been involved in this for 34 years and I’ve never seen anything like it," he said. 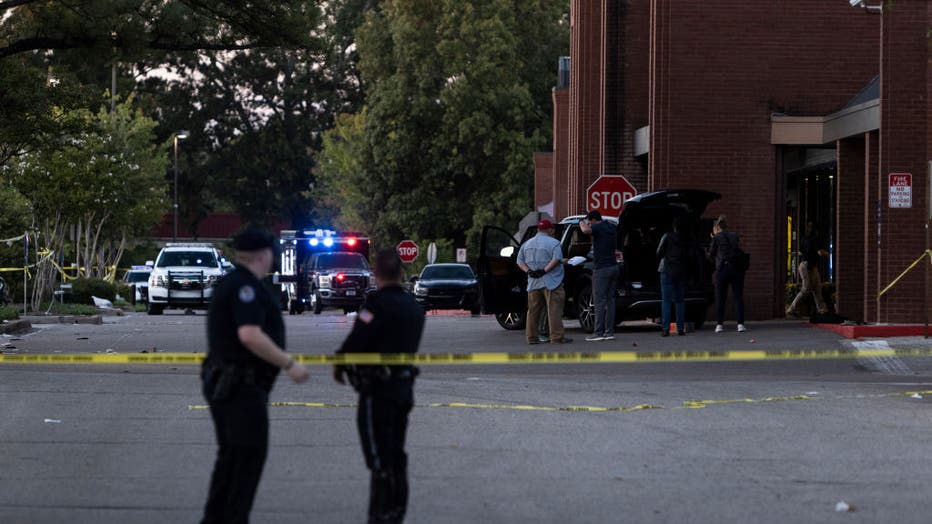 COLLIERVILLE, TN - SEPTEMBER 23: Crime scene tape is seen outside of a Kroger grocery store where a shooting occurred on Sept. 23, 2021, in Collierville, Tennessee. (Photo by Brad Vest/Getty Images)

Police received a call about 1:30 p.m. Thursday about the shooting and arrived almost immediately, finding multiple people with gunshot wounds upon entering the building. Lane said a police SWAT team and other officers went aisle to aisle plucking panicked people from hiding and taking them out safely.

Kroger worker Brignetta Dickerson told the local news outlet that she was working a cash register when she heard what at first she thought were balloons popping.

Dickerson said her co-worker, who is in his 20s, was shot in the head and asked for his mother to be notified.

"I left her a voicemail that he was alert and talking," Dickerson said, unable to immediately reach her.

Lane said the shooter, whom he described as a male, third-party vendor for Kroger, was found dead of an apparent self-inflicted gunshot wound.

The suspect’s vehicle was in the store’s parking lot and remained part of the investigation, Lane said, adding investigators were trying to determine how events unfolded.

Thirteen people were shot and one victim was killed after a suspect opened fire in a Kroger supermarket in Collierville, Tennessee, according to law enforcement.

Collierville is a growing suburb of more than 51,000 people with a median household income of about $114,000, according to U.S. census figures. Set in a rural and historic area, the town square has largely become known for its boutiques and bed and breakfasts.

The Kroger Co., based in Cincinnati, Ohio, issued a statement that it was "deeply saddened" by the shooting and was cooperating with law enforcement. The company in 2019 asked its customers not to openly carry guns while visiting its stores.

"The entire Kroger family offers our thoughts, prayers and support to the individuals and families of the victims during this difficult time. We are cooperating with local law enforcement, who have secured the store and parking lot. The store will remain closed while the police investigation continues, and we have initiated counseling services for our associates," a statement reads in part.