WALNUT CREEK, Calif. - Some teachers are coming up with innovative assignments. Some are working longer. Others are frustrated with technology, trying to figure out Zoom conferencing to teach children as young as six.

And at Parkmead Elementary School in Walnut Creek, Calif., some educators are hosting dance parties online.

Mrs. Renee Weyand and husband Dick "Mr. D." Weyand - the custodial supervisor for the district - are trying to impart a little fun during the statewide stay-at-home quarantine, one where California  Gov. Gavin Newsom said this week that it's very unlikely the state's six million students will be returning to school because of the coronavius outbreak.

The couple stood in their living room, microphones in hand, showing off their dance moves to Rachel Patten's "Fight Song."

A Walnut Creek first grader dances to his favorite teachers during quarantine.

Renee Weyand said she made the video for her 24 students to keep connected while also trying to slow down the spread of the deadly disease. She also wanted to make sure the kids were staying active in quarantine.

Julie Bertenthal Trost shared video of her son, Jonah, 7, having a good time as the Weyands entertained him.

Other teachers were having a harder time.

Rosy Mendoza, a teacher at Escuela Bilingue Internacional in Oakland, said she's working even more now, trying to figure out how to engage her first graders without being there in person.

"Yesterday, I didn't even take a break for lunch," she said.

So far, she created Power Point presentations on maps and math: She's having the children draw their homes and measure their rooms, and then turn their assignments in by email or through a special platform.

"It's been a challenge for them," she said.

Lessons have also been tough for Mendoza.

"I've never been on Zoom in my life," she said. She eventually figured it out and was able to hold a morning circle time with 19 of 23 of her students.

"I think it will be better when we start figuring this out," Mendoza said.

But what Mendoza won't get during the stay-at-home order is the one-on-one interaction: "I miss seeing their faces. The emotional contact. I miss hugging them."

Seeing them on video though, totally helped.

"When I saw their faces, that was all I needed," she said. 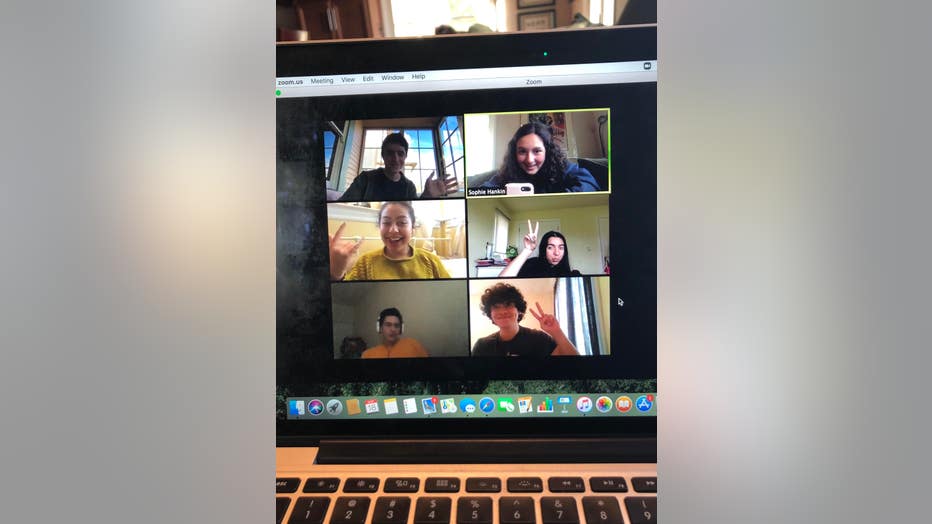 But not all students have access to technology and video.

Stephen Wright, a computer science teacher at Oakland Technical High School, said he's only been able to connect to about half his students.

"And it's purely based on economic lines," he said, noting that many Oakland students don't have the money for computers at home. "They're in the wind. And I'm a little nervous about what their life is like right now."

Wright said the main reason teachers aren't assigning rigorous homework right now is because of this equity issue: "We can't assign new assignments because they might not even get to all the students. Let alone, will they have the support to get through the assignments successfully?"

For the parents who complain, "they're not working my kids hard enough," Wright responded: Feel free to make them work harder on your own.

For now, Wright's online Google chats are purely inspirational: One senior created a Minecraft game that everyone is playing together.

Educational trials and tribulations were playing out similarly across the country, where cities and states are also starting to forbid any non-essential workers from going outside.

An NPR story detailed some of the tales of teachers from New York state to Arkansas.

"Everyone's freaked out,"  Sean Michael Morris at the School of Education and Human Development at the University of Colorado, Denver told the radio station. He and his colleagues have a tongue-in-cheek name for what they're doing right now: "Panic-gogy" (for panic + pedagogy).

Ari Stonehill of Newton, Mass., implored his friends to give teachers a break.

"I am stunned to see posts in my community, in certain groups, people literally complaining that the school superintendent and teachers are not prepared to teach their kids virtually," he wrote on Facebook. "It’s been days since schools announced closures and hours since the MA governor shut all schools down for three weeks!  Yet some parents are complaining the teachers aren’t ready to teach their kids on-line."

Stonehill said his wife is a high school English teacher and some parents had some "unfair knee jerk responses."

He understands on some level.

"I know that everyone was panicking a bit," he said. "But really, their focus and concerns have been out of place relative to the big picture."

Teachers dance, struggle with tech and assignments during quarantine