Kelly Holstine, who won Minnesota's 2019 "Teacher of the Year" award, knelt in protest while being honored along with other teachers at the Mercedes-Benz Superdome in New Orleans.

Among those standing were President Donald Trump and first lady Melania Trump. 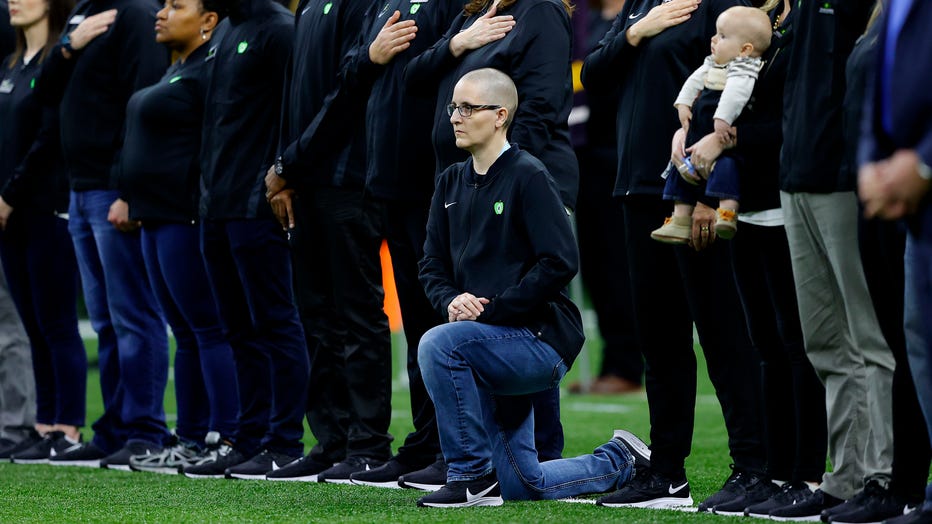 A teacher from the Extra Yard for Teachers charity kneels during the National Anthem prior to the Clemson vs. LSU game in the College Football Playoff National Championship game at Mercedes Benz Superdome on Jan. 13, 2020 in New Orleans, Louisiana. (

"I just decided that it felt like the right thing to do, to have a very respectful protest," Holstine told The Hill on Wednesday.

Holstine said she was motivated to kneel during the anthem for communities that are supposedly oppressed under the Trump administration.

"I think the current environment that is being created and has been created in his tenure definitely adds to my feelings of wanting to support individuals who are not being supported," she said, adding: "I really feel like our country is not serving the needs of all its inhabitants ... so many humans right now that are not being given the respect and the rights that they deserve."

In a tweet recounting the event, Holstine quoted Rev. Martin Luther King Jr., writing: "No one is free until we are all free."

Holstine said she had consulted with other teachers beforehand and decided that it was not enough to simply not place her hand on her heart during the National Anthem.

She said that others who realized what she was doing were "very supportive."

"Not everybody is given the opportunity to have a voice, and I can take a small moment, a respectful moment of protest, and exercise my First Amendment rights, and stand up for my students and for vulnerable adults and for people who are not treated in the way that they should be," she said. "It feels like my responsibility to do that.“

Holstine was an English teacher at a Shakopee alternative high school when she was named Minnesota's Teacher of the Year for 2018-19. She is no longer a public school teacher.

Last year, she and another award-winning teacher, Jessica Duenas of Kentucky, skipped a White House ceremony for the national teacher of the year to protest the Trump administration's education policies.

Get updates to this story on FOXNews com.