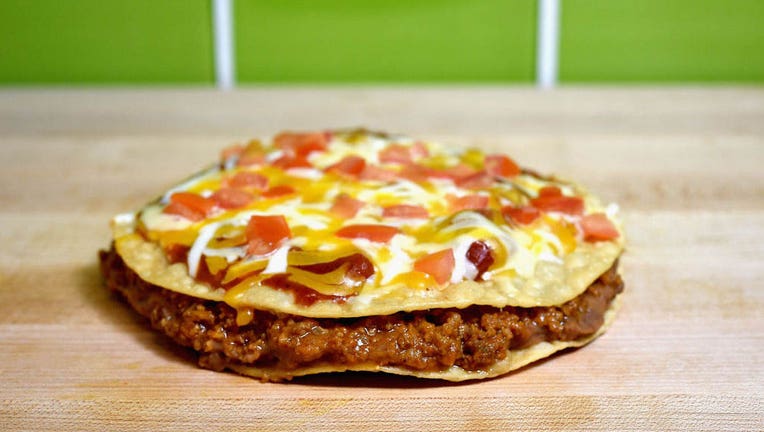 IRVINE, Calif. - It’s official: Taco Bell is bringing back its beloved Mexican Pizza after a social media outcry from fans.

Taco Bell eliminated the beloved menu item, along with four other foods, in November 2020 in an effort to create a faster and "more seamless" restaurant menu and experience. But the restaurant chain announced on Monday that the Mexican Pizza will officially return nationwide on May 19.

The Mexican Pizza is made up of two crispy flour shells, layered with beans, pizza sauce, seasoned beef, tomatoes and a melted three-cheese blend for $4.49. There is also a vegetarian version without the seasoned beef.

After the menu item was cut, petitions and social media campaigns began swirling among Taco Bell fans to bring it back. Grammy Award-winning rapper Doja Cat even made a plea on TikTok.

"Hi, I made a song about Mexican Pizza because I love it so much," Doja Cat explained in the opening of the video. "I wish that Taco Bell didn't discontinue it a year ago."

She goes on to sing a specially-written song, with lyrics like: "I got beans, I need meat, I need a shell with the sauce and the cheese."

But Doja Cat wasn’t the only fan who played a role in bringing back the Mexican Pizza, according to Taco Bell. Superfan Krish Jagirdar led a Change.Org petition begging for its return, which was signed by hundreds of thousands of customers.

"Like many Indian-Americans who grew up vegetarian, we had limited access to the 'fun' fast food, so Taco Bell became a bridge to belonging in American culture for many kids like me who grew up in immigrant households," Jagirdar said of the popular menu item. "That's what made it especially devastating when the Mexican Pizza was pulled from menus in 2020."

Thanks to the success of his online petition, Jagirdar found himself on a conference call with the Taco Bell team as they shared news of the return of the Mexican Pizza, "showing that listening to their fans is clearly embedded in their DNA."

Taco Bell said rewards members who received a "mystery reward" during the Super Bowl LVI will score a free Mexican Pizza on May 19. Also, loyalty members will get first dibs with early access to the menu item beginning on May 17.

"Our menu is full of fan favorites, but the Mexican Pizza is at the top of that list," Mark King, CEO of Taco Bell, said in a statement. "From its flashy introduction to menus in 1985 as 'Pizzazz Pizza' to its inspiration behind the creation of infamous jingles, Mexican Pizza has a long history with the brand and I'm glad we could give fans what they crave and bring our classic Mexican Pizza back home where it belongs."