The statues were covered in red paint by vandals. At least five states and Washington, D.C., have done away with Columbus Day celebrations in deference to Native Americans.

A statue in Providence was splashed from head to toe with red paint on Monday, and a sign reading "Stop celebrating genocide" was leaned against the pedestal. The word "genocide" was written in orange paint on the rear of the pedestal.

The statue has been the target of vandals on Columbus Day in the past, including in 2010, 2015 and 2017, according to the Providence Journal.

Police said they were investigating, and a spokeswoman for Mayor Jorge Elorza said the statue would be cleaned on Monday.

In San Francisco, a Columbus statue was similarly covered in red paint on Sunday near Coit Tower, a popular tourist spot. "Kill all colonizers" was written on the base of the statue.

San Francisco police were investigating the graffiti and reviewing surveillance video in the area. 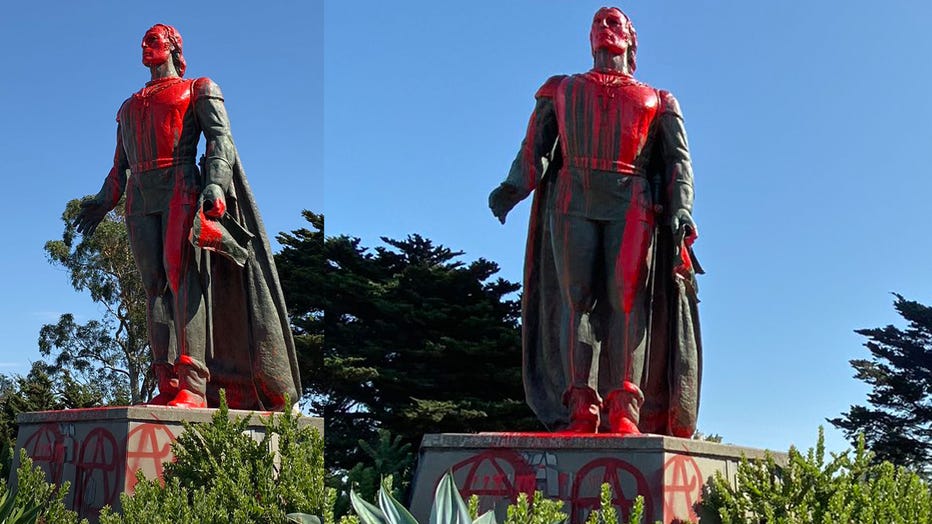 A Columbus statue is seen covered in red paint near Coit Tower in San Francisco on Oct. 13, 2019. (Photo credit: KTVU)

Columbus, an Italian navigator who discovered a sailing route to the “New World” of the Americas in 1492, has become a polarizing figure.

Since 1992, Native American advocates have pressed states to change Columbus Day to Indigenous Peoples Day over concerns that Columbus helped launch centuries of genocide against indigenous populations in the Americas.

From Minnesota to Vermont, at least five states and Washington, D.C., have done away with Columbus Day celebrations in deference to Native Americans, though the federal Columbus Day holiday remains in place.

RELATED: Some US states marking their first Indigenous Peoples' Day