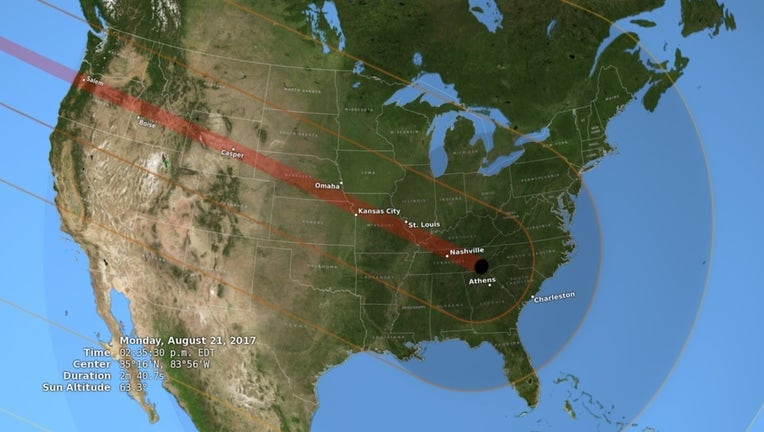 WASHINGTON - In less than one week, one of the most talked about events of the summer will have finally arrived: the much-hyped solar eclipse! The reason the hype is so big for this event is twofold.

While everyone in the lower 48 will be able to see the eclipse to some degree, it will be a very different experience depending on where you live. So what does that mean for us here in Washington, D.C.? Here is everything you need to know:

WHAT IS IT?
A solar eclipse is when the moon passes between the earth and the sun, so that the moon cast a shadow on the earth. To those watching on the ground, the moon appears to cover the sun as it journeys across the mid-afternoon sky.

This is different from the more common lunar eclipses, which is where the earth passes in between the sun and the moon, making the moon appear to turn a shade of red in the night sky. This is an incredible event for those who are lucky enough to witness totality-- where the moon fully covers the sun for a period of time.

Unfortunately, this only covers a narrow band about 70 miles in width, which will not be crossing the D.C. region. Our view here will be entirely different, and sadly not nearly as spectacular as our neighbors to the south, but it will still be a sight to see.

WHO WILL SEE IT?
Weather permitting of course, everyone living on the United States mainland can see the eclipse in some capacity. The most incredible experience will be seen by those in the center of totality zone. Things like "dancing" shadow banding, viewing the sun's atmosphere, and the spectacular 360° "sunset" that accompany the full coverage of the sun are a sight to behold.

If this is the event you want to see, it is about a 7-hour drive to the center of the line of totality, with Columbia, South Carolina being perhaps the closest major city to reach. Here in the D.C. region, coverage of the sun will still be significant when it peaks at 81 percent, but this is not enough to be a jaw-dropping event like those in the south because a good about of sunlight will still be making it past the moon.

During the peak of the event here around our region, you'll notice the skies dim for a few minutes, temperatures may drop by several degrees, and shadows take on a bit of a sharper tone. Unlike those in the totality zone who can look at the sun when it is fully covered with the naked eye, here YOU NEED SPECIAL EYE PROTECTION throughout the entire event if you want to physically see the moon moving in front of the sun. Regular sunglasses ARE NOT sufficient enough to protect your eyes.

These special glasses can be either purchased or obtained free of charge from select locations. You can find more information on where you can get these from reputable sources here.

WHEN WILL IT HAPPEN?
During the afternoon hours of Monday, August 21. The moon's entire crossing of the sun will take several hours, from just after 1 pm until about 4 pm ET, however the window we will want to focus on here in D.C. is from about 2:35 pm until about 2:50 pm. In this region, the coverage of the sun will peak at 81 percent coverage at 2:42 pm.

WHERE CAN I SEE IT?
Anywhere! No, seriously. Because of the summer timing of this event, the sun is still pretty high in the sky during the afternoon. Unlike nighttime lunar eclipses where we recommend getting away from city lights, the light that will cause the most trouble during the event is the sun itself since it will never be fully covered.

RELATED: How to take photos of the solar eclipse with your smartphone

Simply make sure you are somewhere that you can see the sun (with the proper protection of course) and you will see it just as good as anyone else around the region. That being said, we certainly recommend getting away from tress and buildings a bit for a better view, but even close locations downtown like the National Mall, Reflecting Pool, or West Potomac Park should all offer grand views, just to name a few.

If you wish to take in a much closer view of the eclipse, NASA and the Smithsonian institution will be hosting safe telescope viewing of the event at several locations. A telescope will be set up in Pachyderm Plaza at the National Zoo for free viewing, and the National Air and Space Museum will host several events throughout the day as well.

For those wanting to experience the total solar eclipse without the travel, FOX 5's very own Mike Thomas will be heading down to South Carolina, and FOX 5 will stream the entire eclipse live as it travels across the country on our website, YouTube page and Facebook page, beginning at 11:30 am ET.

WHY IS IT A MUST-SEE EVENT?
There is nothing quite like it. Those who witness totality have described it as the most beautiful natural occurrence they have ever seen. It may be one of the most witnessed, photographed, and shared eclipses in history as well, being the first eclipse to traverse the United State mainland in the social media age.

It is true here in D.C. we have drawn a bit of the short end of the stick being outside the zone of totality, which unfortunately is nothing new for the Nation's Capital. The last total solar eclipse in this area was before Columbus even set sail, all the way back in 1478, and the next one won't occur here until 2444.

The partial solar eclipse here will still be spectacular in its own right. After all, it's not every day that the majority of the sun is covered by a giant space rock! However, if you are willing and able to take the journey, it is hard not to recommend traveling to the zone of totality. It will be a totally different and, honestly, more immersive experience than anywhere else.

If you are missing this one and want to plan for the next chance, then mark your calendars for April 8, 2024! This one will be a little closer to our region, with the zone of totality running up through Ohio and extreme northeastern Pennsylvania. Just under 90 percent of the sun will be covered during that event here in D.C., but seven years is a long way away!

WHAT'S THE FORECAST?
Who, what, when, where, and why are the basic "W" questions, but we're adding another for this event because it is so important: weather! It is a fact that this entire, spectacular event can be-- well-- ruined should Mother Nature decide to give us a cloudy day instead of a sunny day. It doesn't even have to be cloudy all day, actually. If clouds show up at the wrong time (specifically between 2:30 pm and 3:00 pm) then we're stuck waiting another seven years for another opportunity to see a similar event.

So, what does it look like? So far, it is looking pretty good! Both the American and European weather forecast models are showing fair conditions up and down the East Coast during the mid-afternoon hours.

It would be nice if we could lock in this weather forecast and coast on through until next week, but unfortunately that is not the way the weather world works. Similar to when we track winter storms or hurricanes, cloud forecasting can change on a day-to-day basis in the weather modeling world. Small differences in where certain weather features are located, or something as simple as a change in wind direction can mean major difference in the amount of clouds we see during the afternoon.

The only thing we can do is recommend that you continue to check back for updates as we get closer to next Monday, and keep your fingers crossed that not much changes.

There you have it! We hope you are as excited about this event as we are here at FOX 5. Remember to get your proper eye protection, and let the countdown begin!

MORE: The 10 coolest places you aren't watching the eclipse from