The Smithsonian’s Board of Regents announced Thursday that it has identified two optimal sites in D.C. for the National Museum of the American Latino and the Smithsonian American Women’s History Museum.

WASHINGTON - The Smithsonian Institution has narrowed its list of potential sites for two new museums near the National Mall in Southwest, D.C., according to a press release.

The Smithsonian’s Board of Regents announced Thursday that it has identified two optimal sites for the National Museum of the American Latino and the Smithsonian American Women’s History Museum.

The first location, called the "South Monument site," will be on the on Jefferson Drive SW on an area of undeveloped land across the National Mall from the Smithsonian’s National Museum of African American History and Culture. While the "Tidal Basin site" will be located on undeveloped land near Raoul Wallenberg Place SW, Maine Avenue SW, and Independence Avenue SW, just west of the United States Holocaust Memorial Museum. 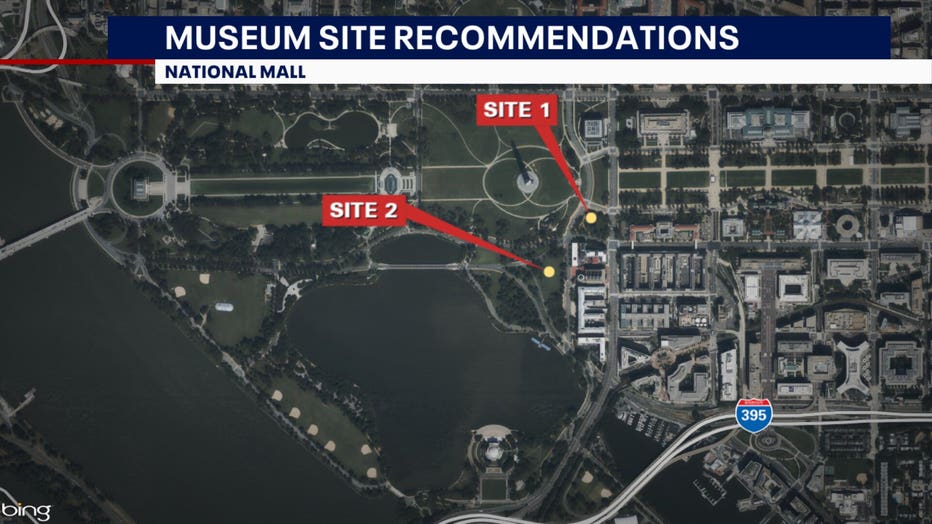 According to the Smithsonian press release, the sites were chosen because they are considered to have "the greatest potential based on site-selection evaluative criteria combined with stakeholder input."

Congressional approval of the sites is required before plans for the museums can be finalized because the sites are on the "reserve," which is a no-build zone. After approval, the Smithsonian's Board of Regents will designate which sites will be use for which museums.

According to Congress, the two museum sites must be designated by the end of 2022.

The Smithsonian's National Air and Space Museum reopens Friday! FOX 5’s Claire Anderson got a preview of what is expected to take curiosity to new heights!

Congress authorized the two new museums in December 2020, and the Smithsonian reviewed more than 25 potential sites before landing on its two optimal choices.

Engineering/architecture firm Ayers Saint Gross of Baltimore helped the Smithsonian with the search.