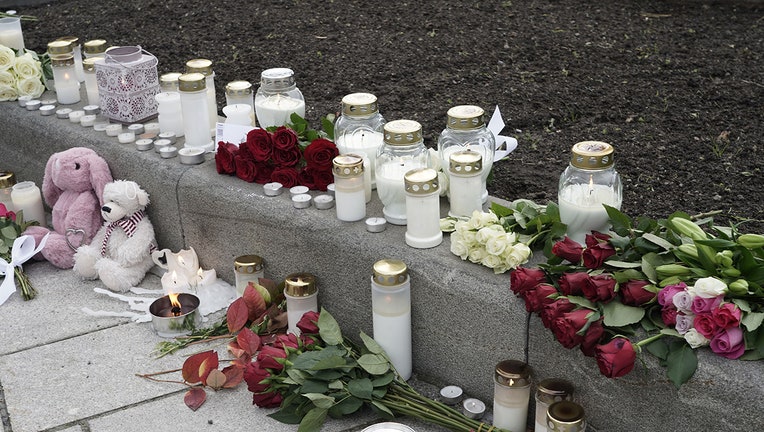 Flowers and candles on display in Kongsberg, Norway, on Oct. 14, 2021, the day after a man armed with a bow and arrows killed five people. (Photo by TERJE PEDERSEN/NTB/AFP via Getty Images)

KONGSBERG, Norway (AP) - Norwegian authorities said Thursday the bow-and-arrow rampage by a man who killed five people in a small town appeared to be a terrorist act, a shocking attack in a Scandinavian country where violent crime is rare.

Police identified the attacker as Espen Andersen Braathen, a 37-year-old Danish citizen, who was arrested Wednesday night. They said he used the bow and arrow and possibly other weapons to randomly target people at a supermarket and other locations in Kongsberg, a town of about 26,000 where he lived, before he was seized by police on the street.

"The whole act appears to be an act of terror," said Hans Sverre Sjoevold, head of Norway's domestic intelligence service, known as the PST.

"We do not know what the motivation of the perpetrator is," Sjoevold said in English. "We have to wait for the outcome of the investigation."

He said the suspect was known earlier by the PST, but he declined to elaborate.

Regional Police Chief Ole B. Saeverud described the man as being known as a Muslim convert and said there "earlier had been worries of the man having been radicalized," but he did not elaborate or say why he was previously flagged or authorities did in response.

Police said four women and one man between the ages of 50 and 70 were killed. Three other people were wounded, police said.

Andersen Braathen is being held on preliminary charges and will face formal charges Friday.

Mass killings are rare in low-crime Norway, and the attack immediately drew comparisons with the country's worst peacetime slaughter a decade ago, when a right-wing domestic extremist killed 77 people with a bomb, a rifle and a pistol. 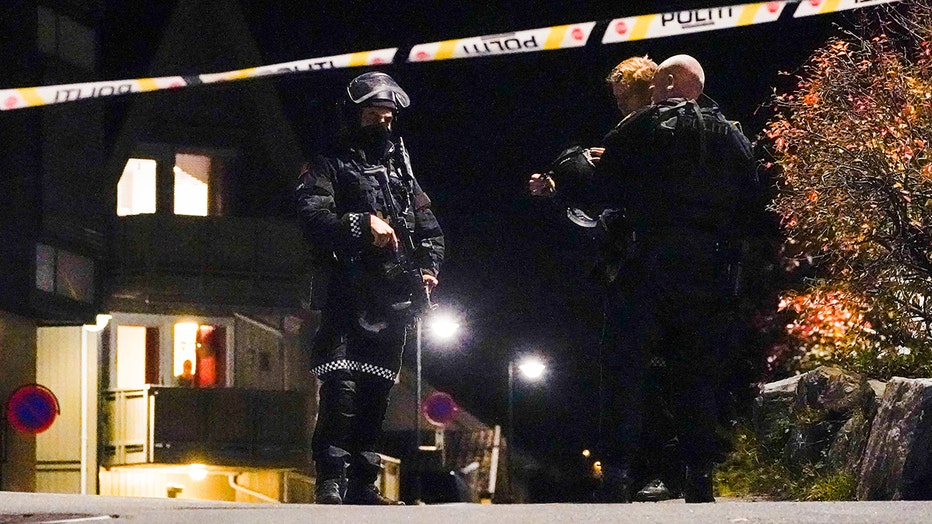 Police officers cordon off the area where a man armed with a bow killed several people in Kongsberg, Norway, Oct. 13, 2021. (Photo by HAKON MOSVOLD LARSEN/NTB/AFP via Getty Images)

People have "experienced that their safe local environment suddenly became a dangerous place," Norwegian King Harald V said Thursday. "It shakes us all when horrible things happen near us, when you least expect it, in the middle of everyday life on the open street."

"This is unreal. But the reality is that five people have been killed, many are injured and many are in shock," Gahr Stoere told Norwegian broadcaster NRK.

Police were alerted to a man shooting arrows about 6:15 p.m. and arrested him about 30 minutes later. Regional prosecutor Ann Iren Svane Mathiassen, told The Associated Press that after the man's arrest, he "clearly described what he had done. He admitted killing the five people."

Dozens of people saw the killings. Erik Benum, who lives on the same road as the supermarket that was attacked, told The Associated Press that he saw shop workers taking shelter in doorways.

"I saw them hiding in the corner. Then I went to see what was happening, and I saw the police moving in with a shield and rifles. It was a very strange sight," Benum said.

On Thursday morning, the whole town was eerily quiet, he said. 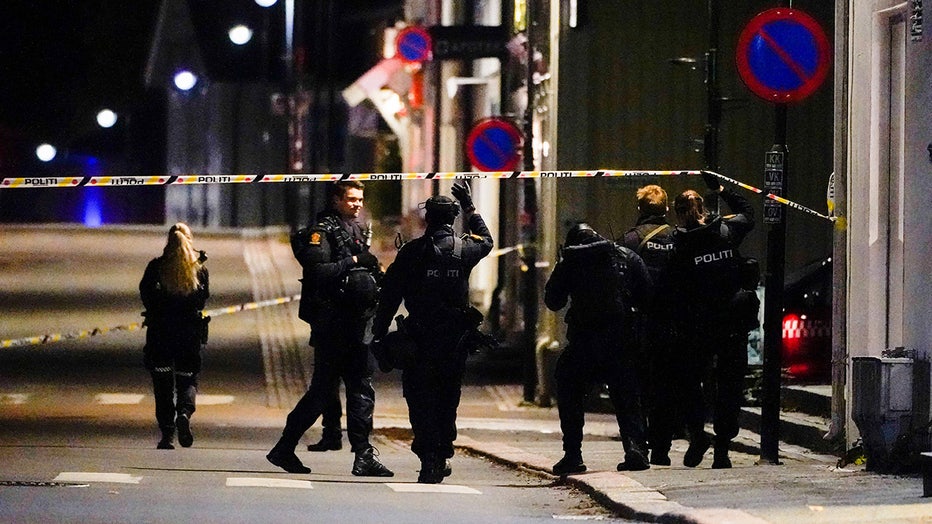 Police officers cordon off the scene where they are investigating in Kongsberg, Norway after a man armed with bow killed several people before he was arrested by police on October 13, 2021. (Photo by HAKON MOSVOLD LARSEN/NTB/AFP via Getty Images)

Svane Mathiassen, the prosecutor, said the bow and arrows were just part of the attacker's arsenal. Police have not said what other weapons were used.

Norwegian media reported that the suspect previously had been convicted of burglary and possession of drugs, and last year a local court granted a restraining order ordering him to stay away from his parents for a six-month period after he threatened to kill one of them.

Svane Mathiassen, who is leading the investigation, told Norwegian broadcaster NRK that the suspect will be assessed by forensic psychiatric experts Thursday.

"This is not unusual in such serious cases," she was quoted as saying.

PST said Thursday that the terror threat level for Norway remains unchanged and was considered "moderate." The main church in Kongsberg was open to anyone in need of support.

"I don't think anyone expects to have these kinds of experiences. But nobody could imagine this could happen here in our little town," parish priest Reidar Aasboe told the AP.