Wildlife photographer Konstantine 'Gus' Mamalis spoke with FOX 5 about his journey to photograph the snowy owl on Maryland's Assateague Island.

WASHINGTON - Photographing a snowy owl is a challenge on almost every wildlife photographer's bucket list. But just spotting one in Maryland can be a rewarding experience. In North America, the solitary birds can often be found in the Arctic regions of Alaska and Canada. They migrate through Canada, and occasionally further south. But in Maryland, they are rare winter guests. 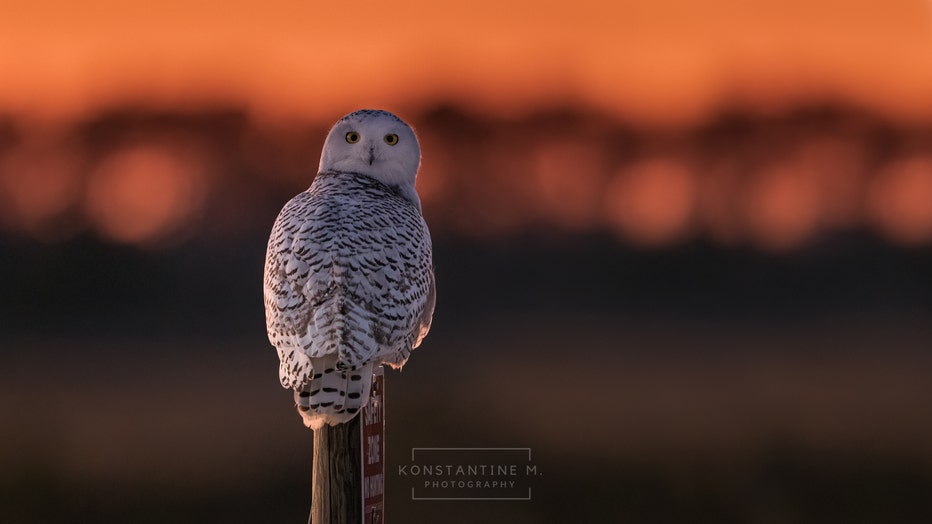 Wildlife photographer Konstantine 'Gus' Mamalis knew what the odds were of capturing photos of snowy owls in the Free State. But his love for wildlife - including 'snowies' -- provided all the motivation he needed to bundle up, grab his gear and give it a go!

In November of last year he set out to Maryland's Eastern Shore with the goal of photographing peregrine falcons -- keeping the snowy owls in the back of his mind as an outside chance. He knew that falcon sightings along beaches with minimal human activity -- like those on Assateague Island -- were fairly common. He said he was able to get several shots of one falcon feeding in the tide and stayed until sundown. No snowy owls in sight that day. 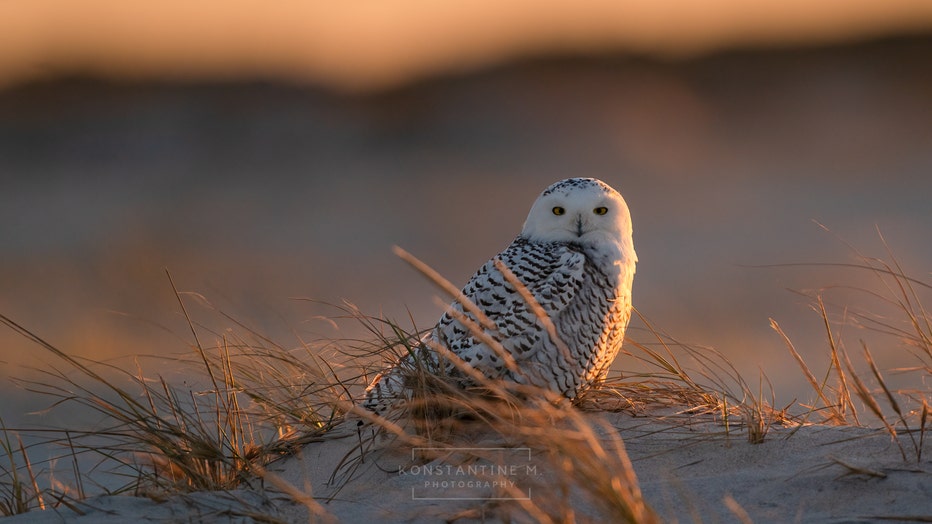 The next weekend, he woke up at 3 a.m. with the goal of getting to the shore by sunrise. This time the snowy owl had grabbed his main focus. He stayed into the afternoon. No sightings. No photos. But he didn't leave empty handed. He made friends with a local woman who knew Assateague Island well. He left her his number.

GRABBED MY GEAR AND WENT

He planned to make another trip the following weekend but at the last minute decided to cancel. That Saturday morning, Gus said he woke up to a message from the woman that he befriended the weekend before. It was a snowy owl -- right in front of her -- on Assateague Island! Right away Gus said he got his camera and the rest of his gear ready, loaded his truck and hit the road. 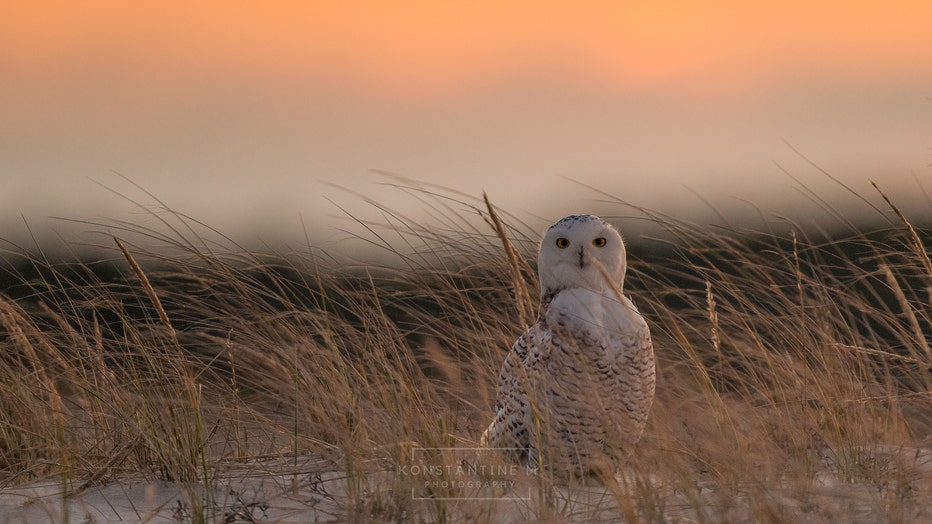 He got to Assateague in the late morning hours and scanned the dunes until he found the magnificent creature. The owl had a characteristic smooth, round head and a brilliant, white and ghostly face. He took photos of it until sunset when he said he could tell it was beginning its evening hunt for food. "As I was leaving, I noticed a silhouette in front of the fiery sunset sky. It was the snowy owl perched on top of a sign reading 'Safety Zone, No Hunting.'" 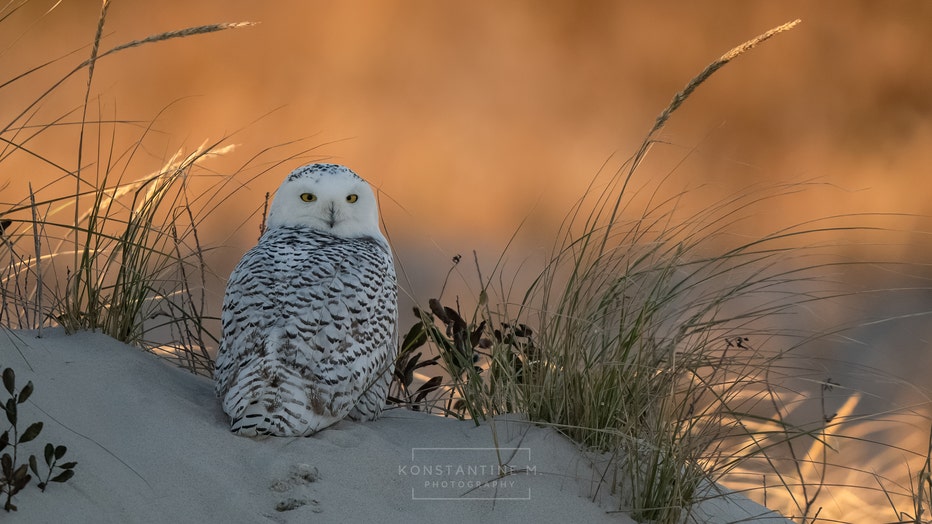 "I was able to get fairly close to the owl and take a picture. Probably my favorite snowy owl photo that I've ever taken," Gus said. "The owl was comfortable as we were separated by another dune, staring at me and preening itself for a couple minutes until it went on its way."

He said he was worried about not getting a sharp photograph because he was shooting handheld at a slow 1/125 shutter speed and practically shooting in the dark. But they turned out perfect!

THE EXPERIENCE WAS AMAZING 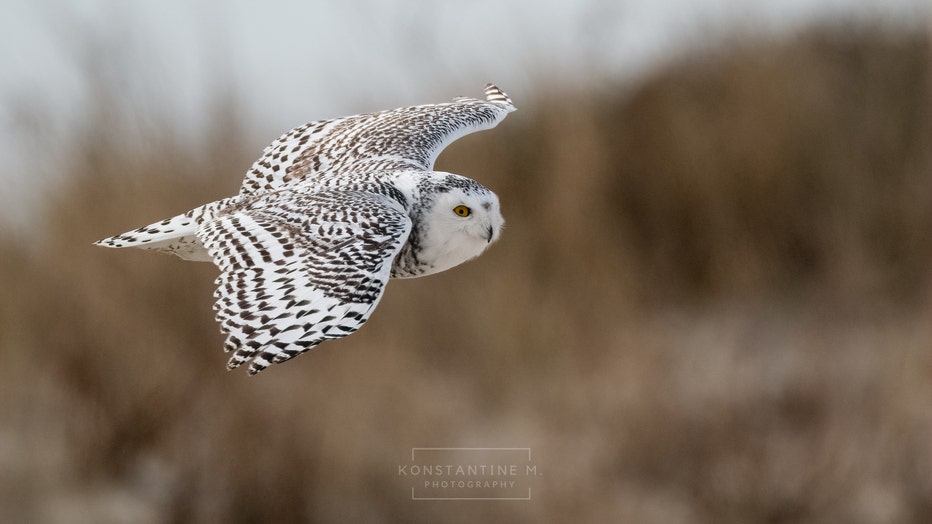 The following weekend Gus returned to Assateague to find a second snowy owl had moved in. He said this owl was distinctively different from the previous one he had photographed with more barring on its body and forehead. He was able to again capture the spectacular beauty of the bird at sunset. "The experience was amazing," Gus said. He observed the snowy owl as it took flight chasing down and attempting to hunt shore birds. 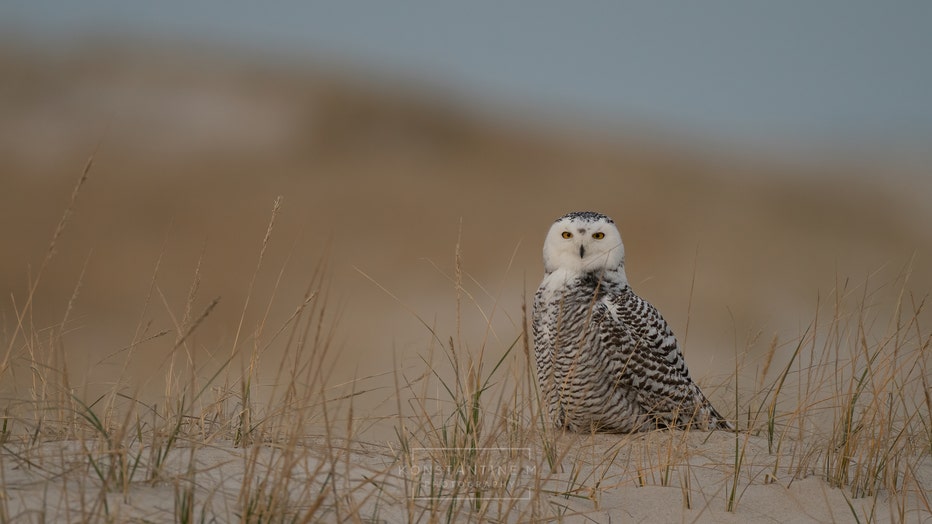 Snowy owls typically breed and raise their young in Arctic regions and usually hunt lemmings -- a significant source of their diet. Sometimes, larger than normal increases in the lemming population can lead to larger clutches of owl eggs. This can sometimes lead to large 'irruptions' of snowy owls and sightings in places like areas of the Northeast U.S. and even parts of Maryland. 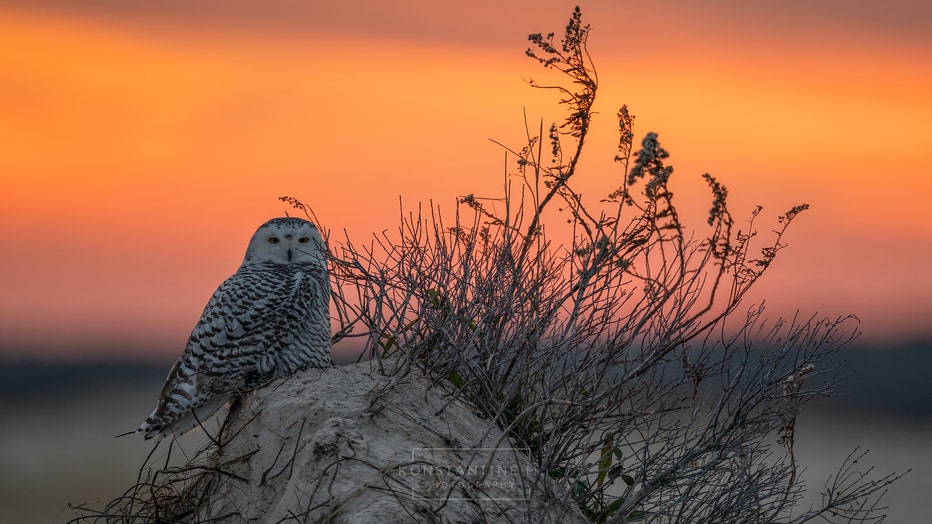 In January, a snowy owl was spotted in New York's Central Park for the first time in over a century. In 2013 and 2014, Gus said the U.S. experienced an extremely rare irruption -- the largest recorded in the last century. During this time, sightings of snowy owls were even reported as far south as Florida.

"When these owls migrate down here for the winter it's likely that they've never seen a human before," Gus said adding that the owl populations are extremely sensitive and can be stressed by negative - often times unintentional - human influence. 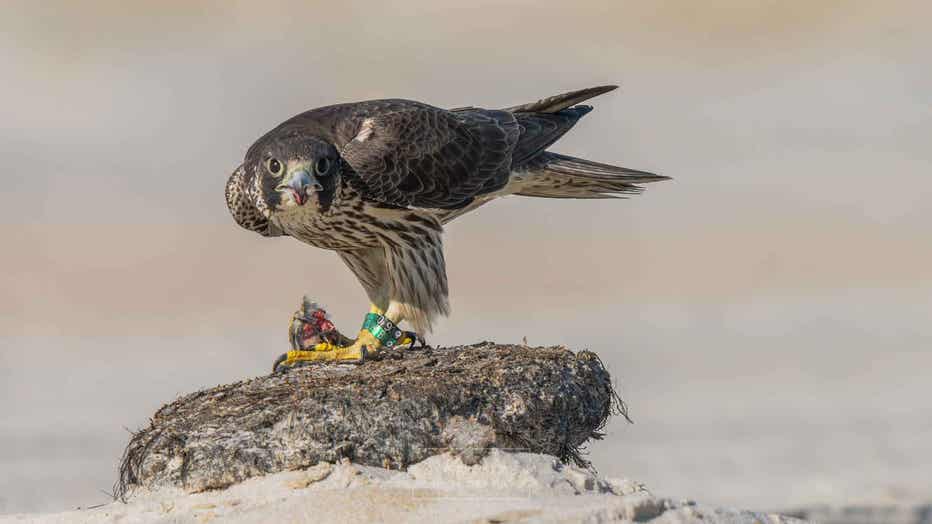 After word spread of the snowy owls making their way to Assateague Island, sightings have gone down. Gus said the last reported sighting he knew of was made back in early January leading him to believe that the owls he saw moved on to quieter areas with fewer people around. He also said bald eagles have taken over a significant amount of territory on the island which could have brought about the relocation of the owls. "It's always important for people to be respectful to the wildlife and keep a reasonable distance from them," he said. 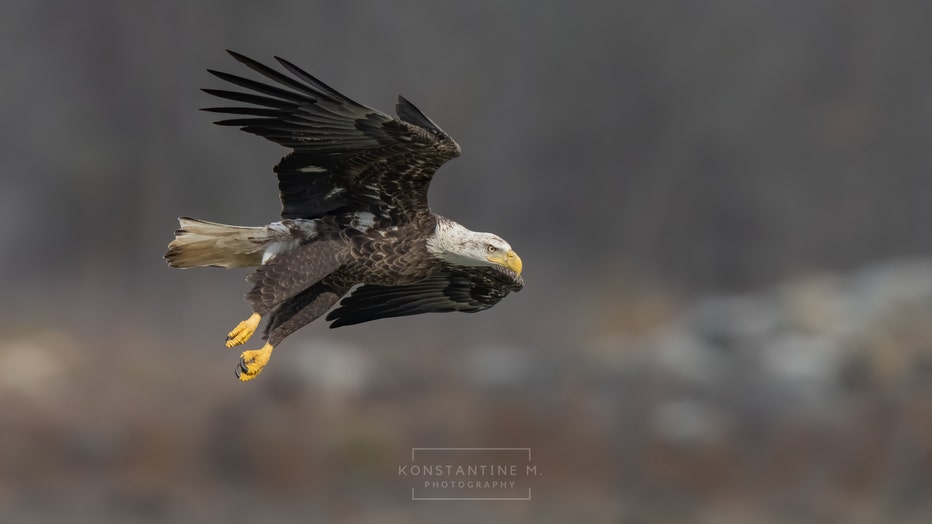 A Baltimore native, Gus got his start in wildlife photography in 2016 when he captured images of eagles at Conowingo Dam in Cecil County. He says he has always had a love for nature and enjoys being able to express it through his photography and show it to the rest of the world.

Gus has photographed wildlife across the Chesapeake Bay area, Maryland's Eastern Shore, throughout the mid-Atlantic and into Canada. 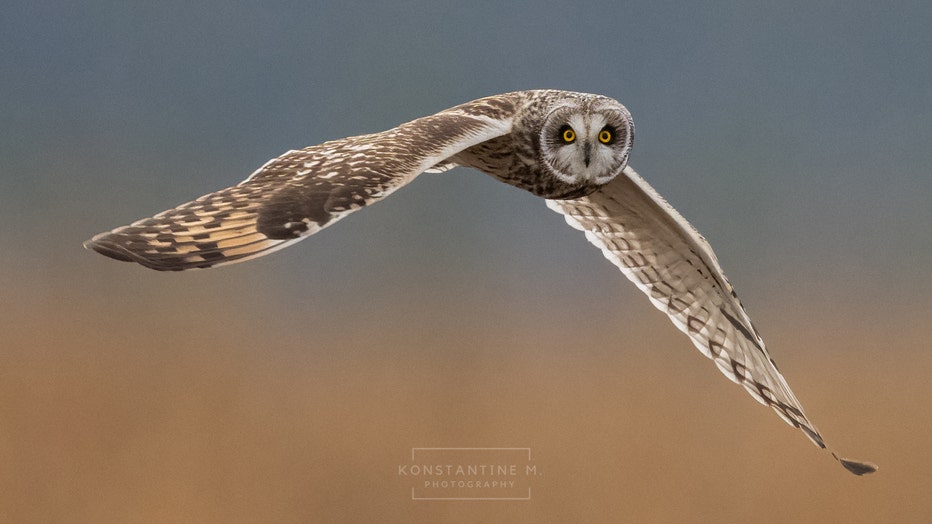 He plans on spending the rest of the winter months focusing on capturing photos of short-eared owls -- but will always remember the incredible experience he had tracking down and photographing the elusive snowies! 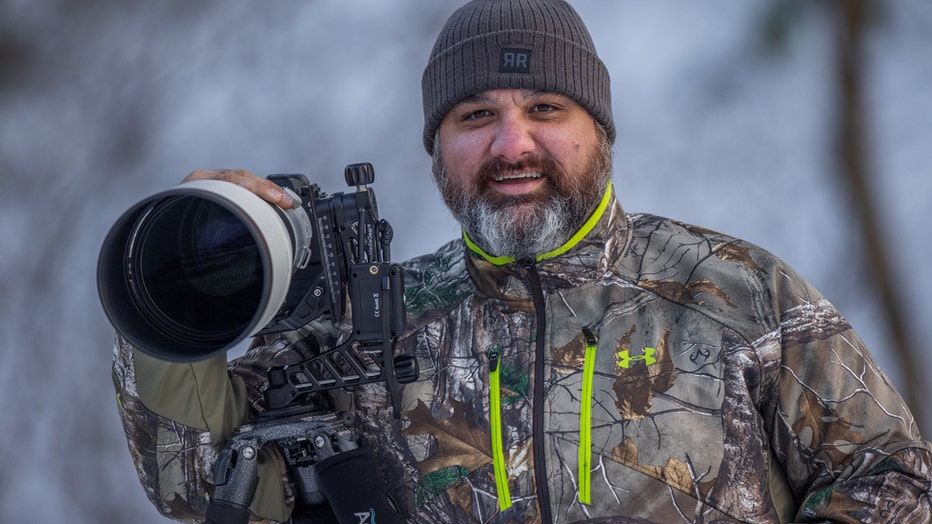 Konstantine Mamalis with his photography gear.