Several new bills are being introduced that could change abortion rights for many women on a state level.

COLUMBIA, S.C. (AP) - South Carolina’s new law banning most abortions was suspended by a federal judge Friday on its second day in effect.

Judge Mary Geiger Lewis put a 14-day temporary restraining order on the law and will renew it until she can hold a more substantial hearing on March 9 on Planned Parenthood's request that it not be enforced until the group's lawsuit against South Carolina is resolved.

Gov. Henry McMaster signed the bill into law Thursday less than an hour after it was sent to him, but the national reproductive health services organization sued even before the governor put ink to paper.

The temporary restraining order was needed in part because more than 75 women are scheduled to have abortions in the state over the next three days, and most of them would be banned under the new law, Planned Parenthood and The Center for Reproductive Rights said in court papers.

The " South Carolina Fetal Heartbeat and Protection from Abortion Act " is similar to abortion restriction laws that a dozen states have previously passed. All were stopped from taking effect and currently are tied up in court. Federal law, which takes precedence over state law, currently allows abortion.

The South Carolina Attorney General's Office said in court papers filed Friday morning that Planned Parenthood can't be sure the law will be rejected by the U.S. Supreme Court. With three justices appointed by Republican former President Donald Trump, they said, the court could overturn Roe v. Wade, the 1973 decision supporting abortion rights.

Lewis said that was not for her to determine. She was quoted by news outlets as saying Friday that South Carolina's new law was far more strict than the current U.S. Supreme Court rulings she must abide by.

Abortion opponents celebrated in the Statehouse lobby outside the House chambers as members gave the bill final approval on Thursday. Standing shoulder to shoulder, they sang "Praise God" to the tune of "Amazing Grace" after the Republican governor held up the new law so they could see his signature, signed with eight different pens. The GOP tried for years to pass the ban, finally succeeding after the party flipped three Senate seats in 2020. 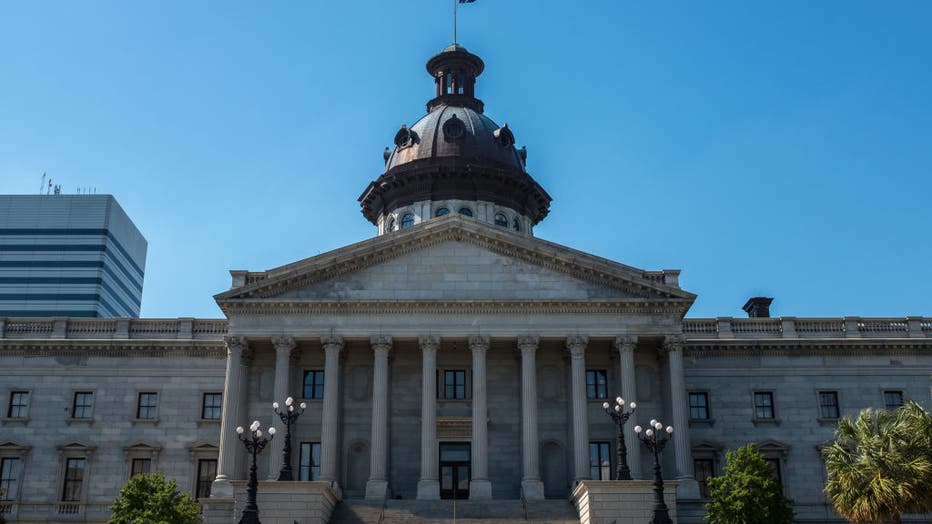 An exterior view of the South Carolina State House, Columbia - construction work first began in 1851 and was completed in 1907, it was designated a national historic landmark in 1976 for its significance in the post-civil war reconstruction era. (Pho

The law requires doctors to perform ultrasounds to check for a heartbeat in the fetus, which can typically be detected about six weeks after conception. If one is detected, the abortion can only be performed if the pregnancy was caused by rape or incest or the mother’s life is in danger.

Opponents of the ban said many women don't know they are pregnant by then, especially if they aren't trying to conceive. And with such an early deadline, the law gives women little time to consider whether to have an abortion.

"The act would force patients to race to a health center for an abortion, even if they did not yet feel confident in their decision," Katherine Farris, chief medical officer for Planned Parenthood South Atlantic, wrote in court papers.

The suit says a high rate of women, especially African Americans, die during or immediately after childbirth in South Carolina and the abortion ban would fall hardest on low-income women, who wouldn’t be able to travel to a nearby state where abortion is still permitted.

The U.S. Supreme Court has struck down state laws that prevent abortions before a fetus can live outside the womb.

Planned Parenthood lawyers noted that South Carolina legislators this year did not change part of state law that said fetuses are considered viable in the 24th week of pregnancy.

Lawyers for the state are making a different argument: that a heartbeat in a fetus is an important milestone in a pregnancy. They cite the new law, which states that "contemporary medical research" has found "fewer than 5% of all natural pregnancies end in spontaneous miscarriage after the detection of a fetal heartbeat."

The new law does not punish a pregnant woman for getting an illegal abortion, but the person who performs the procedure can be charged with a felony, sentenced up to two years and fined $10,000 if found guilty.