Rod Blagojevich has been released from prison after President Donald Trump announced Tuesday he commuted the sentence of the former Illinois governor.

A crowd of media swarmed Blagojevich at O'Hare Airport and at his home in Ravenswood Manor on the North Side. He wasn't able to say too much as his security team whisked him away into a vehicle at the airport and into his front door when he arrived home.

Blagojevich was able to briefly sign some autographs at O'Hare. 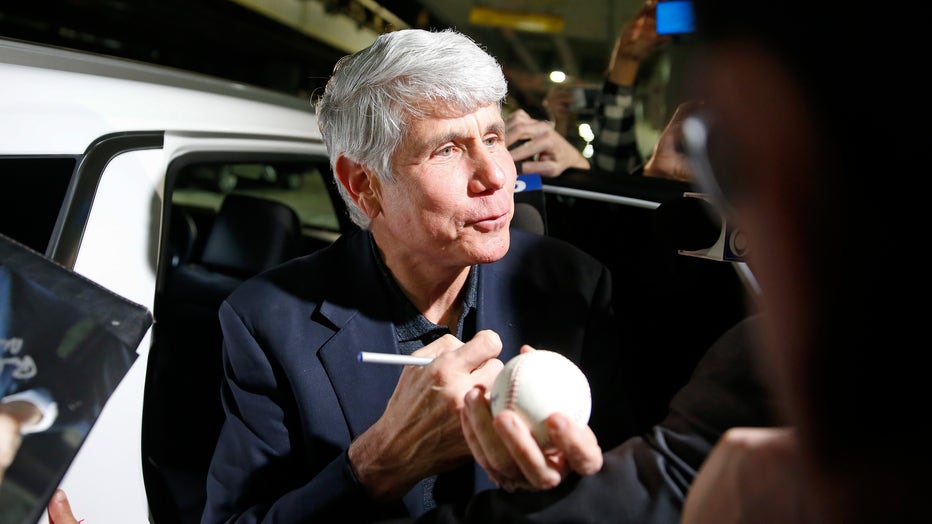 Trump told reporters on Tuesday that Blagojevich's sentence was "ridiculous."

“He’ll be able to go back home with his family after serving eight years in jail,” Trump said.

The Chicago Tribune on Tuesday night posted a photo of thesilver-haired Blagojevich at Denver International Airport, where he later boarded a plane for Chicago. Blagojevich was famously fastidious about his dark hair as governor, but it went all white because hair dyes are banned in prison. 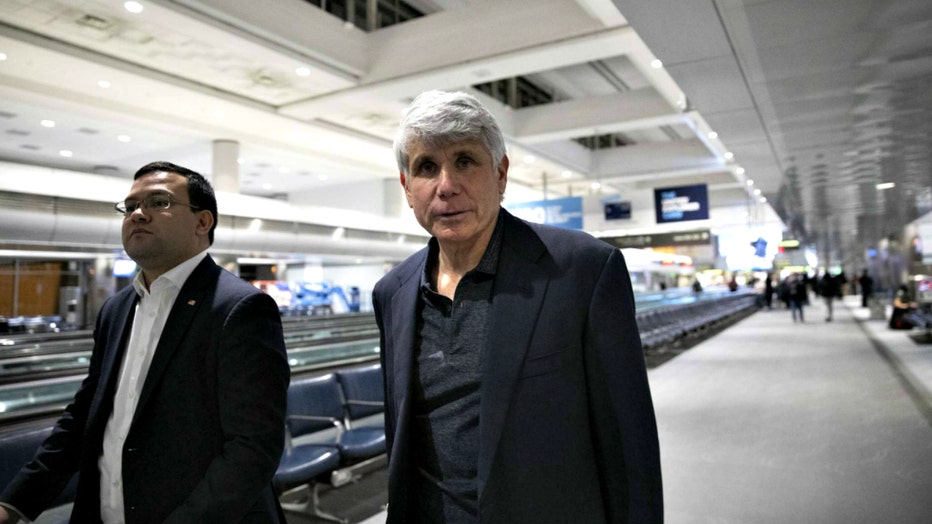 Promising he will have more to say in a Wednesday news conference, Blagojevich said he appreciated the president's action.

He told WGN, “[Trump] didn’t have to do this, he’s a Republican president and I was a Democratic governor.” 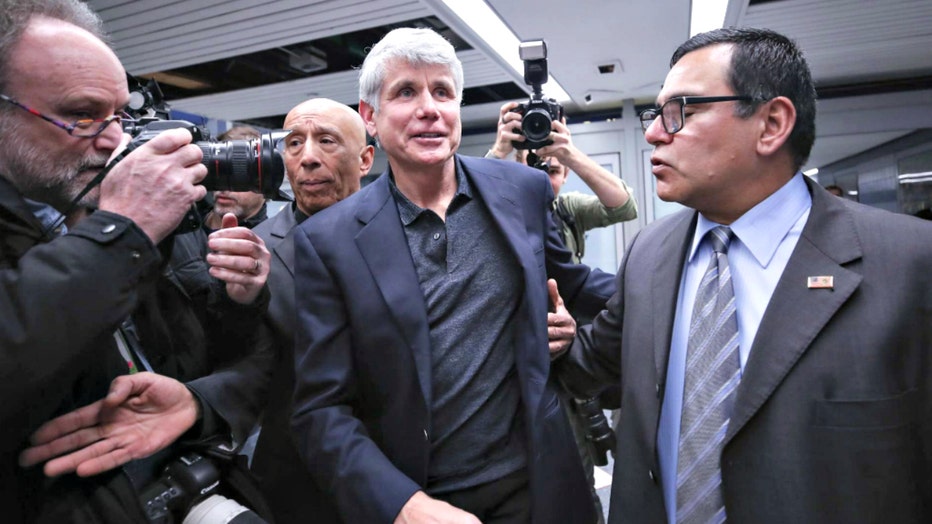 Blagojevich, 63, who hails from a state with a long history of pay-to-play schemes, walked out of prison in Colorado Tuesday night. He was serving a 14-year sentence after being convicted of 18 felony corruption charges in 2010, including trying to sell the U.S. Senate seat that was vacated by Barack Obama and trying to shake down a children's hospital.

Trump was considering a commutation for Blagojevich last year, but plans were put on hold.

"Many people disagreed with the sentence," Trump told reporters on Tuesday.

Trump made clear that he saw similarities between efforts to investigate his own conduct and those who took down Blagojevich.

"He's a Democrat, he's not a Republican. It was a prosecution by the same people - Comey, Fitzpatrick, the same group," Trump said. He was referring to Patrick Fitzgerald, the former U.S. attorney who prosecuted Blagojevich and now represents former FBI Director James Comey, whom Trump fired from the agency in May 2017.

"Very far from his children," Trump said. "They rarely get to see their father outside of an orange uniform. I saw that and I did commute his sentence."

The president also sounded off on the harshness of Blagojevich's sentence.

"That was a tremendously powerful, ridiculous sentence in my opinion," Trump said.

One of Blagojevich lawyers said she refused to believe it at first when word of her client's possible release began to spread, fearing that the president might not follow through.

“When it became obvious it was real, I got tears in my eyes," said Lauren Kaesberg. “It was overwhelming.”

Blagojevich neighbors react to his release from prison

Blagojevich, 63, who hails from a state with a long history of pay-to-play schemes, walked out of prison in Colorado Tuesday night.

Others in Illinois, including the governor, said setting Blagojevich free was a mistake.

Trump “has abused his pardon power in inexplicable ways to reward his friends and condone corruption, and I deeply believe this pardon sends the wrong message at the wrong time,” Gov. J.B. Pritzker said in a written statement.

“In a state where corrupt, machine-style politics is still all too common, it's important that those found guilty serve their prison sentence in its entirety," said the the chairman of the Illinois GOP, Tim Schneider.

The White House cited support from several Illinois-based leaders, including the Rev. Jesse Jackson, as supporting Blagojevich's early release. More than 100 of his fellow inmates also sent in letters of support.

The former federal prosecution team handling the Blagojevich case issued a statement regarding his commutation, condemning Trump's decision: "While the President has the power to reduce Mr. Blagojevich’s sentence, the fact remains that the former governor was convicted of very serious crimes. His prosecution serves as proof that elected officials who betray those they are elected to serve will be held to account."

Blagojevich exhausted his last appellate option in 2018 and had seemed destined to remain behind bars until his projected 2024 release date.

Blagojevich’s conviction was notable, even in a state where four of the last 10 governors have gone to prison for corruption. Judge James Zagel — who in 2011 sentenced Blagojevich to the longest prison term yet for an Illinois politician — said when a governor “goes bad, the fabric of Illinois is torn and disfigured.”

Blagojevich became the brunt of jokes for foul-mouthed rants on wiretaps released after his Dec. 9, 2008, arrest while still governor. On the most notorious recording, he gushes about profiting by naming someone to the seat Obama vacated to become president: “I’ve got this thing and it’s f------ golden. And I’m just not giving it up for f------ nothing.”

Trump said in August 2019 he was seriously considering commuting the sentence of Blagojevich.

President Trump was considering a commutation for Blagojevich last year, but plans were put on hold amid worries over pushback.

Prosecutors have balked at the notion long promoted by Blagojevich that he engaged in common political horse-trading and was a victim of an overzealous U.S. attorney, Patrick Fitzgerald. After Blagojevich's arrest, Fitzgerald said the governor had gone on "a political corruption crime spree" that would make Abraham Lincoln turn over in his grave.

A joint statement from Fitzgerald and the lead attorneys at Blagojevich's trial, none of whom work in the U.S. attorney's office anymore, stopped short of criticizing Trump's decision. But they highlighted the convictions, including for trying to shake down the children's hospital, saying, “Mr. Blagojevich remains a felon."

As time had passed with no action by Trump, Blagojevich's wife, Patti, went on a media blitz with an apparent target audience of one: Trump himself.

Patti Blagojevich, who comes from an influential family of Chicago Democrats, went out of her way to praise the Republican president. She gave several interviews on Fox News, one of the president's favorite news sources, likening the investigation of her husband to the Russia investigation that Trump called a "witch hunt."

In previous comments, Trump expressed sympathy for the Blagojevich daughters and admiration for Patti.

At Blagojevich's home, his wife's sister, Deb Mell, emerged onto the porch after a rideshare driver arrived to deliver food. She said the logistics of the former governor's return were not complete and that Patti Blagojevich would not speak to reporters until her husband is home.

“The kids are overjoyed and Patti’s ecstatic,” Mell said.

Trump expressed some sympathy for Blagojevich when he appeared on "Celebrity Apprentice" in 2010, before his first corruption trial started. When Trump "fired" Blagojevich as a contestant, he praised him for how he was fighting his criminal case, telling him, “You have a hell of a lot of guts.”

He later poll-tested the matter, asking for a show of hands of those who supported clemency at an October 2019 fundraiser at his Chicago hotel. Most of the 200 to 300 attendees raised their hands, The Wall Street Journal reported, citing several people at the event.

Blagojevich testified at his 2011 retrial, describing himself as a flawed dreamer grounded in his parents’ working-class values. He sought to humanize himself to counteract the blunt, profane, seemingly greedy Blagojevich heard on wiretap recordings played in court by prosecutors over several weeks. He said the hours of FBI recordings were the ramblings of a politician who liked to think out loud.

But jurors accepted evidence that Blagojevich demanded a $50,000 donation from the head of a children’s hospital in return for increased state support, and extorted $100,000 in donations from two horse racing tracks and a racing executive in exchange for quick approval of legislation the tracks wanted.

The Illinois House in January 2009 voted 114-1 to impeach Blagojevich, and the state Senate voted unanimously to remove him, making him the first Illinois governor in history to be removed by lawmakers. He entered prison in March 2012.

He was originally convicted on 18 counts, including lying to the FBI, wire fraud for trying to trade an appointment to the Obama seat for contributions, and for the attempted extortion of a children’s hospital executive. The 7th U.S. Circuit Court of Appeals in Chicago in 2015 tossed five of 18 convictions, including ones in which he offered to appoint someone to a high-paying job in the Senate.

The politics behind the commutation of Rod Blagojevich

President Trump made clear that he saw similarities between efforts to investigate his own conduct and those who took down Blagojevich.

The appeals court ordered the trial judge to resentence Blagojevich, but suggested it would be appropriate to hand him the same sentence, given the gravity of the crimes. Blagojevich appeared via live video from prison during the 2016 resentencing and asked for leniency. The judge gave him the same 14-year term, saying it was below federal guidelines when he imposed it the first time.

Blagojevich had once aspired to run for president himself but entered the Federal Correctional Institution Englewood in suburban Denver in 2012, disgraced and broke. Court documents filed by his lawyers in 2016 portrayed Blagojevich -- known as brash in his days as governor -- as humble and self-effacing, as well as an insightful life coach and lecturer on everything from the Civil War to Richard Nixon. Blagojevich, an Elvis Presley fan, also formed a prison band called "The Jailhouse Rockers." 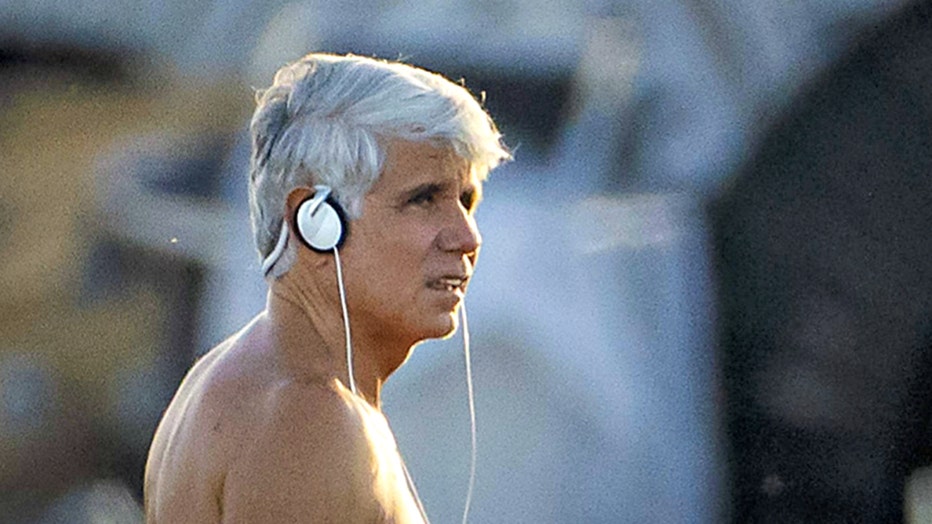 - 1993: Blagojevich begins a three-year stint as an Illinois state representative.

- June 2004: Influential Republican Stuart Levine resigns from a powerful Illinois health board, marking the first public indication that the Blagojevich administration is under federal investigation.

- June 2006: In a letter, U.S. Attorney Patrick Fitzgerald says he has witnesses to "very serious allegations of endemic hiring fraud" in the Blagojevich administration.

- October 2006: Antoin "Tony" Rezko, a top Blagojevich fundraiser, is indicted on federal charges of using his political influence to squeeze kickbacks from companies seeking to do business with the state. Businessman Stuart Levine pleads guilty to mail fraud and money laundering as part of the Rezko scheme and agrees to cooperate.

- January 2009: The Illinois House votes 114-1 to impeach Blagojevich, the first Illinois governor in history to be impeached. The Illinois Senate votes unanimously to remove Blagojevich from office.

- Aug. 16, 2010: After deliberating 14 days, a deadlocked jury reaches a verdict on just one count - lying to the FBI. Prosecutors immediately announce in court they will retry Blagojevich. Prosecutors later drop all charges against Rod Blagojevich's co-defendant brother, Rob Blagojevich.

- June 27, 2011: After nine days of deliberations, jurors find Blagojevich guilty of 18 counts, including allegations that he tried to sell or trade President Barack Obama's old Senate seat. Jurors reached a not guilty verdict on one count and deadlocked on two others.

- July 2015: 7th U.S. Circuit Court of Appeals dismisses just five of 18 counts and rules prosecutors did not prove Blagojevich broke the law when he tried to get a Cabinet position in President Barack Obama's administration in exchange for trying to appoint Obama adviser Valerie Jarrett to Obama's old U.S. Senate seat. Counts in which he sought contributions in exchange for a Senate seat appointment were upheld. Court says Blagojevich can be retried or resentenced on the counts that remain.

- Aug. 9, 2016: After prosecutors decline to retry Blagojevich, trial Judge James Zagel resentences him on the 13 counts that still stand. Even with the reduced number of convictions, Zagel refuses to lower the original 14-year sentence.

- December 2016: Blagojevich submits a request to Obama to have his sentence commuted, but Obama does not act on the request before he leaves office in January 2017. Blagojevich again asks a U.S. appeals court to nullify his 14-year prison term and order a third sentencing hearing.

- April 21, 2017: An appeals court in Chicago rejects the request from Blagojevich for another sentencing hearing.

- May 31, 2018: President Donald Trump says he is thinking about clemency for Blagojevich and Martha Stewart. Both had connections to Trump's "Celebrity Apprentice" reality television show.

- Aug. 8, 2019: Trump tweets that the White House is still reviewing the possibility of commuting Blagojevich's sentence. Trump broaches the issue several times in proceeding months. But amid pushback from Republicans and Democrats, the prospects of a pardon appear to diminish.