Prince George’s County Executive Angela Alsobrooks announced a curfew for juveniles Monday in an effort to address the deadly month of August. Comments exploded online – from "it’s about time" and "it’s a start" – to those concerned about negative police-teen interactions. Some say it won’t help because violence happens at all times of the day.

"I know this isn’t a popular thing to say, but the truth of the matter is, it’s a fair question: Where are their parents? Where are their aunties, where are the uncles, and other family members who are responsible?," Alsobrooks asked shortly before making the curfew announcement.

Starting this upcoming weekend and lasting for at least 30 days, those under 17 years old will have to be home between 10 p.m. and 5 a.m. Sunday to Thursday and just before midnight to 5 a.m. on Fridays and Saturdays. That is unless there is some kind of exemption. Otherwise, the juvenile has to be with an adult.

Alsobrooks said guardians will get a warning. Then it goes to fines, from $50 to $250.

The ordinance mentions that after the first warning, police can take a juvenile into custody if they’re found to be in violation of the curfew. The juvenile can then be released to Social Services if the guardian does not respond.

The law also says operators of a public place, like an amusement park, found in violation can also be fined. The fine scale is $100 for the first offense, $250 for the second, and then $500 for any additional violations. 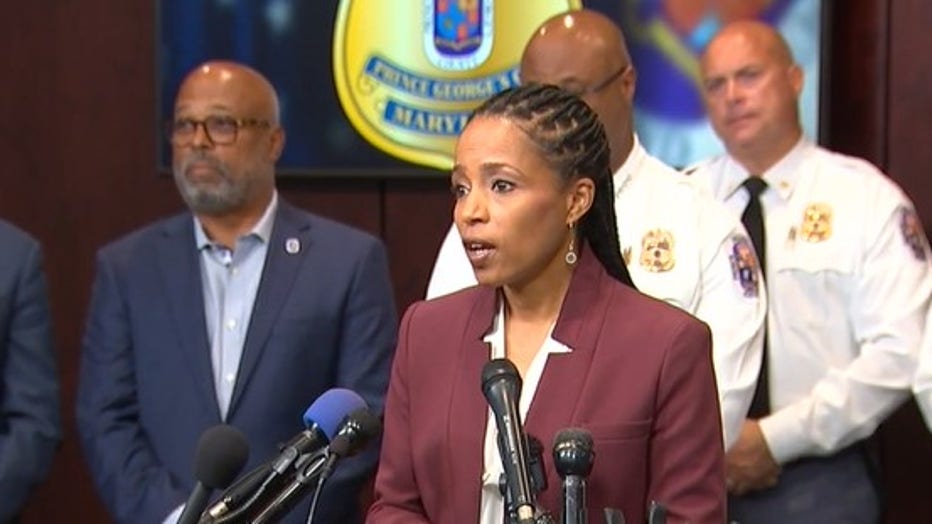 The curfew is not new. Police will just be enforcing it now, according to Alsobrooks.

The county executive also told reporters that the law has been on the books since 1995.

Comments exploded online – from "it’s about time" and "it’s a start" – to those concerned about negative police-teen interactions. Some say it won’t help because violence happens at all times of the day.

In 2000, the Urban Institute released a study on Prince George’s County’s curfew. It found the impact of targeting 12-to-16-year-olds to be "small and not statistically significant." The author told fox 5's Stephanie Ramirez over the phone that violence did go down some among those 22-25 years old.

Essentially, it was because more officers targeting teens also served as a deterrent for others. However, the author also noted this was not exactly a time when police departments were stretched.

Society at the time was also more supportive of "tough on crime" approaches.

Outside of the same Ritchie Road 7-Eleven, where three people were shot and a 15-year-old was killed over the weekend, Derrick Tongue reacted to the curfew and violence by telling FOX 5, "There’s no guidance, no guidance in the homes. No guidance in the streets."

Dannel Daley told FOX 5, speaking of his household, that he knows it’s important to have a space for youths to appropriately express what they’re going through.

"I understand what the county’s doing currently, but I feel like maybe some of the direction needs to be helped with households that are struggling or making sure the resources are available to everyone," Daley said. "If there’s a free guidance counsel available to each student or each classroom. What can we do to kind of just help with the emotional development that are out there now?"

"In short, we have an accountability problem in our county," Alsobrooks stated. "And I have heard from many of you in the community who are asking, rightfully so, what I am doing to address the rise in violent crime in our county. Again, it’s a reasonable question but to be clear, I want everyone to understand, I control one part of this system."

The county executive has made some of these same arguments before, including around the time she announced the National Harbor curfew in 2020, or just this past February when officials launched a Violence Prevention Task Force and the Hope Collective effort.

Curfew to go into effect amid violence in Prince George's County

The curfew comes after a District 15-year-old was killed and was among 11 people shot in Prince George’s this Labor Day weekend. The Police Chief confirmed today that August was actually the county’s deadliest in three decades. This curfew, starting this weekend, will last for 30 days, the Prince George's county executive said those under 17-years-old will have to be home between 10PM and 5AM Monday to Thursdays – and just before midnight to 5AM on Fridays and Saturdays unless there’s some kind of exemption. Guardians will get a warning and then it goes to fines – from $50 to $250. The child could be released to social services if the Guardian doesn’t respond.

After the curfew announcement on Monday, there was some finger pointing. The county executive focused on juvenile offenders not being held accountable once arrested.

The state’s attorney pointed to a recently updated Maryland law impacting how juveniles are held. She also noted how the rulings of judges have to be respected, even if prosecutors disagree.

Maryland State Senator William Smith Jr., recently worked on major juvenile justice reform as the Senate Judicial Proceedings Committee Chair. He said some of those measures haven’t started yet, and also applauded the county executive on the curfew as a tool.

"You’ve got to pay attention to what the numbers tell us," he said. "Obviously, if you go from 2019 to 2020, 2020 to 2021, what happened? You had a pandemic. And a lot of things shut down. Arrests were down, incarceration was down, everything was down. And so those numbers aren’t really directly reflective of what was going on. There’s no ground [truth] there. It’s hard to deduce any sort of hardcore information from the pandemic. What we do know is that juvenile crime by and large is down and has been down over the last 20-years, and our long-term reforms have to keep an eye towards those trend lines and not those headlines."

"Now obviously any element of crime, juvenile or otherwise, needs to be addressed," the senator added. "Folks that commit those crimes need to be held accountable. I think we have to understand that juveniles need different responses than adults because they’re still developing, and I think that if we are going to be thoughtful policymakers, we can do both things. We can hold people accountable, and we can make sure there’s an element of restorative justice there to accompany that support."

Sherman Hardy stormed out of Alsobrooks' news conference Monday. He ran against Alsobrooks in the 2022 primary and lost.

"Why did we wait so late to actually initiate a curfew? The summer is over," Hardy said. "She didn’t talk about kids bringing guns to schools, or did I miss that in my rage? You know, what’s up with that? You know we are not talking about the issues that are really impacting people in this county and all of it is just coming out to do a glorious press conference to come up and talk to y'all."

Prince George’s County Council Chair Calvin Hawkins was also in attendance at the Monday news conference. He vowed to hold the judiciary accountable through oversight.