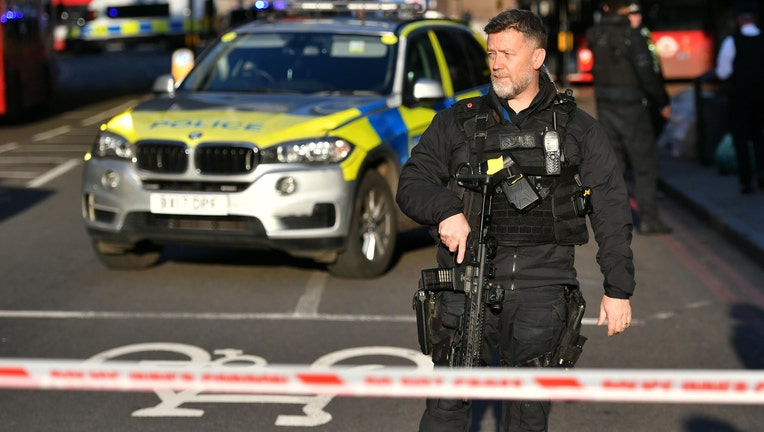 Police were at the scene of an incident on London Bridge in central London. (Photo by Dominic Lipinski/PA Images via Getty Images)

LONDON - Friday's stabbing attack on the London Bridge that left two people dead and three others wounded had British Prime Minister Boris Johnson arguing afterward that it had been a "mistake" to grant an early release to the suspect, an ex-convict who was shot and killed by police.

Johnson said he had "long argued" against allowing "serious and violent criminals to come out of prison early.”

"It is very important that we get out of that habit and that we enforce the appropriate sentences for dangerous criminals, especially for terrorists, that I think the public will want to see,” Johnson said.

Following the attack, London police identified the suspect as 28-year-old Usman Khan, who lived in the Staffordshire area and was convicted in 2012 for "terrorism offenses."

Authorities said Khan had been released in December 2018 "on license," meaning he had to meet certain conditions or face being sent back to prison, according to Metropolitan Police Counterterrorism Chief Neil Basu.

Police were treating the stabbings as a terrorist attack.

"A key line of [inquiry] now is to establish how he came to carry out this attack," the chief said, adding that police are conducting searches at a Staffordshire address.

The suspect, who wore a fake explosive vest as the attack unfolded, was tackled by members of the public before being shot by "specialist armed officers," and he died at the scene, according to Basu.

"Whilst we are still in the early stages of the investigation, at this time we are not actively seeking anyone else in relation to the attack," Basu said, noting that the terrorism investigation continues and police are making sure "that no other people were involved in this attack and that there is no outstanding threat to the public."

A man and a woman were killed during the attack, and two women and a man were injured and remain in the hospital, according to the chief.

Police were called to the London Bridge area just before 2 p.m. local time on Friday.

"The circumstances, as we currently understand them, are that the attacker attended an event earlier on Friday afternoon at Fishmonger’s Hall called ‘Learning Together,’" Basu said. "We believe that the attack began inside before he left the building and proceeded onto London Bridge, where he was detained and subsequently confronted and shot by armed officers."

Public safety is the top priority, and Basu asked the public to continue to avoid the area as police continue to enhance patrols in the city and across London.

British media outlets including the BBC and Sky News had reported that the attacker was an ex-prisoner with links to Islamic extremist groups, but officials waited to confirm the suspect's identity.

"My heart goes out to them, their loved ones and to everybody affected," he said in a statement. "London will never be cowed by terrorism. Terrorism will never win."

"I want to reassure Londoners and visitors that there will be enhanced police patrols, including firearms teams, on the streets of London this weekend," he added. "I will be attending the government's emergency COBRA meeting tonight."

Basu pleaded with the public to share any information, images or footage of the incident by visiting the U.K. Police Image Appeal site, or to call police with any information that could help the investigation.

"The public should continue to remain vigilant and report any concerns they have to police," Basu added.