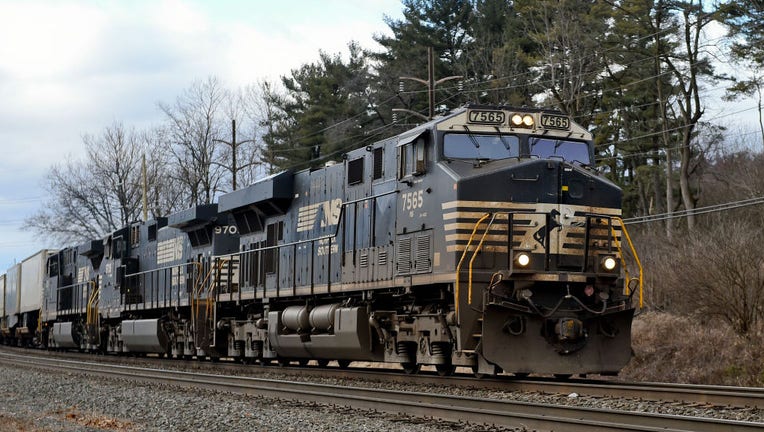 FILE-A Norfolk Southern freight train is traveling East. Government officials and a variety of businesses are bracing for the possibility of a nationwide rail strike that could impact shipments for all goods. (Ben Hasty/MediaNews Group/Reading Eagle

OMAHA, Neb. - Members of one union rejected a tentative deal with the largest U.S. freight railroads Wednesday while three other unions remained at the bargaining table just days ahead of a strike deadline, threatening to intensify snarls in the nation's supply chain that have contributed to rising prices.

About 4,900 members of the International Association of Machinists and Aerospace Workers District 19 voted to reject the tentative agreement negotiated by IAM leadership with the railroads, the union said Wednesday.

Railroads need to reach an agreement with all their unions to avert a Friday strike deadline.

Government officials and a variety of businesses are bracing for the possibility of a nationwide rail strike that would paralyze shipments of everything from crude and clothing to cars, a potential calamity for businesses that have struggled for more than two years due to COVID-19 related supply chain breakdowns.

There are 12 unions — one with two separate divisions — that must agree to the tentative deals. So far, nine had agreed to tentative deals and three others are still at the bargaining table. IAM members were the first to reject their deal while other votes are expected Wednesday.

The tentative deals are based on the recommendations of a Presidential Emergency Board Joe Biden appointed this summer that called for 24% raises and $5,000 in bonuses in a five-year deal that’s retroactive to 2020. The deal also includes one additional paid leave day a year and higher health insurance costs.

RELATED: Here’s how a possible railroad strike could impact AMTRAK, MARC and VRE service in the DC area

The key unions that represent the conductors and engineers who drive trains are holding out in the hope that railroads will agree to go beyond those recommendations and address some of their concerns about unpredictable schedules and strict attendance policies that they say make it difficult to take any time off.

The many businesses that rely on railroads to deliver their raw materials and finished products say a rail strike would cause significant problems particularly for oil refineries, chemical businesses, auto makers and agricultural groups.

A freight rail strike would also disrupt passenger traffic because Amtrak and many commuter railroads operate on tracks owned by the freight railroads.

What led to talks of a potential rail strike?

According to the Associated Press, railroad workers have gone without a raise since 2019 while the contract talks continued. The workers expect to be compensated after staying on the job throughout the pandemic and enduring extensive job cuts in recent years.

The major freight railroads have eliminated nearly one-third of their jobs over the past six years as they overhauled their operations to run fewer, longer trains that need fewer locomotives and employees, the AP reported in August. Unions explained to the AP that the railroad companies expect more from the workers who remain, and that some railroads' tightened attendance policies make it hard to take time off because of all the job cuts.

Many of the companies who ship goods on the rails, labor groups and regulators blame the railroads’ current shipping problems on those deep worker cuts. But the railroads say the nationwide worker shortages and difficult hiring environment has kept them from hiring enough workers to handle all the shipments as the economy recovers.

In the contract talks, the unions also opposed railroad proposals to cut train crews down from two people to one.  Union officials tell the AP they don’t want to strike but they appear ready to act if it does come to that. The Brotherhood of Locomotive Engineers and Trainmen said that more then 99% of its members voted to authorize the union to go on strike if a deal can’t be reached.

Could Congress block a strike?

If the two sides can't agree on a deal by the end of the week, Congress is expected to step in to block a strike because of the dire economic consequences if a strike happens because so many businesses rely on railroads to deliver their raw materials and finished products.

In past national rail labor disputes, lawmakers have voted to impose terms on the railroads before workers could strike.

Reaching a new deal would help railroad companies hire more workers, which they are struggling to do. Major railroads have said they need to hire hundreds of additional workers to handle the increased demand as the economy recovers and deals with delays and missed deliveries that plagued their service industry this year.