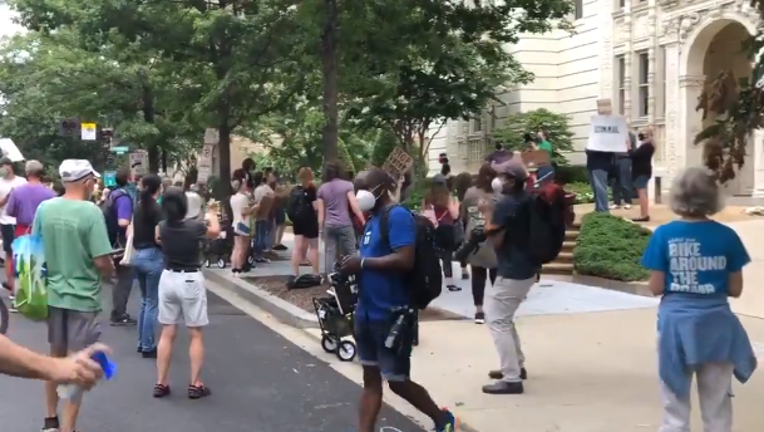 Protesters rallied outside the D.C. home of Postmaster General Louis DeJoy early Saturday morning, calling on him to resign.

WASHINGTON - Dozens of protesters banged on pots and pans early Saturday morning outside of the D.C. home of Postmaster General Louis DeJoy, offering their own "wake-up call" for the controversial Trump administration official to resign.

“Hey-hey, ho-ho, Louis DeJoy has got to go,” several people shouted, marching up and down Connecticut Avenue Northwest in the higher-end DC neighborhood.

The protests come as the U.S. Postal Service reportedly warns at least 46 states and the District of Columbia of significant delays that could impact the 2020 election.

The postal service says it is unable to guarantee all ballots mailed in will arrive on time to be counted.

RELATED: USPS warns 46 states, DC about election mail delays that could affect whether ballots get counted

The warning comes after the President acknowledged his stance on blocking funding to the postal service could hinder the agency expected to process millions of mail-in ballots this year due to the coronavirus pandemic.

Recent reporting also revealed DeJoy, a Republican donor tapped by Trump to lead the agency in June, implemented operational changes that have led to delivering delays all across the country.

Alex Dodds rose early and brought her young son, making sure there were there for the protest.

“I mean the news just came out this week that the post-all of these disruptions were happening to the US postal service. I’ve seen tons of activity – tons of discussion on my neighborhood list serve, actually, about neighbors who have been effected – people’s medications not being delivered on time. And that together with the, you know, very intentional comments by the President that this was an intentional strategy was something that I couldn’t say no to. I had to come out and take action,” said Dodds.

Alice, a protester with “Shutdown_DC” who did not give her last name, told FOX 5, “There is no safer way for people to vote, then to vote by mail. And this administration is actively trying to dismantle that system so that people cannot vote. And that flies in the face of Democracy.”

Mickey Goldberg, who says she was born in D.C. but traveled from Severna Park, Maryland to take part, has been trying to help people register properly so they can vote by mail this year.

“The U.S. Postal Service is a fundamental part of our Democracy. It’s a necessary part of living in the United States and it’s not a service that should be taken away,” Dodds told FOX 5.

We did ask a few of the protesters whether they knew of any Republican-supporters at the protest. They told FOX 5 they did not know but quickly responded: there should be.

Those protesters said this should not be a partisan issue.