IRWIN, Penn. - A 5-year-old girl undergoing chemotherapy shows a “zest for life” and brings her “princess energy” to every appointment while wearing an elaborate gown each time.

Lilli Durante, of Irwin, Pennsylvania, suffers from optic pathway glioma, which is a brain tumor on her optic nerve. The condition, if left untreated, could cause her to lose her vision. Doctors determined chemotherapy would be the best form of treatment to try to shrink the tumor and preserve her sight.

“One of her very first appointments that she had before we knew that she was going to have chemo, she wore this fancy dress, and she got a lot of compliments on it and everybody loved it and it kind of started from there,” said Courtney Durante, who is Lilli’s mother. “Then it just became a thing.”

Lilli began treatment at UPMC Children's Hospital of Pittsburgh in February. She has had about 20 chemo treatments for which she has dressed up in princess gowns each time.

“It gives her something to look forward to. She really enjoys picking it out the night before and I think she enjoys the compliments and the attention she gets from it. She loves the dresses and the sparkles. She also loves being fancy and dressing up fancy,” the mother said. 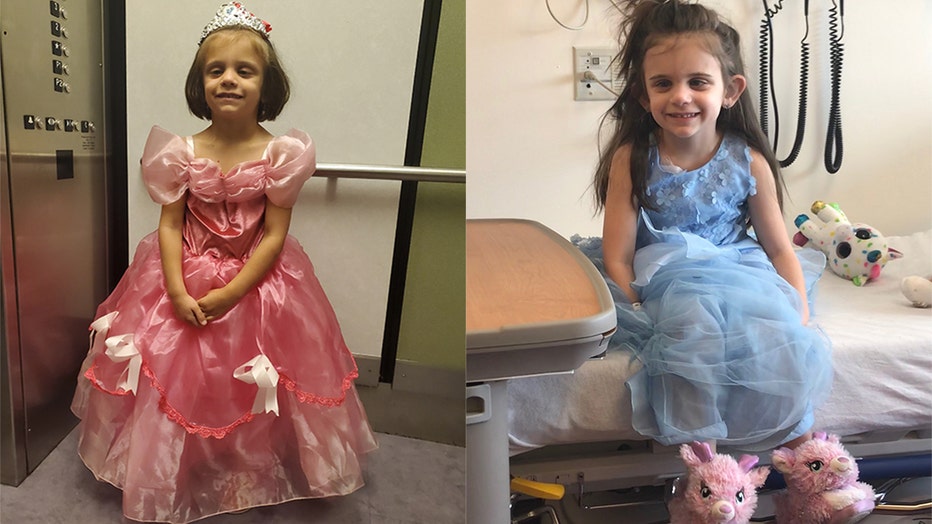 Lilli Durante, 5, who is undergoing chemotherapy, shows a “zest for life” and brings her “princess energy” to every appointment while wearing an elaborate gown each time. (Photo Courtesy: Courtney Durante)

Lilli has about 25-30 weekly chemo treatments left, which she will complete around February of next year.

“As a kid, being a 5-year-old, it’s hard to truly understand the magnitude of what’s she’s going through right now, and I think the gowns just help her to have something to look forward to. It gives her something exciting and something fun. It’s definitely something she loves as well. So I think it just helps her through the appointment,” Courtney said.

Courtney said her daughter “really, really enjoys it” and loves picking out her dresses.

She said Lilli likes the “big, poofy dresses, with lace, frills and sparkles,” and loves the one with pearls on it.

Dr. Jim Felker is an assistant professor in the pediatric neuro-oncology program at UPMC Children’s Hospital of Pittsburgh. He is in charge of Lilli’s treatment.

“The family was very concerned about what chemotherapy would be like and what the side effects could be, but Lilli had always been just having tons of fun whenever she came to our clinic,” Felker said. “Lilli is all girl. She loves dressing up every time she comes to clinic and she’s been that way since I first met her. And so despite the fact that her parents were apprehensive and anxious about her starting chemotherapy, Lilli didn’t have that same anxiety. She would just come to clinic with all her energy. All her princess energy,” Felker said.

Felker said Lilli started a tradition of wearing different princess dresses every time she went to the clinic.

“Since then, everybody looks out for her when she comes for her weekly appointments to see what exactly she’s wearing,” Felker said. “(We’re) all excited to see her this week.”

He said Lilli “comes in with an energy that is special.”

“Rather than make it a dreary appointment every time, or she’s sad and upset, it’s actually a bright spot in everyone’s day that she’s excited to be there. We’re excited to see her... see what she’s wearing next,” he said.

Felker said Lilli not only brightens the medical staff’s day, but also that of the other kids there for similar reasons.

“Lilli really is the inspiration for why I like doing what I do,” he said. “When you have girls like her who can go through this process with such a zest for life, it’s pretty inspirational.”