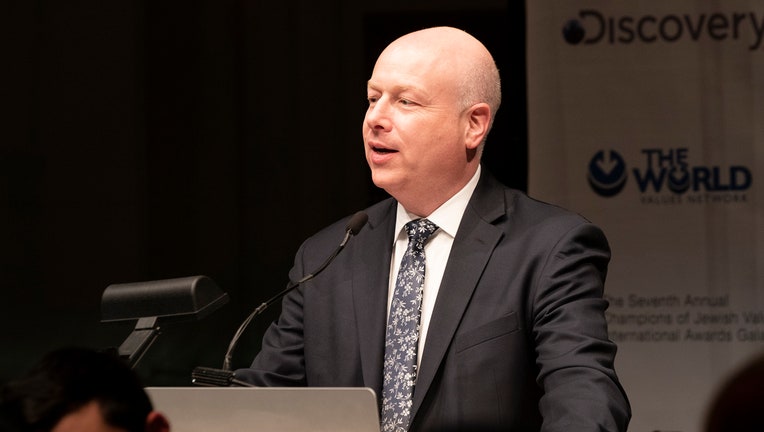 WASHINGTON - The Trump administration official tasked with developing a plan to bring peace between Israel and the Palestinians is leaving the White House.

Jason Greenblatt, Trump's special representative for international negotiations, will depart the administration in the coming weeks, the White House said Thursday. The former Trump Organization lawyer had been leading the effort to devise the oft-delayed peace plan. His departure casts further doubt on the proposal's future.

The White House says the peace plan is complete but will not be released until at least after this month's Israeli elections. The plan already is facing rejection by Palestinian officials, who object to strengthening ties between the U.S. and Israel.

In a tweet, President Donald Trump thanked Greenblatt for his service and said that Greenblatt's "dedication to Israel and to seeking peace between Israel and the Palestinians won't be forgotten." He said Greenblatt is pursuing work in the private sector.

Greenblatt worked in concert with White House senior adviser Jared Kushner, the president's son-in-law, on the plan. Kushner praised Greenblatt and said "work has helped develop the relationships between Israel and its neighbors as he is trusted and respected by all of the leaders throughout the region."

Greenblatt advocated for decisions to relocate the U.S. Embassy to Jerusalem and recognize Israeli sovereignty over the Golan Heights — moves that drew skepticism from Palestinians and Arab nations.

Apart from alienating the Palestinian leadership and securing the tacit support from some Gulf Arab states, the team's only visible accomplishment has been the release of an ambitious $50 billion economic proposal for the West Bank, Gaza and Palestinian communities in Egypt, Jordan and Lebanon.

That plan was rolled out a workshop in Bahrain this year that was boycotted by the Palestinian Authority. Despite the plan's lofty goals, no money for the projects it envisions has been secured.

Greenblatt had stepped up his public engagement before the announcement of the economic plan, but it was perhaps most notable for criticizing Palestinian leaders on Twitter for their rejection of the proposal and the as-yet unseen political portion of the peace plan.

In contrast to Democratic and Republican predecessors, the White House has stopped promoting a two-state solution between Israel and the Palestinians and avoided condemning Israeli settlement expansion on occupied lands.

The Jerusalem move, followed by cuts of hundreds of millions of dollars in aid, prompted the Palestinians to sever most ties with the U.S.

"He ruined the credibility of the United States and destroyed the peace process," Abu Rdeneh said.

The White House peace effort initially operated largely in isolation from the rest of the U.S. foreign policy apparatus. But as Greenblatt's departure has approached, the White House has begun integrating it with the State Department's Iran team.

Greenblatt's role is expected to be assumed by Kushner aide Avi Berkowitz and Brian Hook, the State Department's special representative for Iran.