President Trump&nbsp;on Tuesday floated&nbsp;the idea of temporarily doing away with the payroll tax in order to give the U.S. economy a boost as it struggles amid fears over the&nbsp;coronavirus&nbsp;outbreak.

WASHINGTON (FOX NEWS) - President Trump on Tuesday floated the idea of temporarily doing away with the payroll tax in order to give the U.S. economy a boost as it struggles amid fears over the coronavirus outbreak.

Trump proposed reducing the payroll tax for both employers and employees from 14.4 percent to zero during a lunch with Republican senators where the economic response to the coronavirus was the main subject of conversation.

The president first mentioned the idea of temporally halting the payroll tax on Monday during a news conference alongside the White House’s coronavirus task force. He also mentioned moves to aid small businesses and help hourly workers who might become sick.

“They’ll be very dramatic,” Trump said of the proposed economic measures during an evening briefing at the White House. “This blindsided the world and I think we handled it very well.”

CORONAVIRUS: WHAT YOU NEED TO KNOW

Treasury Secretary Steve Mnuchin and Director of the National Economic Council Larry Kudlow were on Capitol Hill to meet with Senate Republicans on Tuesday afternoon.

Still, there are mixed reactions from Republicans on Capitol Hill about the proposal of a payroll tax holiday. One source familiar with the proposal tells Fox News that addressing the payroll tax is “the fastest possible way” to address economic concerns. The source said that crafting proposals such as “unemployment insurance and dropping money out of helicopters takes months to engineer. But the payroll tax could hit immediately – especially if they include both employers and employees.

“(The payroll tax) helps in all red places but not all blue places,” said the source.

But there is reluctance among some Republicans is that it explodes the deficit.

Kudlow told reporters Friday that the administration is not looking at a “massive” federal relief plan. Rather, any federal aid package would be “timely and targeted and micro.” 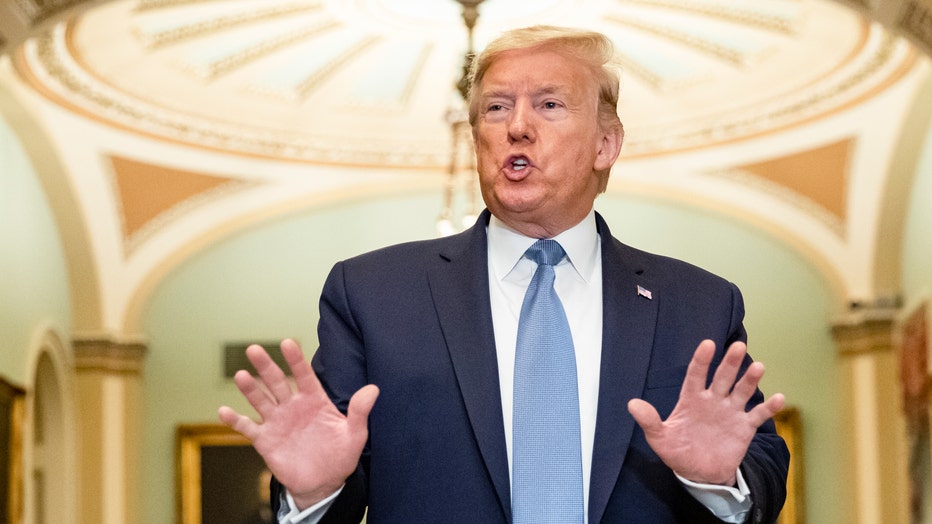 WASHINGTON, DC - MARCH 10: U.S. President Donald Trump talks to reporters at the Capitol after attending the Senate Republicans weekly policy luncheon on March 10, 2020 in Washington, DC. Trump said that lawmakers are focused on the spread of the cor

Lawmakers on Capitol Hill had barely started to contemplate the economic implications of the spread of the virus and what might be needed to stimulate the economy as people cancel vacations and business trips and stay away from stores. Senate Finance Committee Chairman Chuck Grassley, R-Iowa, told reporters that “everything’s on the table."

But members of the Senate Republican leadership, including Sen. John Cornyn, R-Texas, played down the need for an economic stimulus package of any kind, be it tax cuts or aid for workers. “It’s premature to be talking about that,” Cornyn told reporters. “I usually love tax cuts but I think it’s a little premature.”

Democrats have indicated they prefer other responses, such as passing legislation requiring employers to give their workers paid sick leave -- a longtime policy priority of Democrats -- and additional help for those with lower incomes.

The stock market appeared to rebound a day after falling to its lowest point since the 2008 financial crisis following the news of Trump’s meeting with Senate Republicans.

The S&P 500 surged as much as 3.7 percent in the morning, only to see those gains evaporate by midday. The index then bounced up and down before turning decisively higher following Trump’s meeting.

The moves reflected the mood of a market just as preoccupied with the virus as the rest of the world. Since U.S. stocks set their record high just a few weeks ago, traders have crossed over from dismissing the economic pain created by COVID-19 -- thinking it’s similar to the flu and could stay mostly contained in China -- to being in thrall to it, worrying that it may cause a worldwide recession.

The vast majority of people recover from the new virus. According to the World Health Organization, people with mild illness recover in about two weeks, while those with more severe illness may take three to six weeks to recover. In mainland China, where the virus first exploded, more than 80,000 people have been diagnosed and more than 58,000 have so far recovered.

But because the virus is new, experts can't say for sure how far it will ultimately spread. That has investors worried about the worst-case scenario for corporate profits and the economy, where factories and supply chains are shut around the world due to quarantines and people stay huddled at home instead of working or spending.

Fox News' Chad Pergram and The Associated Press contributed to this report.