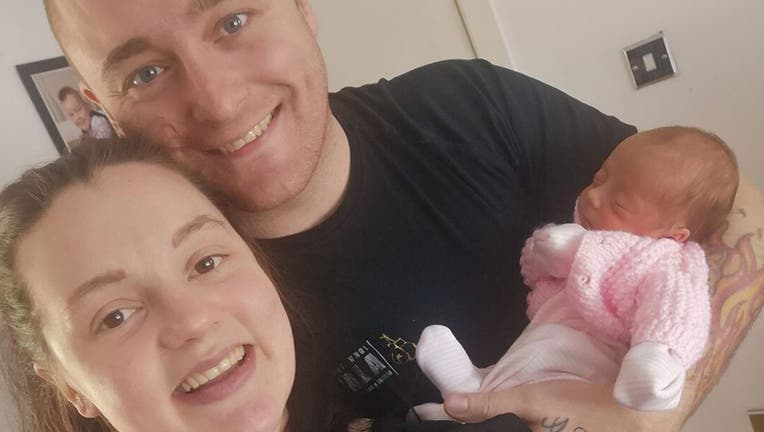 Baby Peyton with her parents. (Photo courtesy of NHS Lanarkshire)

FOX NEWS - An infant believed to be Scotland’s youngest coronavirus patient is on the mend after contracting the novel virus at just 3 weeks old.

The baby girl, Peyton, was born eight weeks premature to mom Tracy Maguire, 27, who suffered from pre-eclampsia, a pregnancy complication characterized by high blood pressure. If left untreated, it can prove to be serious — even fatal — for both mother and baby.

Peyton was delivered via C-section on March 26 and was subsequently placed in an incubator at University Hospital Wishaw, which is a part of NHS Lanarkshire. She weighed just 3lbs,11oz at birth.

On April 15, Maguire and her husband, AJ, were told Peyton had tested positive for COVID-19 “despite having none of the tell-tale symptoms of the condition,” according to a news release from NHS Lanarkshire. The young girl had reportedly only experienced a “sniffle,” but doctors chose to test her for both COVID-19 and other viruses.

“We were told we’d have to stay away from Peyton for 14 days and isolate at home but I pleaded not to be apart from my baby for that long. The staff kindly agreed I could isolate with her in the hospital while AJ stayed at home,” said Maguire, according to the hospital.

Thankfully, Peyton recovered after being treated with steroids to help strengthen her lungs, according to the BBC.

Following two negative coronavirus tests, Peyton was released from the hospital earlier this week, returning to the family’s home in Bellshill in North Lanarkshire. Maguire’s husband, AJ, was finally able to hold his daughter for the first time, according to the outlet.

“Only someone who has been in our position can understand the gratitude we feel towards the hospital staff,” the new mom said in a statement.