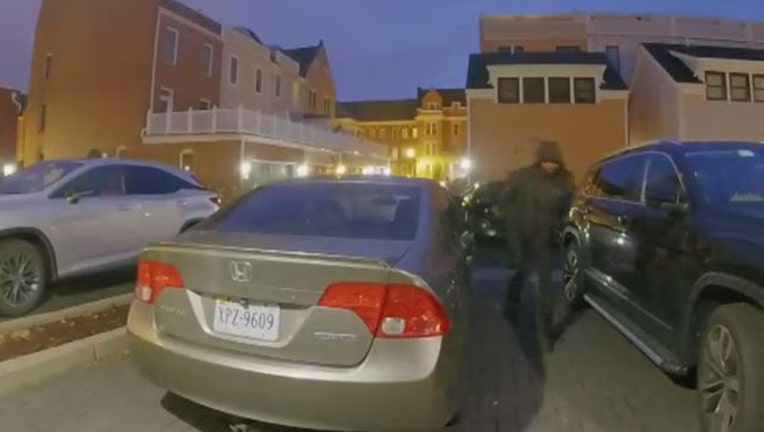 Surveillance footage of a suspect.

ALEXANDRIA, Va. - A pair of Christmas crooks has a Northern Virginia neighborhood on edge after a number of residents reported packages being stolen.

However, it’s the technique of these particular porch pirates that’s catching their attention.

According to neighbors living in the Potomac Yard townhomes off of Richmond Highway in Alexandria, this pair of package thieves followed behind a deliver driver and stole their boxes almost as soon as they were dropped off.

“It happens all the time, it’s always been, people are always losing packages,” Michael Whitehead, one neighbor, tells Fox 5.

The problem was particularly bad this week though.

Whitehead says he spotted the duo in a Dodge Charger around 6:30 Tuesday morning.

“I saw them come back along, throw something in the car, go to next door and pick a package up and throw that in the car," he said.

Whitehead snapped a photo of the vehicle and posted it to the Nextdoor app. He quickly discovered that his neighbors in the alley behind his townhouse were not the only victims.

Neighbors also spotted the daring duo around the corner on Richmond Highway and down the street on Annie Rose Avenue.

Doorbell video from the home on Richmond Highway captures the suspected scrooge snatching the package up close, while the driver waits in what appears to be the same black Charger.

Angry residents like Whitehead say they’re fed up with these gutsy grinches.  “Oh it’s just awful, isn’t it? I mean it really is. Why can’t they, you know, leave property alone?”

At least two residents have filed reports with Alexandria police, who tell Fox 5 they are investigating.

A pair of porch pirates has an Alexandria neighborhood on edge after a number of people reported packages stolen.