Several polls published since House Speaker Nancy Pelosi announced the start of an impeachment inquiry on Sept. 24 show a shift in views from earlier this year.

WASHINGTON - Americans are following impeachment proceedings closely and are slightly more likely to approve than disapprove of the inquiry itself. But the public is more closely split over whether President Donald Trump should be removed from office.

Several polls published since House Speaker Nancy Pelosi announced the start of an impeachment inquiry on Sept. 24 show a shift in views from earlier this year as the House of Representatives investigates whether Trump violated his oath of office in asking the government of Ukraine to investigate a political opponent.

A Fox News poll conducted Sunday through Tuesday found 51% of Americans now say Trump should be impeached and removed from office, up from 42% who said that in July.

Likewise, a Washington Post-Schar School survey conducted in early October shows 58% of Americans are supportive of the decision by Congress to initiate an inquiry, including 49% who say Congress was right to begin an investigation and should also take the next step to remove Trump from office. Earlier this year, Post-ABC polls found less than half saying Congress should begin impeachment proceedings.

And polls show that the shift was closely tied to Pelosi’s announcement of the inquiry. An early October poll from Quinnipiac University finds 45% of voters say Trump should be impeached and removed from office, up from 37% in a poll conducted immediately before that announcement. 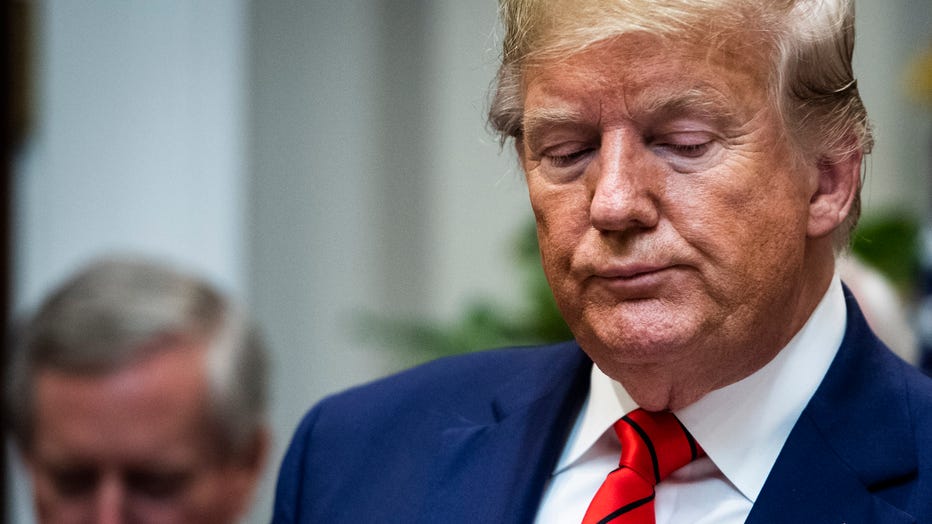 President Donald J. Trump speaks during a signing ceremony in the Roosevelt Room at the White House on Wednesday, Oct 09, 2019 in Washington, DC. (Photo by Jabin Botsford/The Washington Post via Getty Images)

Consistent (and polarized) views of Trump

Approval of Trump’s overall performance has remained steady, as it has over the course of his presidency. The Quinnipiac poll shows Trump’s approval rating standing at 40%, where it was in its poll conducted just before the inquiry began.

But, as with most political issues in today’s environment, views of the Republican president and impeachment are intensely polarized. A wide share of Democrats express support for impeachment, while the vast majority of Republicans stand opposed.

Today’s presidential impeachment inquiry is only the fourth in U.S. history, and polling demonstrates different scenarios for how opinion has changed as impeachment proceedings proceeded.

While opinions of President Bill Clinton and support for his removal from office moved slightly throughout 1998 and 1999, he emerged largely unscathed. According to polling by Gallup, support for Clinton’s removal reached no more than about a third of Americans throughout impeachment proceedings over Clinton’s handling of allegations of his extramarital affair with Monica Lewinsky, a White House intern. Before, during and after the impeachment process, Clinton’s job approval was much higher than that of Trump.

By comparison, approval ratings for President Richard Nixon took a severe hit as the public learned more about his transgressions, according to Gallup polling. At the same time, support for impeachment steadily grew.

Even so, far less than half supported Nixon’s removal from office throughout 1973 and into 1974; it wasn’t until after the House Judiciary Committee passed articles of impeachment in late July that more than half held that view.