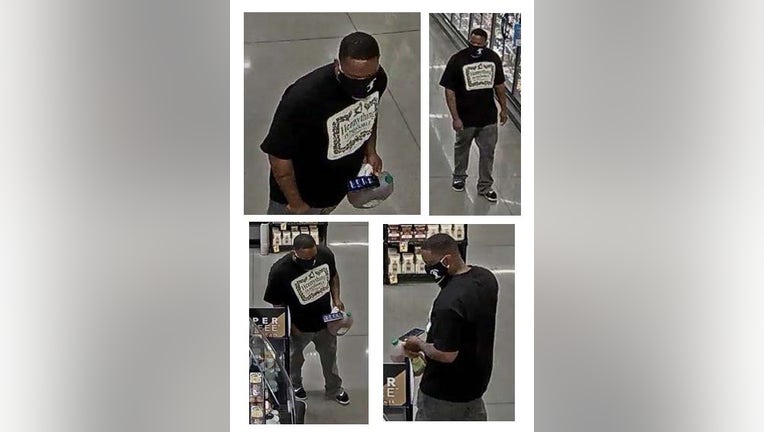 BALTIMORE COUNTY, Md. (FOX 5 DC) - Police say they are seeking the public's help in identifying a man who was caught on camera spraying an unknown substance on two different women who were shopping in two Baltimore County grocery stores earlier this month.

According to police, on September 8, a woman who was shopping at the Giant grocery store located in the 10200 block of Mill Run Circle told them she was approached by a man who claimed she had something on her pant leg. When touched, police say the substance made the woman feel dizzy.

Police say the man followed the woman out of the store, but when she made a scene because he was following her, he fled the area.

Video surveillance footage from the store shows the man spraying an unknown substance on the woman and following her throughout the store, according to police.

The next day, on Sept. 9, police say the man approached another woman at Wegmans, located in the 10100 block of Reisterstown Road, and pointed out an unknown substance on her pant leg. When touched, she also began to feel dizzy.

Police say the second woman reported the incident on Sept. 22 and investigators believe the same suspect is responsible for both incidents.

If you have been a victim of a similar incident or have any information, call 410-887-6975 and speak with detectives from the Franklin Precinct.