Video cameras recorded a small yellow plane flying above the Palm Beach resort on Wednesday, with a banner that read, "ha ha ha ha ha" being pulled behind it.

FBI agents executed a search warrant at the resort in Palm Beach on Monday as part of an investigation into whether Trump took classified records from the White House to his Florida residence, a move that represents a dramatic and unprecedented escalation of law enforcement scrutiny of the former president.

Trump, who disclosed the search in a lengthy statement, asserted that agents had opened up a safe at his home and described their work as an "unannounced raid" that he likened to "prosecutorial misconduct." 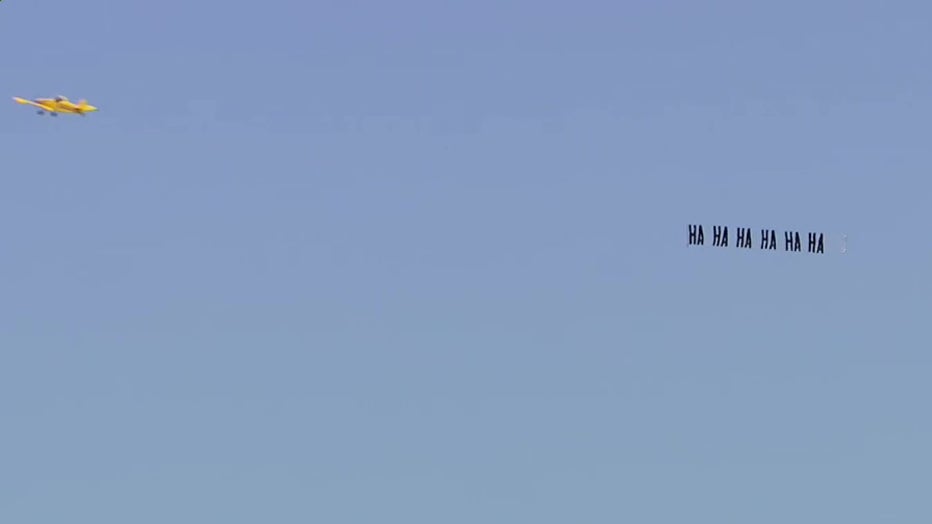 "These are dark times for our Nation, as my beautiful home, Mar-A-Lago in Palm Beach, Florida, is currently under siege, raided, and occupied by a large group of FBI agents," Trump wrote. "Nothing like this has ever happened to a President of the United States before."

He continued, "After working and cooperating with the relevant Government agencies, this unannounced raid on my home was not necessary or appropriate."

The search intensifies the months-long probe into how classified documents ended up in more than a dozen boxes located at Mar-a-Lago earlier this year. It occurs amid a separate grand jury investigation into efforts to overturn the results of the 2020 presidential election and adds to the potential legal peril for Trump as he lays the groundwork for another run.

There are multiple federal laws governing the handling of classified records and sensitive government documents, including statutes that make it a crime to remove such material and retain it at an unauthorized location. Though a search warrant does not suggest that criminal charges are near or even expected, federal officials looking to obtain one must first demonstrate to a judge that they have probable cause that a crime occurred.

The FBI raided the Mar-a-Lago Resort in Palm Beach County on Monday. Officials said agents were looking for any potentially classified documents that former President Trump may have taken from the White House during his tenure. This all comes as Trump faces legal issues on multiple fronts.

Two people familiar with the matter, who spoke on condition of anonymity to discuss an ongoing investigation, said the search happened earlier Monday and was related to the records probe. Agents were also looking to see if Trump had additional presidential records or any classified documents at the estate.

Trump has previously maintained that presidential records were turned over "in an ordinary and routine process." His son Eric said on Fox News on Monday night that he had spent the day with his father and that the search happened because "the National Archives wanted to corroborate whether or not Donald Trump had any documents in his possession."

Asked how the documents ended up at Mar-a-Lago, Eric Trump said the boxes were among items that got moved out of the White House during "six hours" on Inauguration Day, as the Bidens prepared to move into the building.

As the federal investigation into former President Trump continues, reactions are pouring in across the country, including here in the Sunshine State. The governor, the candidates running against him, and Florida lawmakers are all weighing in.

"My father always kept press clippings," Eric Trump said. "He had boxes, when he moved out of the White House."

Florida Gov. Ron DeSantis, a Republican who is considered a potential 2024 presidential candidate, said in a statement on Twitter that it was "an escalation in the weaponization" of U.S. government agencies. Kevin McCarthy, the House Minority Leader, said in a tweet that the Justice Department "has reached an intolerable state of weaponized politicization" and said that if Republicans win control of the U.S. House, they will investigate the department.