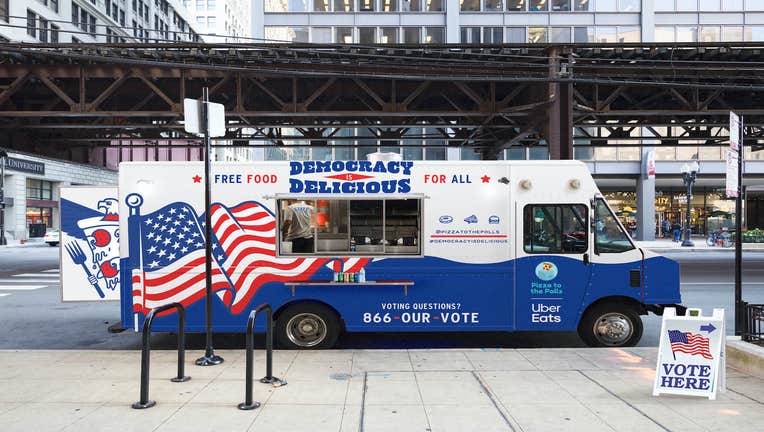 Pizza to the Polls truck.

As long lines form outside polling locations ahead of the presidential election, Pizza to the Polls wants to keep the bellies of voters full as they wait to cast their ballots.

Pizza to the Polls is partnering with Uber Eats and local restaurant such as Milk Bar and Shake Shack to launch trucks in 25 different cities to deliver treats, not just pizza, to polling locations.

RELATED: Extremely long lines at the polls: One woman says she waited close to 10 hours

“By launching food trucks in cities with a history of long lines, we plan to safely provide free, individually wrapped snacks and beverages to everyone,” according to the website.

The company has a running list of places where pizza was successfully delivered to polling locations as well as dates for when the services will be available in select cities.

According to data collected by the United States Election Project, a total of 27.9 million people have cast their votes early as of Oct. 18, continuing to steamroll the number of early votes four years ago, which was only at 5.9 million.

With record numbers of early votes, comes long lines. Top that with an ongoing COVID-19 pandemic, some people are waiting upwards of 8 hours in a few states to cast their ballots early.

How to cast your 2020 ballot without using USPS

Here are some options for those who find themselves wary of the U.S. Postal Service’s ability to deliver their ballot on time.

States such as Florida, whose early voting started just days ago, are experiencing painfully long lines as voters attempt to get their ballots turned in, with some people waiting over three hours.

Georgia also saw record early voter turnout at polling locations, with more than 40 percent above the first day of early voting in 2016's November election. Some voters waited almost 10 hours to cast their ballots and the state saw record voter registration as of October.

States such as Minnesota, South Dakota, Wisconsin, Vermont, Virginia and Florida have already reached 20% or greater turnout than their 2016 total vote turnout, according to the U.S. Election Project.