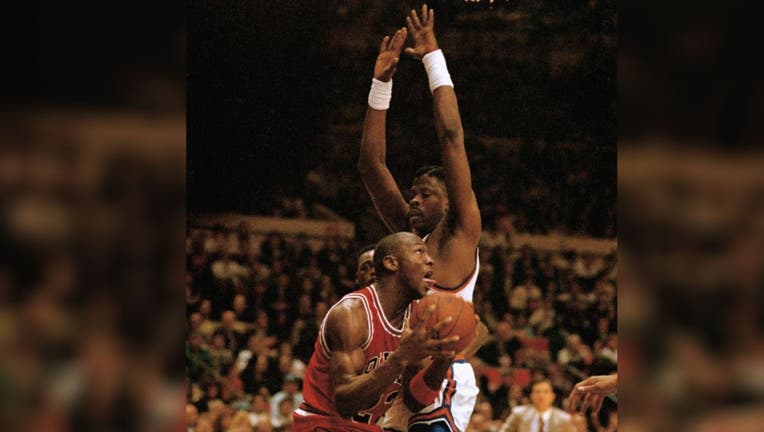 Patrick Ewing of the New York Knicks plays Michael Jordan close as the Bulls' superstar drives for the basket during their NBA playoff game 5/11. The Knicks held Jordan to 15 points and went on to win 114-97. (Getty Images)

WASHINGTON - The Chicago Bulls and New York Knicks rivalry was featured in the latest episodes of “The Last Dance” but a main player in the rivalry isn’t keeping up with too much of the documentary.

Georgetown legend and coach Patrick Ewing was one of the best centers in basketball from the mid-1980s to the late 1990s but had a hard time getting past Michael Jordan’s Bulls. Because of that, Ewing hasn’t been consuming the documentary as much as the average NBA fan.

“I had to live through all of the battles that we had to go through, and now you all have a documentary that you have to keep rubbing it in my face,” Ewing said on “The Dan Patrick Show” on Tuesday.

Ewing and the Knicks were able to get past the Bulls only once in the mid-1990s in the NBA Playoffs and that was in 1994 when Jordan was taking a break from basketball to play baseball. The Knicks made the NBA Finals that season – only to lose in seven games to the Houston Rockets.

Ewing added that he started to watch “some of it” but turned it off to do something else.

“I watch a little, then I shut it off and go do other things. I lived through it, so I don’t need to watch it. I know he’s great,” he said.

Ewing played 15 seasons in New York before moving on to play with the Seattle Supersonics and the Orlando Magic. He was an 11-time All-Star and seven-time All-NBA First Team. He was inducted into the Basketball Hall of Fame and is currently the head coach of the Georgetown men’s basketball team. He never won an NBA championship.

For an insider's perspective on "The Last Dance," check out Fox Nation's new show, "Guarding Jordan," where former NBA star and coach Jeff Hornacek reflects on going head-to-head against the NBA superstar.

In the Fox News show, his daughter and Fox Nation host Abby Hornacek watches the Jordan documentary with her dad and gets his unique take on the ESPN series.

Hornacek said Jordan's "ruthlessness" truly set him apart from other incredibly talented players in the league.

"I would probably guess that there's never been a pickup game that he's lost because it didn't matter if it was practice or a game, he was playing it full out," he said. "He hated to lose. And I think those traits are what made him the super superstar that he was."

To watch all of "Guarding Jordan with Jeff and Abby Hornacek" – and to see what Abby found in her dad's collection from his playing days – go to Fox Nation and sign up today.