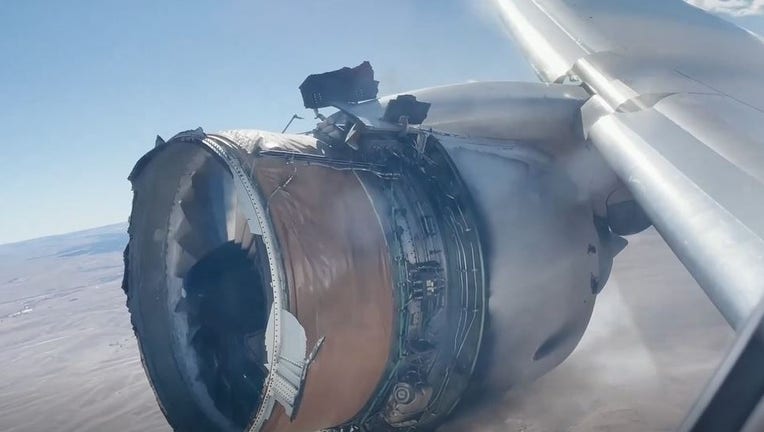 The Hawaii-bound jet was a Boeing 777 with 10 crew members and 231 passengers on board, according to reports.

Frightening video recorded from inside the plane showed the damaged engine on fire.

After hearing an explosion and seeing a flash of light, Delucia said he quickly stuffed his wallet in his pocket, thinking it would help responders identify his body more easily if he did not survive, he told the AP.

Much of the debris landed in Commons Park and in the Northmoor and Red Leaf neighborhoods of Broomfield, which is about 20 miles north of downtown Denver.

Miraculously, no injuries were reported on board the aircraft or on the ground.

The damaged engine caused the plane to lose altitude, with a trail of black smoke visiible to people on the ground, the AP reported.

The National Transportation Safety Board is investigating the incident and has asked Coloradans not to touch debris if they find pieces of the plane in their neighborhoods.

Transportation Secretary Pete Buttigieg told MSNBC that he will work with the NTSB to investigate the engine failure to "understand any lessons learned in a way that will maximize the sense of safety every time we get on a plane."

"America's reputation for excellent air safety is not something that just happened," Buttigieg told MSNBC. "It happened because of close regulation of understanding whenever an incident happens, why it happens and ensuring that we have the highest standards in this country."

Colorado resident Clare Armstrong told Fox News she was at the Broomfield Commons Dog Park when she heard a loud boom in the sky and saw debris start falling in the area.

She and others in the dog park were able to safely get to shelter.

Broomfield police said they are "beyond grateful" that no one was injured, given how many people are normally at the park on a weekend day.

It was currently unclear what caused engine No. 2 on the aircraft to malfunction. A video taken from the ground shows a large plume of black smoke emitted from the plane.

Jon Ostrower, editor-in-chief of Air Currents, explained on Twitter that "whatever befell this engine had tremendous energy involved given the near-total disintegration of the nacelle."

United Airlines said all passengers and crew were transported back to the terminal in Denver and would be offered a new flight to Honolulu in the coming hours.