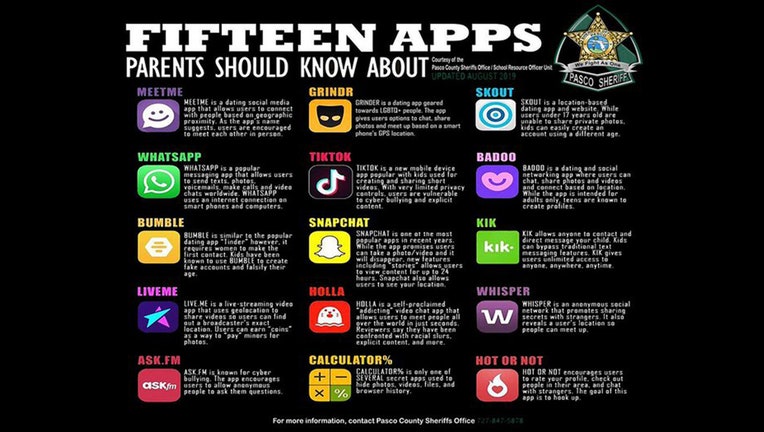 NEW PORT RICHEY, Fla. - With summer break over and classes beginning across the state -- which includes online learning -- the Pasco County Sheriff's Office released a list of 15 apps, they say, parents should know about.

It's a list similar that has been released by the Sarasota County Sheriff's Office in the past, but this year, the risk of predatory only encounters have increased as the COVID-19 pandemic wears on, experts said, adding that the extra screen time can put kids at a greater risk of being contacted by sex predators.

"It’s important to know what your kids are doing online and we want to help keep parents informed! Our School Resources Officers put together a list of 15 apps parents should know about!" the sheriff's office shared Tuesday on Twitter.

The sheriff's office named the following 15 apps parents should lookout for:

Meetme: It's a dating social media app that allows users to connect with people based on geographic proximity. The app's users are encouraged to meet each other in person.

Grindr: This dating app is geared toward gay, bi and transgender people. It gives users options to chat, share photos and meet up based on a smart phone's GPS.

Skout: It's a location-based dating app. While users under 17 years old are unable to share private photos, kids can easily create an account with an older age.

Whatsapp: This is a popular messaging app that allows users to send texts, photos, voicemails, as well as make calls and video chats.

Badoo: This is a dating and social networking app where users can chat, share photos and videos based on location. The app is intended for adults only, but teens are known to create profiles.

Bumble: It's similar to the popular dating app, Tinder, however, it requires women to make the first contact. Kids have been known to use Bumble to create fake accounts and falsify their age.

Snapchat: It's one of the most popular apps of 2018. While the app promises users can send a photo or video and it will disappear, recent features allow users to view content for up to 24 hours. Snapchat also allows users to see your location.

LiveMe: This live-streaming video app uses geolocation to share videos so users can find out a broadcaster's exact location. Users can earn coins within the app and use them as a way to pay minors for photos.

Holla: The app's makers admit it's an "addicting" video chat app. It allows users to meet people all over the world in just seconds. Reviewers say they have been confronted with racial slurs, explicit content, and more.

Whisper: This is an anonymous social network that promotes sharing secrets with strangers. It also reveals a user's location so people can meet up.

Ask.fm: This app has become known for cyberbullying. The app encourages users to allow people to anonymously ask them questions.

Calculator%: This is one of several secret apps used to hide photos, videos, files, and browser history.

Hot or Not: This app encourages users to rate other users' profiles, with the focus on physical appearance. It also allows users to check out people in their area and chat with strangers. The sheriff says the goal of this app is to "hook up."

For many students, Friday marks the last day of school. Now, summer break begins and kids will likely be spending more time indoors than normal, and that means more screen time. Officials are urging parents to be mindful of what their children are doing online.

In April, Selah Freedom, a Sarasota-based sex trafficking-prevention organization, released video warning of the dangers that children face when they use a phone or tablet.

As students spend more time at home, they're also spending more time on gaming apps and social media platforms where they can connect with people, the non-profit organization explained, allowing exploiters and predators even more access than ever to young people.

Selah Freedom’s website cites a statistic that one out of nine children are approached by a predator online. The organization also provides resources for parents on their website.