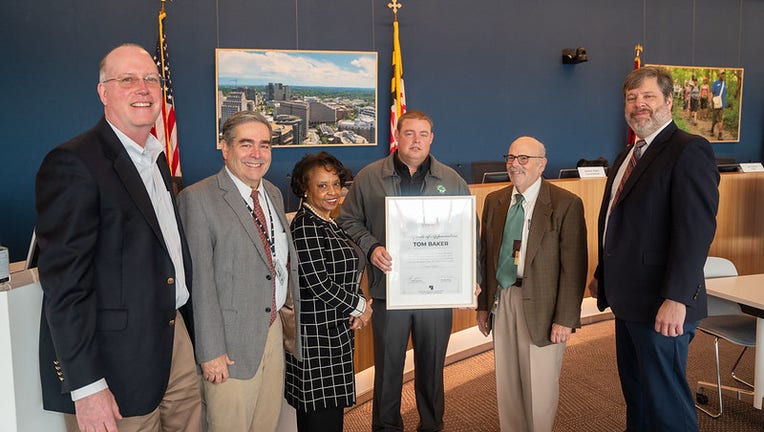 Tom Baker was dispatched to the scene the evening of the crash and put in charge of communication with the pilot. He was tasked with keeping him calm and informed during recovery efforts, which lasted seven hours.

Baker also relayed information from the pilot to responders on the ground facilitating the rescue.

"This went on for approximately seven hours until they were rescued," said Baker, "I was relaying information about their status to the medical command officer so he could keep the paramedics informed. In all my 27 active years as a volunteer, I have never responded to such a call. This is in fact a once in a lifetime incident."

During an intimate ceremony Thursday, he was presented with a certificate of appreciation, signed by Montgomery Parks Director Mike Riley and Interim Montgomery Planning Board Chair Jeffrey Zyontz, which read:

"In appreciation for your professionalism, commitment, support, dedication and service to Montgomery County residents during the November 28, 2022, plane crash."

The National Transportation Safety Board has released its preliminary report on the small plane that crashed into power lines in the Gaithersburg area of Montgomery County last month - and it appears to place some blame for the crash on the pilot.

"Our employees demonstrate their dedication to serving Montgomery County residents every day, but Mr. Baker’s actions clearly go above and beyond," said Mike Riley, director of Montgomery Parks. "We are very proud of his courageous efforts, which ultimately helped prevent a tragedy."

Baker has worked for Montgomery Parks for over 18 years and manages 29 parks in the Rock Creek region of the county. In addition to his role at the parks department, Baker is a volunteer deputy fire chief with Laytonsville District Volunteer Fire Department.