A D.C. police officer on his way home from work used his training, a crowbar and a police radio to save a man's life.

MONTGOMERY COUNTY, Md. (FOX 5 DC) - A D.C. police officer on his way home from work used his training, a crowbar and a police radio to save a man's life.

Officials in Montgomery County say just after 11 p.m. Wednesday they received a report of a pickup truck that had left the road on the Northbound 270 spur just before Democracy Boulevard.

Officer Reinaldo Otero, whose police radio has the capability to communicate with other jurisdictions, switched to one of the Montgomery County Police channels and reported he had come upon the wreck.

A few minutes later, Officer Otero, who is assigned to the Third Police District as a property clerk, radioed the truck was on fire.

"Call the fire department," the officer said. "I have fire coming out of the car -- there has to be someone in there".

After he was told help was on the way Officer Otero radioed again.

"I have one male severely injured he is out of the car, the vehicle is on fire, be advised I need more units.... he is conscious and breathing he has a broken leg, possibly ribs and difficulty breathing," he said. 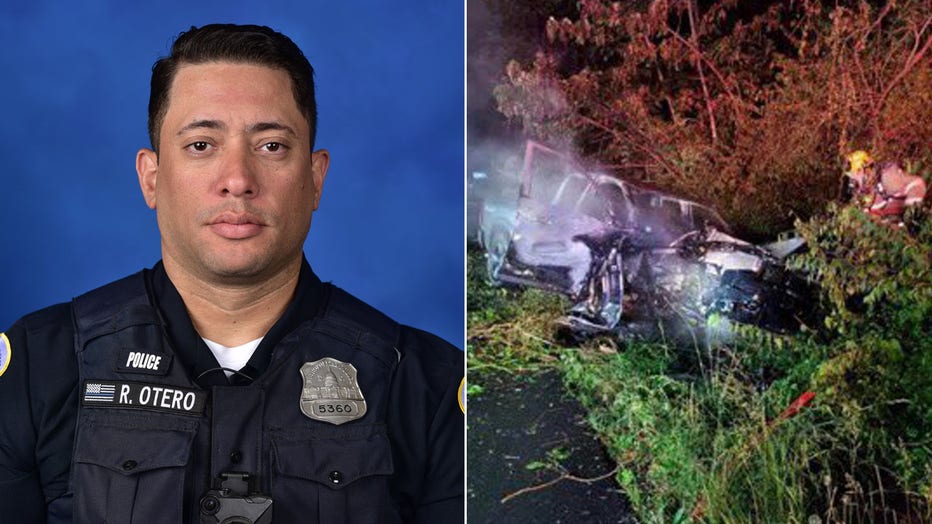 According to an interview with D.C. police and shared with reporters, Officer Otero grabbed a crowbar from his truck and ran to the wrecked 2019 Dodge Ram. He smashed a window and tried to feel around inside and that's when he heard someone shouting help me!

Officer Otero says another driver who had also stopped to help then assisted him in giving first aid.

The unidentified driver, described as a man in his early twenties, was taken from the scene in critical condition.

He had been reported missing and suicidal by his parents earlier in the evening.

Police had been looking for him when they realized the driver of the pickup was the man they were trying to find.

Officer Otero, in the interview with police, said over the years he has stopped on the highway at least four other times to assist with accidents.