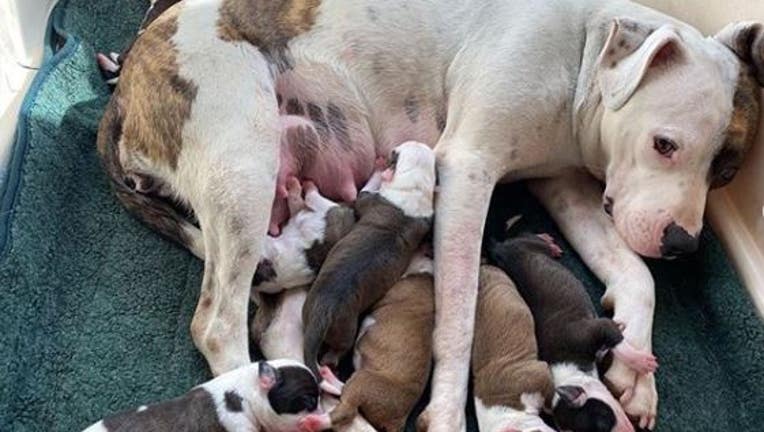 "They're all healthy and so darling," Rocket Dog Recsuce founder and animal activist Pali Boucher said Monday. "She is just the best mom."

The saga began for Rocket Dog  Rescue volunteers on Jan. 10. That's when the nonprofit group received a text, not unlike any other, from a person who spotted a stray pit bull with no collar, dirty and scared, running around Enterprise Avenue and Edes Way in Oakland. An animal control worker tried to recuse her, but Boucher said she just ran off. People saw her running around the roadway, almost getting hit by cars on several occasions. "Trucks were just bombing through," Boucher said.

Rocket Dog Rescue volunteers decided to pitch in. “For over three weeks, we took shifts going by to build up trust by laying on the grass and feeding her lil (sic) fast food nuggets,” the group wrote on Instagram.

Every day her belly was growing bigger.

Volunteers devised a plan to lure her into a parking lot and close the gate door to get her into a crate. She ran for her first hiding hole, but volunteers were waiting to  put a leash over her head. "It happened all so seamlessly," Boucher said.

Boucher is now caring for all the dogs herself, and hopes to adopt them in about 10 weeks.

In 2001, she founded Rocket Dog Rescue, a donation-driven, noprofit group dedicated to saving homeless and abandoned animals from euthanasia in overcrowded Bay Area shelters.  Volunteers help to place non-aggressive dogs into temporary foster homes where they are socialized, spay/neutered, vaccinated, and treated for any medical or behavioral conditions which would otherwise limit their adoptability. The group then says members actively seek out permanent quality through its  volunteer network, online adoption page, weekend adoption fairs, and neighborhood poster campaigns.