Friday kicked off the beach-season weather our region is expecting to see stretch into the weekend, but that doesn’t mean all beach towns have fully reopened, North Beach’s Mayor tells FOX 5.&nbsp;

NORTH BEACH, Md. (FOX 5 DC) - Friday kicked off the beach-season weather our region is expecting to see stretch into the weekend, but that doesn’t mean all beach towns have fully reopened, North Beach’s Mayor tells FOX 5.

North Beach is a small beach community on the Chesapeake Bay, which is still partially closed-off to the public – something Mayor Michael Benton says he’s been getting lots of angry calls over.

“Why aren’t you open like Ocean City?” Benton said, describing the calls.

“We’re trying to be as safe as possible,” said North Beach’s Mayor, “We’re surrounded by a lot of hot pockets right now. I mean we’re around a lot of communities – counties that haven’t even opened up and are not going to open up until June. We don't want to restrict everyone that comes here. What we were trying to do is make a safe environment for everybody.”

Mayor Benton told FOX 5 he and the North Beach Council decided to only reopen the boardwalk, bike lanes, bathrooms, the Third Street Park and pier (although the pier is closed-off to fishing). That fishing area, other parks and the beach are still closed-off to residents and visitors. The mayor also said they’re asking people not to tailgate or set-up folding chairs on the boardwalk. 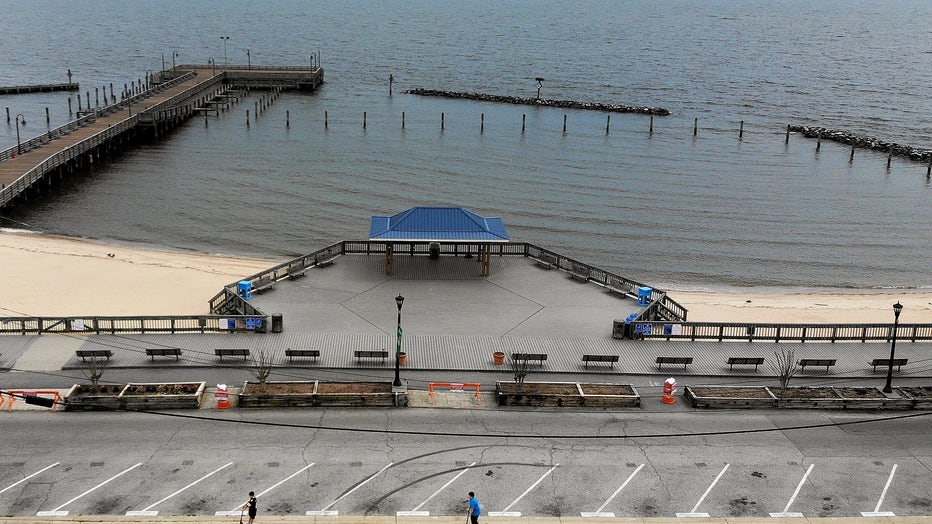 NORTH BEACH, MD - APRIL 07: Two boys ride scooters along the sidewalk as the boardwalk and pier remain closed, on April 7, 2020 in North Beach, Maryland. Public beaches and parks along the Chesapeake Bay have been closed to the public as people were

Keith Miller’s mother was sitting under the boardwalk pavilion with a folding chair enjoying the breeze when she was asked to remove the chair.

“Yeah, it’s frustrating but I understand,” said Miller, “I want to keep her safe. Keep myself safe. My goal was to just give her some shade but they said she can’t sit there. So. We’re going to comply. We got to be in this and stick together.”

A group of mothers strolled by with their children, taking a midday walk.

“Things have to open back up. You know. You can’t stay isolated forever. You just have to take your precautions and hope for the best,” said one of the mothers, Kelly Williams.

“Walking like this is fine. I wouldn’t go to a bar on St. Patrick’s Day,” said Stueckler. His clients told FOX 5 it’ll be a bit longer before they feel safe enough to visit more restaurants and stores.

While the beach is still closed, North Beach is reopening retail shops Friday, in accordance with Governor Larry Hogan’s “Roadmap to Recovery Plan.”

Because the governor has given local jurisdictions dealing with greater COVID-19 cases more leeway on when to reopen, there’s been some confusion over which areas are doing what.

Mayor Benton told FOX 5 North Beach and Chesapeake Beach are trying to work in concert with one another on reopening plans.

“We’re not Ocean City. We’re not Delaware. We’re not Virginia. Our beaches, if you pan me, you can see all of it behind me. We’re very tiny. And it’s our responsibility to continue to err on safety for everybody: that’s our residents, our staff and our guests,” said Benton.

On Friday, some knew the beaches were closed but still came in a bathing suit, including the mother of a two-year-old, named Aubry Alvarez.

“I read in the news that we would be able to do a little bit more like walking on the boardwalk,” said Alvarez. “So when I told [my daughter], she was like, ‘But everybody’s sick?’ … It made me realize I have to at least show her some normalcy.”

Town leaders are keeping a close eye on how things go this weekend, which will help determine whether they decide to reopen the beaches sooner than later.