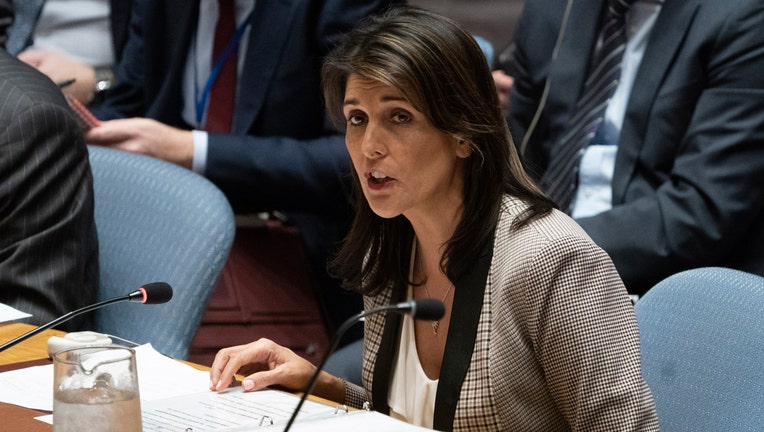 US Ambassador to the UN Nikki Haley addresses the UNSC during a United Nations Security Council meeting on Ukraine November 26, 2018 at the United Nations in New York

WASHINGTON - Former U.S. Ambassador to the U.N. Nikki Haley blasted former Secretary of State Rex Tillerson and former White House Chief of Staff John Kelly, recalling a private conversation where they defended resisting President Trump, telling her they did so out of necessity.

Haley told "CBS Evening News" anchor Norah O’Donnell that she did not appreciate having the former officials confide in her, as she described in her new book, “With All Due Respect.”

Haley, however, was not impressed.

“It should've been, 'Go tell the president what your differences are, and quit if you don't like what he's doing,'” Haley told O’Donnell. “But to undermine a president is really a very dangerous thing. And it goes against the Constitution, and it goes against what the American people want. And it was offensive."

CBS asked both former officials for a response, to which Kelly replied, “If by resistance and stalling she means putting a staff process in place … to ensure the (president) knew all the pros and cons of what policy decision he might be contemplating so he could make an informed decision, then guilty as charged.”

Haley also defended President Trump when it comes to the ongoing impeachment inquiry over suspicion that Trump tried to pressure Ukraine into investigating political rivals by withholding aid.

“You're gonna impeach a president for asking for a favor that didn't happen and giving money and it wasn't withheld? I don't know what you would impeach him on,” Haley said. She later added, "The Ukrainians never did the investigation. And the president released the funds. I mean, when you look at those, there's just nothing impeachable there.”