After we first reported on a delay in getting an ambulance to the scene of a fatal bicycle crash in Northeast DC, community members are demanding answers as well as changes to an intersection they say is clearly dangerous.

WASHINGTON (FOX 5 DC) - Dozens of neighbors and activists called for changes to the Brookland intersection where a work shuttle struck and killed a cyclist last week.

The family of 47-year-old Armando Martinez-Ramos spoke to a crowd which then temporarily blocked the Michigan Avenue bridge at 10th Street Northeast.

A memorial is affixed the barrier wall near the crosswalk where Martinez-Ramos was struck. A white bicycle also marks the spot.

On Wednesday, D.C. officials admitted that the initial emergency call was notated improperly, which FOX 5 previously reported led to a five-minute delay in dispatching an ambulance to help Martinez-Ramos. 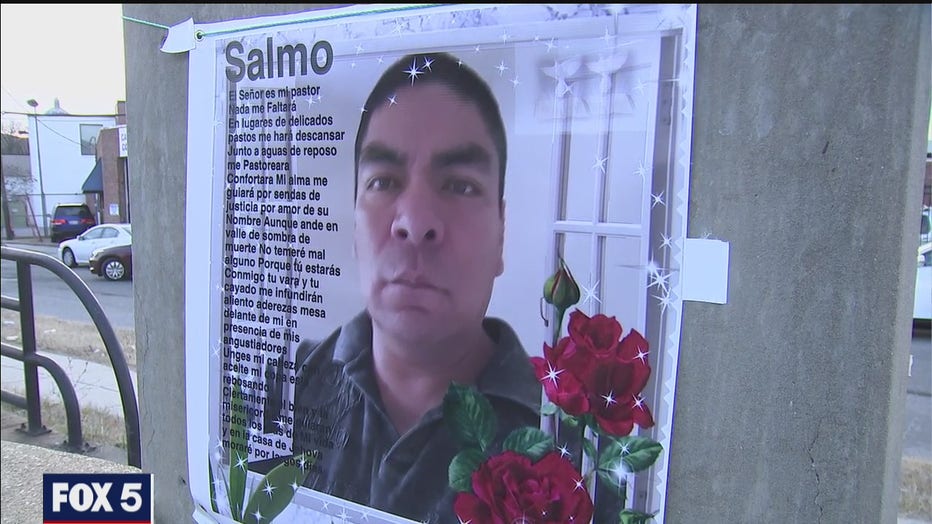 The Office of Unified Communications, which serves as D.C.'s 911 call center, said in a statement:

"At the Office of Unified Communications, we continue to look for opportunities to improve our operations and when mistakes are made, the agency is committed to taking the necessary steps to learn and improve. Presently, we are working with FEMS to streamline event types and response plans to better enable our personnel to identify and dispatch proper responses. While this incident is still under review by the agency, personnel involved in this delayed dispatch will be subject to corrective action. The Office of Unified Communications remains firmly committed to serving District residents and fulfilling its critical role in coordinating the most appropriate responses to all the city's 911 calls."

"He was very happy to start his new job. Unfortunately, it was his first trip and then he got killed by the truck," Martinez-Ramos said.

Armando Martinez-Ramos leaves behind a spouse and three children.

Neighbors called for speed or red light cameras at the intersection.

"Speed cameras don't have an immediate deterrent effect, but they have a quickly punitive effect on people who are racing through the intersection," said neighbor Michael Zwirn.