The World Series champion Washington Nationals were honored at the White House on Monday.

WASHINGTON (FOX 5 DC) - The World Series champion Washington Nationals were honored at the White House on Monday – but a number of players refrained from attending the event.

Prior to Monday’s ceremony, only reliever Sean Doolittle had publicly stated that he would not attend the traditional event hosted by President Donald Trump.

However, a number of players’ names were not on the official list of attendees during the ceremony, including:

Doolittle told local media he wanted to celebrate with his teammates but he “just can’t.”

Baby shark at the White House

The Washington Nationals are introduced at the White House to the tune of Baby Shark.

In fact, 18 of the 25 players on the Nationals' World Series roster were in attendance, according to the Associated Press.

Mark Lerner, the team's principal owner, was the only member of the ownership group who was listed as attending. 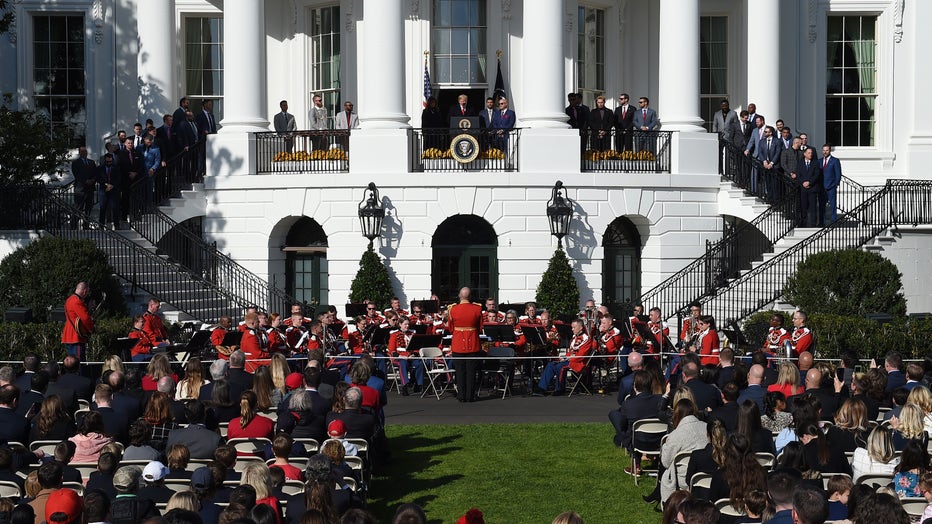 President Donald Trump welcomes the 2019 World Series Champions, the Washington Nationals on the South Lawn of the White House in Washington on Nov. 4, 2019. (Photo by Olivier Douliery/AFP via Getty Images)

During the ceremony, catcher Kurt Suzuki donned a "Make America Great Again" hat, and first baseman Ryan Zimmerman thanked Trump for keeping the country safe and making it the greatest on earth before presenting Trump with a No. 45 Nationals jersey.