More than 700 Montgomery Blair High School students stayed home on Monday out of concern for a possible school threat, prompting police to issue a warning to parents and students on teenage social media use. County leaders say they have been dealing with an uptick in threats.

MONTGOMERY COUNTY, Md. - A Montgomery County Public Schools Spokesperson tells FOX 5 more than 700 Montgomery Blair High School students stayed home on Monday out of concern for a possible school threat, prompting police to issue a warning to parents and students on teenage social media use. County leaders say they have been dealing with an uptick in threats.

One of the most recent of these cases included a post to the app called, “TELLONYM,” where a student voiced frustrations over bullying.

“I’m tired of these people at Blair constantly harassing and hurting me,” the post read, “I am reaching my breaking point, and I will soon do something I know I will regret later on. Please stop passively bullying students, before I end your [expletive] lives.” A second post actually names the school. 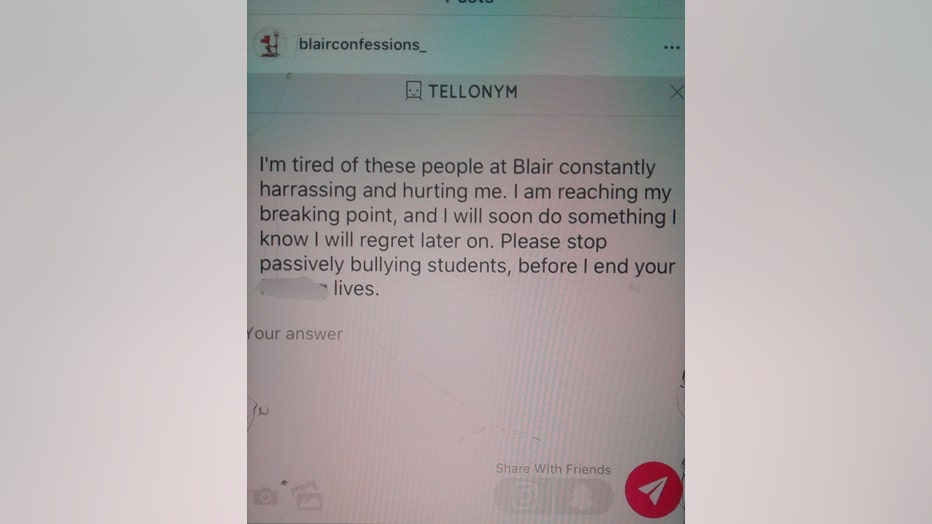 FOX 5 was told the message was shared to a private Instagram group called, blairconfessions_. A parent who saw the message, reported it to the school administration on Sunday, according to MCPS Spokeswoman Gboyinde Onijala.

By Monday, Montgomery County Police determined the threat to be unfounded. MCPS says the student involved admitted to the post. However fears of the potential threat still prompted close to a quarter of Montgomery Blair’s student population to stay home. Montgomery Blair senior Sarthak Bhatnagar told FOX 5 he was one of those students.

“My parents had concerns with just personal safety, just given the nature of the threat. Even though there was a chance, or a high percent chance it was just a hoax, they just want to be safe,” said Bhatnagar.

At the school to pick up her daughter on Tuesday, Montgomery Blair parent AJ Campbell voiced her frustration with MCPS. “On the bullying harassment. They need to stop it. They need to take it seriously. They need to believe the victims and I’m not sure they do,” Campbell said.

Roman Holton sounded more supportive of the school system. “I think it’s a lot of angry kids or mad kids or you know social media has just brought us to this point that these kids like to be on everything of social media that’s on your mind without really thinking about it,” said Holton, “And you know if they are real, I think you have to leave it in the hands of the administration and the police department. I think they’re doing a good job.”

“Whether it’s an image with very few words or an actual statement saying that I’m going to shoot up the school, that’s something that we’re not going to take lightly,” said Onijala, who also said posts done as a prank will get the same treatment.

Montgomery County Police wrote in a news release, “Charges may vary, but threats to schools can include the following: Education Article 26-101-Disorderly Conduct/Disruption of School Activities, Criminal Law 3-1001-Threat of Mass Violence and Criminal Law 6-107(a)(2)-Threat of Arson/Destructive devices.”

“Just monitor your kids on social media accounts. Have a conversation with kids that if they are in paint, if they have emotional issues or there’s bulling going on in school, that the social media outlet is not the way to go,” said Capt. Thomas Jordan of the Montgomery County Police Department.