A highly contagious coronavirus variant first detected in the U.K. is spreading rapidly across the United States, doubling roughly every 10 days, according to new research. The findings support a forecast published last month by the U.S. Centers for Disease Control and Prevention that warned of the variant becoming dominant in the country by March.

Researchers of the new study echoed the CDC’s prediction of the virus variant, known as B.1.1.7, and warned of a surge of potential new cases and deaths without "immediate and decisive action."

The researchers estimated that the transmission rate of B.1.1.7 in the U.S. has been 35 - 45% higher than that of other strains and found it had doubled in frequency about every week and a half.

The new study, posted Sunday on the preprint server MedRxiv and not yet peer-reviewed, determined that the U.K. variant arrived in the U.S. as early as late November, though it wasn’t detected until late December.

"Our study shows that the U.S. is on a similar trajectory as other countries where B.1.1.7 rapidly became the dominant SARS-CoV-2 variant, requiring immediate and decisive action to minimize COVID-19 morbidity and mortality," the study authors wrote.

The research team analyzed 212 American B.1.1.7 genomes and half a million COVID-19 tests to estimate how quickly the variant had spread. 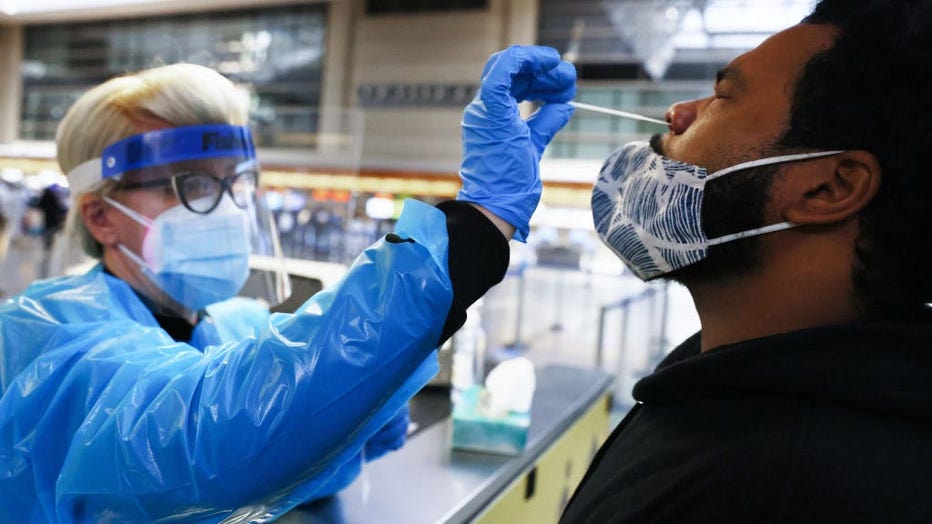 To date, the CDC has detected at least 690 cases of the U.K. variant in 33 states. Another troubling variant tied to Brazil and a third discovered in South Africa have also been detected in the U.S. and are also expected to spread.

A concerning mutation shared by the Brazil variant and the South African variant, named E484K, has also recently been identified in several UK B.1.1.7 variant cases. Research has suggested that the E484K mutation in the spike protein may help the virus evade antibodies.

Variants, or new versions of viruses, regularly emerge — and viruses are constantly mutating. To stay ahead of the threat, scientists analyze samples, watching closely for mutations that might make the coronavirus more infectious or more deadly. But such testing in the U.S. has been scattershot.

Less than 1% of positive specimens in the U.S. are being sequenced to determine whether they have worrisome mutations. Other countries do better — Britain sequences about 10% — meaning they can more quickly see threats coming at them. That gives them greater opportunity to slow or stop the problem, whether through more targeted contact tracing, possible adjustments to the vaccine, or public warnings.

New CDC Director Dr. Rochelle Walensky said the U.S. is "rapidly ramping up surveillance and sequencing activities" to closely monitor and identify variants, something infectious disease experts have said is needed to stay ahead of the threat.

"There have been recent positive moves, and there has been an increase, but it has not been at the level that would be required in order to catch the imports and know about things early enough to make a difference," said Dr. William Hanage, a Harvard University infectious-disease researcher, of genetic sequencing in the U.S.

"We’re moving in the right direction, but we still have a ways to go," Hanage added.

More serious strains of the virus that has killed more than 463,000 Americans have created a new urgency to speed up vaccinations. Dr. Anthony Fauci, the nation’s top infectious-disease expert, has called on Americans to get the vaccine as soon as they’re eligible to prevent further mutations. He added that vaccine makers should be "nimble to be able to adjust readily" to make tweaks to the vaccines if needed.

"Viruses cannot mutate if they don’t replicate," Fauci said. "And if you stop their replication by vaccinating widely and not giving the virus an open playing field to continue to respond to the pressures that you put on it, you will not get mutations."

Public health experts say masks and social distancing will also continue to be effective in limiting the spread.